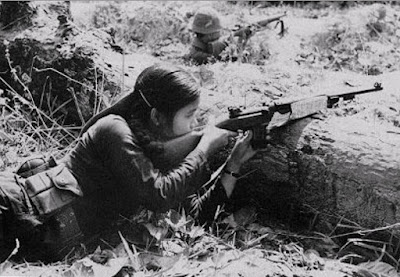 If one side in a civil war cannot win without massive foreign support, it is a sign of fatal weakness.

Take the Vietnam War.
All North Vietnamese soldiers were Vietnamese.
In contrast, South Vietnam relied on massive US troop presence and even South Korean troops to prop up its regime and system. North Vietnam had the decisive advantage. Its military was manned by proud patriots. South Vietnam was decadent and under neo-imperialist hegemony. It lacked conviction and cared only for pleasure & profits, the bulk of it going to the Chinese minority. So, not many in the South were willing to fight and die for what the system stood for. The South relied on (what were essentially)mercenary forces from the US and South Korea.

US soldiers had no idea why they were in South Vietnam. They were told something about stopping evil communism and all that. But Americans didn’t care about the Vietnamese(who, in turn, didn’t care much about Americans) and grew cynical. They had low morale and had to be bribed with R&R to keep fighting. They were given generous rations to drink, party, and bang whores.
And S. Koreans served as a mercenary force that received equal pay as the Americans. But without US money, South Korea had no reason or will to fight. In contrast, North Vietnamese were fighting for nation and pride. They had a sense of value beyond money and materialism.

North had the will, cohesion, and conviction on its own. Even though it received extensive aid from USSR and China, it did all its own fighting. In contrast, the South had no will and no pride. It could only be propped up by outside mercenary forces. On its own, South was doomed, and indeed the North soon prevailed over the South once the US left.

Similar dynamics is at play in the crisis now engulfing the West. There is a civil war of sorts between globalist whites and nationalist whites. In some white nations, the nationalist whites have an advantage over the globalist whites. Nationalist whites tend to have a sense of roots and identity. They feel a powerful connection to the land beneath their feet. (This is evident in Poland and Hungary.) They are more likely to have a sense of core morality. They are more likely to have national, racial, and cultural pride. As such, they have a sense of meaning, direction, and power in being what they are and being with others like themselves.
In contrast, globalist whites(despite their education and affluence) tend to be decadent, demoralized(except in the virtue-signaling of self-loathing, what with their moral pride being predicated upon racial suicide), directionless, rootless, and spineless(again, except in denouncing their own race). With such negativity, they are bound to comprise the minority of whites in any healthy nation where whites have woken up to what’s really at stake. Besides, most people aren’t ethno-masochists.

The reason why some white nations abnormally have more globalist whites than nationalist whites is because the elite institutions are controlled by globalist Jews and their cuck-collaborators who spread PC and Homo-?egro pop culture to whites from cradle.
But if white national consciousness were given a chance, it is bound to grow and expand because people like to feel good about their own kind. It’s like many Vietnamese had been resigned to French imperialism, BUT once the nationalist flame got going, it could hardly be contained and eventually spread like a wildfire.

Just like the South Vietnamese regime felt it had no chance without foreign mercenaries, globalist whites(who are really unwitting shills of Jewish globalists) are beginning to feel that they have no chance without foreign mercenaries of Diversity or non-white ‘immigrants’. These are immigrant-mercenaries or ‘immercenaries’ in the sense that their ONLY commitment to the West is materialistic. They have no concern for western identity, culture, or history. They just come to the West for money and materialism. For those goodies, they are willing to destroy nationalist whites… just like South Korean mercenaries were willing to kill tons of Vietnamese patriots for $$$ in the Vietnam War.

If not for Immercenaries, Virginia would still be a Red State. It was non-white immercenaries who flipped California into a blue state. Indeed, many states would be Republican if not for the Immercenary Factor. (To be sure, GOP has been mostly useless as all politicians in the US are controlled by Jews.)

Granted, there is one crucial difference between the US and Divided Vietnam during the war. The nationalist Viets had a solid base in the North. So, the Viet Cong soldiers fighting in the South could rely on solid support from the North that was wholly independent of US imperialism.
In contrast, all of the US is like South Vietnam. All of it is occupied by the GLOB. All the federal & state governments, all the institutions, all the industries. So, White National Liberationists(a more accurate term than ‘white nationalists’) are like Viet Cong but without the backing of a solid base of power. In North Vietnam, all the institutions were controlled by patriots. So, the Viet Cong could at least rely on hardcore nationalist North Vietnam in their war with South Vietnam then under neo-imperialist US hegemony.
In contrast, the Alt Right and Nationalist Whites have no such backing. Some see Russia as the support system of nationalist whites, but Russia is non-interventionist(despite all the Jewish hysteria and cooked-up paranoia) and, being an imperial-nation in its own right, not so keen on ethno-nationalism that might upset Muslim minorities.

Still, once true nationalism replaces cuck-conservatism, White National Liberationists will be more passionate and committed than the globalist whites whose main passions are ridiculous homo-worship, Negro-worship, servility to Zionists, and racial self-hatred.
In the end, a people who love their own kind have advantage over those who hate their own kind. This is why globalist whites everywhere fear that they cannot win in the long run against nationalist whites. They can win ONLY with non-white immigrants as mercenaries who side with globalist whites PURELY for $$$ and materialism. After all, what is the main reason why immigrants come to the US? Principles? Ideals? No, they come for $$$.

If the only means of politics will continue to be elections, the globalist whites may well prevail because immercenaries, as ‘new citizens’ eager for $$$, will keep coming and vote for globalism. All of America and even EU could end up like California.
But if it comes to a shooting war, nationalist whites will be like the North Vietnamese and the Viet Cong. They will have something to live for, kill for, die for. They won’t be fighting for money.
In contrast, the immercenaries will take up arms only for money. As for globalist whites, what is their great cause? Racial suicide. Is that something that people are willing to die for? Suicidalists may welcome their own demise, but they are not willing to die for it.