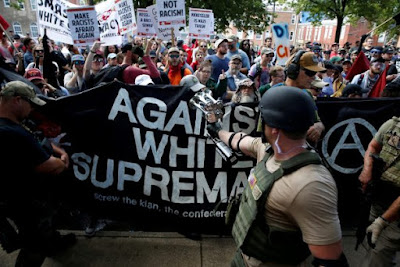 In order for White Libs to push their Cosmo-Prog agenda, they must rely on blacks and non-white colonizers for votes. But many of these non-whites are not into Cosmo-Prog agenda.
They vote for Democrats only because they want Open Borders(so that more of their kind can gain access to the material wealth of the US) and Federal programs(without which blacks would be totally lost). It’s purely mercenary, not ideological.

It’s like the European proggy ‘left’ depends on Muslim and African voters who don’t care about the cosmo-proggy agenda, especially pertaining to Gay Rites and Queertianity. Oftentimes, these non-whites are even less proggy than native ‘rightists’ and ‘conservatives’ are. Yet, they vote for the Proggy party because it offers them access to the material goodies of the better-managed West.

What will result from all such twisted symbiosis? Virginia and France turn more proggy because the Prog elites win with votes of non-whites who generally aren’t proggy. These non-whites vote for the Prog party not for ideals but for free meals. They just want more Open Borders and Bigger Government. Their reasons are tribal, material, or mercenary.

But I guess the Progs don’t much care. They figure Asians, being docile and subservient, can easily be turned onto Proggy values via education, and this is indeed happening with dog-like East Asians and even Hindus to some extent. As for Mexicans, they will never amount to much and remain as docile labor force at the lower rungs of society. They will supply the votes to put progs in power, but progs won’t offer anything to Mexicans but open borders and tortillas. When it comes to macro social and political policy, Jews and Homos will get to decide.

Still, at some point, the system could easily break. And we see inklings of this in California. Especially with declining white power, there’s bound to be more bitterness among progs and people of color. And in Minnesota, Somalians and Progs are not seeing eye to eye on lots of things despite their united front against Conservatives(who are mostly cucks anyway).

White masses want white elites to represent and lead them. They hope, but it’s not happening.

This is why Alt Right can play an important role. It is about creating a New White Elite class who will listen to white masses and lead them. And this New White Elite will not collaborate with the Zionist-Globalists.

But try talking sense to whites who’ve been brain-cancered into thinking it is a GOOD THING that whites will be minorities in their own nations. It’s part of their mantra.

It’s like all those idiot college students cheering Clinton’s speech that extolled a future in which whites will no longer be a majority in America.

What morons. A few slogans — "Diversity Is Our Strength" — repeated like nursery rhymes in their heads, and they really believe in the mantra. ‘Diversity’ and ‘Inclusion’ are their ‘charm of making’.

With whites especially, ideographics matter. Whereas non-whites tend to overwhelmingly vote one way(Democratic), whites are more divided by ideology. Jews made it this way by vilifying white identity. So, while blacks, browns, yellows, Hindus, and Muslims are urged to vote for their tribal-political interests(on the assumption that the Democratic Party is better for them as racial or ethnic groups), whites are denounced and demeaned if they show any racial consciousness. So, white conservatives can only be implicitly white while white Progs are stridently anti-white. While whites aren’t allowed to be pro-white-conscious, they are encouraged to be aggressively anti-white-conscious. Any white person who denounces her own race as wicked and ‘racist’ are favored by the Jewish Power. So, there is more ideological divisions among whites since white identity is taboo. So, white politics is ideographic than demographic. Many more whites than non-whites group together along ideology than identity.

The ideology of too many whites is anti-white. They see anti-white betrayal as a virtue. They’ve been educated in such manner since cradle by Jews who control media and academia. Look at white states like Maine, Minnesota, and Vermont. Demographically white but ideographically anti-white.

In a nation where ‘racism’ is seen as the worst evil — and even most on the Right use ‘racism’ as pejorative — , too many whites think that any white identity or interest is ‘racist’ and evil.

Despite demographic changes, GOP could have won Virginia if whites stuck together. But they didn’t. 41% of whites voted for Democratic and more Diversity.
(Granted, even white conservatives may welcome Diversity because they feel immigrants are preferable to blacks, socially and economically.)

Prog elites make a distinction between Democracy vs Populism, arguing that nationalist-populists are actually an hindrance to true democracy and political pluralism.

Okay, so let’s look at the political result of a state that totally destroyed the power of populist-nationalists through mass invasion and PC lunacy. Let’s see how democracy thrives under such conditions. Let’s consider California! So, just how democratic is that state? Isn’t it a total one-party dictatorship. Doesn’t it have the biggest division between rich and poor. The most strident restrictions on free speech? And Antifa goons running amok and attacking people with differing view?

Are we to assume that all of the US will be more democratic if it follows the California model?

California is about Tribe-and-Bribe. The ruling Jewish Tribe brought over tons of non-whites and bribed them with welfare and chain migration IF they vote Democratic and hate on Whitey.

Tribe as ruling elites, white cucks and Asians as their managerial class, and everyone else as helots too divided by race, culture, and faddish ideologies to ever form a common front. And Progs more allied with Hollywood and Silicon Valley than with working class and middle class(that continues to move out of Ca). What wonderful democracy they have in Calfornia.