Race Denial Is No Longer Tenable - Ideology Is Downstream from Iconography 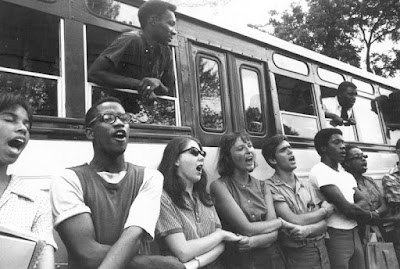 Following WWII and the demise of Nazism(and revelations of its horrors) and prior to the explosion of race problems in America(and now in Europe as well), one could forgive the sincere belief among intellectuals, social scientists, and politicians that race is essentially a ‘social construct’ and, once equality was assured under the law, all races could achieve more or less the same. If intellectuals were wrong about race reality and racial differences back then, it was more out of naivete or idealism than dogma, cowardice, or some pernicious agenda.

But after several decades of social experimentation, it should be clear to any honest person that racial differences are all-too-real and account for the persistent problems of race, especially pertaining to blacks. But because of the pervasiveness of PC as status symbol(as political incorrectness will invariably lead to blacklisting or demotion in the choicest careers), iconography of holy relics(as Jews, Negroes, and Homos are now objects of mandatory reverence), and radical violence as forms of intimidation(as heretics & dissidents face real danger of being physically assaulted by Antifa thugs, BLM lunatics, or screeching campus fanatics), most academics and media people are FORCED to be dishonest, FORCED to ‘not know’ what they, in the heart of hearts, know.

We can forgive a white liberal in the 1940s, 1950s, and even in the 1960s for believing that black conditions would be vastly improved with new laws and federal programs because, after all, blacks(along with other non-white races) had been denied equal opportunity in America. But after several decades of undeniable proof of black advantage in muscle power, black impulsiveness, black aggressiveness, and black psychopathy that tends toward obsessive egotism & narcissism, one has to be willfully disingenuous or just plain delusional to insist that the racial problems in this country owe to the legacy of slavery and ‘Jim Crow’.

It’s no longer about Jim Crow but ‘Radio Raheem’(the obnoxious thug of Spike Lee’s worthless DO THE RIGHT THING), the kind of moron who is all too common in black communities across America. The problem is too many Negroes who act like ‘nogs’ and carry this ‘groid’ gene that makes them tougher, more aggressive, more impulsive, and more psychopathic. After decades of black rampage against other races(and among themselves), this fact should be plain as day, but the tyranny of political correctness prohibits honest discussion of race that locates the black problem as rooted in genetics. As a result, we are left with praising everything black(as if even Problem Blacks are really just misguided and misunderstood victims of the System)and blaming anything white as explanation for the failures of the black community.

PC is an excuse-making machine that blames external white forces for all that stinks in the black community. (This is all the more disingenuous because it is the problematic nature of blacks that is hyped and sensationalized as ‘cool’ and ‘badass’. So, the very white progs who insist something must be done about black gangsta culture of mayhem and murder also promote it as ‘authentic’ and something worthy of emulation.) The idiot critic Andrew O’Hehir at Salon surmised(or pontificated) that Detroit’s decline owed to envious white racism’s punishment of Motown. Apparently, white folks decided Detroit must go down because Smokey Robinson wrote too many groovy songs.

To be sure, conservatives are hardly better on the Race Issue; they also play by the PC songbook in their own way. So, we are told that Detroit was ruined by Liberalism, socialism, and the Democratic Party. Apparently, it had nothing to do with race, specifically the naturally destructive tendency among blacks. If so, why are some white-majority cities under Democratic rule among the richest in America? Why is San Francisco and Manhattan, two very Liberal cities, overflowing with wealth and privilege despite their ‘big government’ policies?

Or consider how Ann Coulter blames lowly black behavior on the Democratic Party, as if blacks would have acted better under Republicans. So, how are blacks acting in Republican Alabama or Texas? Or channeling Thomas Sowell, Ann Coulter muses that blacks learned how to be violent from Scotch-Irish hillbillies, a notion that would imply that Black Africa was an Edenic paradise of peace and harmony when, in fact, it was inhabited by spear-chucking savages from time immemorial. Why is there so much nonsense about blacks?

Political Correctness isn’t just about ideas & issues but also about idols & icons. In a way, the power of idolatry & iconography is more crucial to the sway of PC. After all, even as the ‘right’ and the ‘left’ differ in their explanations & proposals of the Black Problem, both sides are agreed that blacks, along with Jews and even homos, must be treated as a preternaturally noble and holy people, a Magic People. Despite differences in ideology, the American ‘right’ and American ‘left’ are agreed on the icons. It’s like the conflict between Catholics and Protestants or between Sunnis and Shias. Despite doctrinal differences, they worship the same gods or icons. So, ‘iconology’ > ideology. While ideology offers explanations, ‘iconology’ determines what or whom should be worshiped. There is a reason why Jews, homos, and Negroes have special iconic power in the US. Part of the reason is obvious: Jews control the media and decide which people should get favorable attention and adoration. But it’s also because Jews, homos, and blacks have special talents. Jews are especially good with intellectualism, science, business, and humor. So, they are admired as people of superior skills whose achievements continue to do wonders for all humanity. Jews also promoted the Cult of Shoah. As for homos, they are naturally fanciful, flamboyant, & narcissistic, and in our Age of Vanity & Hedonism, those qualities count for a lot. As for Negroes, they dominate sports, pop music, and sexual symbolism. For many whites, nothing is worthier of worship than the black ‘twerking’ booty and the black dong. Andrew Breitbart once said "Politics is downstream from culture." Sometimes, ideology is downstream from iconography. People are captivated by something first on the sensory level and then seek rational or ideological explanations to justify their fixation. It’s like the John Hurt’s closeted homo character in LOVE AND DEATH IN LONG ISLAND who is so enthralled by the iconic sexuality of some second-rate actor that his mind follows his heart and balls.
at March 02, 2018