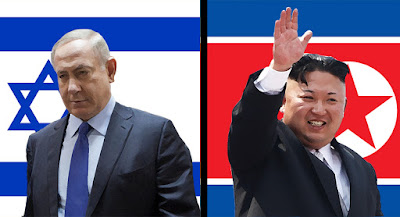 North Korea’s survival strategy is brutally simple: “If you invade us, we will blow up South Korea and maybe even Tokyo.” North Korea is ruled by a vile regime, but its concern for survival is politically rational even if it has no moral right to exist. But then, South Korea, the perennial puppet whore of US globalist empire, is hardly better. Though an advanced democratic state, it is demographically dying and culturally decayed.
Now, if North Korea were ruled by wiser people, it could have made an intelligent argument for possessing nuclear weapons: To ensure national defense & survival, given the recent American record in the Middle East and North Africa. Especially in Libya, the US took out the regime despite Gaddafi’s having caved to Western demands on development of WMD. Gaddafi was led to believe in a new dawn of good relations with the West, only to see the Zionist-controlled West cook up some excuse to decapitate his regime and cackle over his lynching. So, given the US record as a neo-imperialist power, the North Korea could have made a sane and sober argument in justification for nuclear defense against potential US invasion, especially since the US keeps staging more military drills with South Korea to intimidate the North.
Alas, North Korea is ruled by an egotistical brat whose idea of culture is imitating the style of basketball and rap thugs of America. His idea of good relations with the US is fawning over a freak like Dennis Rodman. Kim Jong-Un just acts like Bam-Bam of Flinstones and gives the impression he wants nukes as personal toys to have fun playing a 007 villain.

Interestingly enough, as different as North Korea and Jewish Power are, they have one thing in common: WGYG or We Go, You Go. The idea is that if they are destroyed, they will take others down with them.

Jewish Power employed this threat in 2008. When the government didn’t bail out Lehman Brothers, Wall Street pushed the ‘too big to fail’ scheme and threatened Total Collapse of the Economy UNLESS it was showered with super bailouts, which eventually came to enrich the banks and investment firms even further during a severe recession in which so many Americans had to tighten their belts around their fat waists.
George W. Bush couldn’t do anything but go along. Obama promised something radical and different in his campaign but just bailed out Wall Street once he got in office. And McCain would have done the same had he won. Jewish Wall Street power held a gun to the head of the entire US economy and said ‘Give us money, OR we will take you down with us.’

The system has been rigged with explosives so that a major collapse of Jewish Power will set off total collapse of the whole economy. The fuse runs through the entire system. The whole edifice will come tumbling down like the Philistine Temple when Samson toppled the pillars. And, if anyone tries to cut the wire of Jewish explosives, kaboom, the whole thing blows up, and everyone dies. Gentiles must carry Jewish Power like a crate of nitroglycerin. One false step and it’s Kingdom Come.

Even Israel has a similar mindset. Though Israel’s main reasons for nukes is to intimidate Muslim nations, they are also meant as a global threat lest Israel were to fall due to insufficient Western support. In other words, Israel will take down Europe along with it. So, unless Europe does everything possible to prop up Israel against its enemies, it could expect nuclear missiles from Israel if Zion were to fall. In other words, Israel will not go down alone. It will take the world down with it. Even if Europeans aren't the ones to destroy Israel, they will be nuked just the same IF Jerusalem were to fall once again.
So, Europeans damn well better make sure that Israel is secure forever. Otherwise, Jews will not experience the next holocaust alone. They will spread and share it with the world.