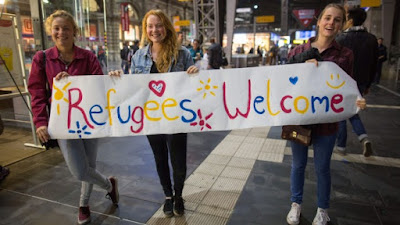 The reason why Western Globalists side with ‘migrants’ on some instinctive level is due to European Imperialist Legacy. European ‘migrant’ colonists arrived on other lands and gradually and then dramatically took over. It’s like the Pilgrims first arrived as ‘refugees’. And British convicts arrived as migrants in Australia and took over.

Newspapers like the Guardian are left-imperialist. They believe any people have the Human RIGHT to barge into other lands and colonize them. It is a retro-justification for European imperialism, just like Diversity Cult justifies past imperialism that forced Diversity on the world.

Using Guardian Left-Imperialist Logic, No people have a right to defend and preserve their nation and culture. All nations must be Tibetanized or Hawaiianized, i.e. invaded and transformed by migrant colonists. (But Israel gets Pass-Over privileges.)

The conversion-consumption mentality has come to define every aspect of Americanism and the West.

A missionary is bored with existing Christians. His excitement and joy derive from converting heathens into New Christians. So, he seeks out yet more heathens to convert. He gets his thrills that way. Already-Christians are boring. The glory comes with saving new souls for Christ. It’s like a hunter is bored with trophies on the wall. He wants to kill new animals. A fisherman is bored with caught fish. He wants the excitement of catching new fish.

Same goes for shopping and collecting. A woman is bored with clothes and shoes in the closet. The joy comes from buying New shoes and clothes. The new stuff could be no better or even worse than the stuff she already has, but there is excitement in newness itself.
And book collectors keep getting new books even though old ones go unread because of the excitement of getting new stuff. And people want to travel to new places to feel the thrill again.

So, even illegals are ‘dreamers’ for 'progressives' caught up in the missionary zeal of 'converting' non-Americans into New Americans and saving their bodies(since we no longer believe in souls) with consumerism. And the future is always seen as more hopeful than the past or the now. As Scarlett said, “Tomorrow will be another day.” And Annie sang about Tomorrow. America is to be Tomorrowland.

But as the retro-nostalgia of TOMORROWLAND showed, there can be no tomorrow without yesterday. And BACK TO THE FUTURE shows future owes to the past. And the Renaissance was about advancing into the future by regaining lost knowledge, culture, and glory.

Progs are into missionary zeal. They are about converting others into New Americans or New Europeans.

Conservatives are more into the born-again mentality. It’s about rediscovering the truth within you and drawing excitement from such realization via re-connection. To be born-again means to realize what’s inside that has been ignored or forgotten.

Hilary was into converting the world. She is missionary-istic.

Trump’s MAGA message is Americans must be born-again and find glory in the Americanism they'd forgotten. It is 'baptivistic', to be born again, to become who you are.
at February 27, 2018