If Twitter Is Really Serious about Banning Violent Groups, It Should Begin with Zionists and the Deep State 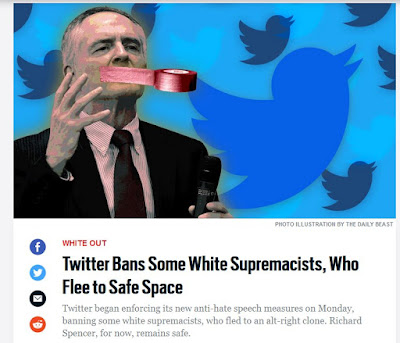 Jewish-run media outlet Daily Beast lies, but then, what else is new?

Jews at Daily Beast gloat ‘Twitter bans white supremacists’(especially Jared Taylor), but in fact, what’s happening is Jewish Supremacists of ADL are pressuring Twitter to ban White National Liberationists who refuse to serve as White Submissivists at the feet of Neocon Zionist overlords.

Daily Beast says ‘white supremacists flee to safe space(of Gab)’, but in fact, they were forced out, just like Palestinians were forced out of Palestine(soon to become Israel). They didn’t voluntarily flee, just like Palestinians didn’t voluntarily flee to Jordan and West Bank; they were pushed into those areas by Zionist pogroms and acts of terror.
White National Liberationists were more than willing and more than happy to stay on Twitter and trade ideas and engage in discussions with friends and foes alike. It is the Jewish Zionist Supremacists who demanded that Twitter be a Safe Space for Zionists and their globalist agenda. No one fled to Gab. They were forced out of Twitter and signed up at Gab, just like Palestinians who were expelled from Palestine(changed by Zionists into Israel) found refuge in West Bank or Jordan.
Also, Gab is NOT a safe space. It is not a platform that only allows one kind of views and protects them from other points of views. It is OPEN TO ANYONE who appreciates true free speech. It’s for people with courage and thick skin to be confronted by others with contrary viewpoints. Gab does have white supremacist types, but they don’t get to force Gab to purge people they don’t like. In contrast, Jewish supremacists get to force Twitter to purge enemies of Jewish Supremacism. This is why Twitter not only banned Jared Taylor but suppresses BDS and Palestinian voices. 2018 is the 70th anniversary of Nakba, but try getting the hashtag #Nakba70 on Twitter. As Twitter takes orders from ADL, much of pro-Palestinian voices are suppressed, banned, or shadow-banned. Twitter calls itself ‘progressive’, but if it really cares for the little guy and the underdog, why does it work with ADL and Zionists than with BDS and Palestinians? Surely, anyone with even a modicum of knowledge about world affairs knows that Palestinians are the ones being crushed and destroyed by Zionist imperialists. Twitter is what it is because it’s run by globalist elites and because it wants more money from Jewish investors.

Anyway, Twitter is now one big safe space for Jewish Supremacists who push wars and imperialism all over the world.. If Twitter really wants to ban Hate, it should purge all the Zionists and Neocons. Isn’t it funny that Twitter releases a statement that it will not tolerate anyone affiliated with violent groups but gives free reign to some of the most violent, destructive, supremacist, and imperialist forces on Earth?

If Twitter is truly sincere about banning violent voices and figures on its platform, I have some sound advice. They are as follows:

1. Twitter must purge the Zionist Neocons. Theirs is an ultra-violent agenda that hates & oppresses Palestinians, wages Wars for Israel, and aids terrorists to destroy secular/modern Muslim nations. Neocon-Imperialism under George W. Bush and Obama has killed a million Muslim lives and forced millions more into refugee status. Obama and Hillary’s support of proxy terrorists in Libya and Syria have turned entire cities into disaster areas and led to the ruins of many ancient treasures.

2. Twitter must purge those connected to the Pentagon & US military complex. This ugly beast is supremacist with jingoist talk of ‘American exceptionalism’, implying the US has some divine right to invade any nation & meddle in world affairs. It is a hateful, contemptuous, and murderous attitude. .
In contrast, the brave Alt Right has denounced US imperialism and taken an anti-war stance. This is the real reason why Jewish Supremacists hate the Alt Right. Alt Right’s call for universal nationalism and sovereignty for all nations undermines the project of US hegemony all around the world. National Sovereignty Matters. The US has no right to play police of the world and club any nation that won’t submit to the Dollar supremacism and Homomania of the US.

Unlike the MSM that’s nothing but a Deep State propaganda tool, the Alt Right denounces Trump when he acts like an imperialist and threatens other nations. In contrast, Jewish globalists, Deep State, and MSM(totally controlled by Jewish supremacists) support Trump only when he spouts jingoist nonsense against Russia, Iran, and whatever nation that Jews(and Israel) happen to hate at the moment. If anything, Jews fear Trump will improve relations with Russia. According to the logic of Jewish supremacism, If Jews hate Russia, all Americans must hate Russia. American passions are just cattle to be steered by Jewish likes and dislikes. By spreading lies about Russia-hacking, Jews have poisoned the minds of countless Americans(who’d previously felt no ill-will toward Russia) to hate Russia far more than Americans hated the Soviet Union during the Cold. Indeed, isn’t it funny that many Jews sided with the USSR and attacked American patriots during the Cold War — following WWII, some Jews even sent atomic secrets to Stalin — , but these very same Jews and their children and grandchildren are the ones who are now most virulently anti-Russian SIMPLY BECAUSE Russia refused to surrender its national sovereignty to Jewish oligarchs and cuck out to the Jewish imperialist proxy agenda of Homomania.

While the Alt Right is trying to defuse tensions and promote peace and tolerance among nations, Jewish supremacists tighten their grip on the US as their private bitch, body guard, bouncer, and hitman to go around bashing nations they don’t like. Jews cannot tolerate the US as neutral power that is fair and balanced to all nations. Jews insist that the US must love what Jews love and must hate what Jews hate. Since Jews love Israel, the US must love Israel. Since Saudis are chummy with Israel, the US must go easy on Saudi Arabia. But since Jews hate Iran and Russia, the US must hate them too. So, if Twitter is really serious, it should ban Zionist psychopaths like Jennifer Rubin and Max Boot. They work for Jewish supremacists who use media and state to pressure and brainwash all Americans to hate other nations.

4. Twitter must purge all rap moguls who promote ugly music that celebrates drug trade, gangsterism, and murder and trashes womenfolk as ‘skanky bitchass hos’. This kind of culture has spread murderous hatred in the black community, destroyed families, and sent many to early graves. The violence in Baltimore and St Louis is the product of Jewish and black moguls promoting murderous and hateful attitudes via rap culture.

5. Twitter must purge Homomaniacs who have gone far beyond the call for ‘gay rights’. They now demand Gay Rites as new religion and support the use of US capitalist-imperialism to convert the entire world to Worship of Holy Homo. They hate decency, family, tradition, and morality. Their hate any normal person who will not convert to the culture of degeneracy. But then, Homomania is a mere proxy of Jewish Supremacism.

6. Twitter must purge the ADL that spews hatred against BDS, a movement for justice for Palestinians. ADL is a hateful Jewish supremacist organization that demands that all US politicians collectively hate Palestinians and criminalize BDS that pleads justice for Palestinians who suffered the mass-pogroms of Nakba and now live under apartheid-occupation in the West Bank and under Warsaw-ghetto-like conditions in Gaza.

7. Twitter must purge Jewish supremacists of MSM(like those at Daily Beast) who hate free speech, liberty, free flow of ideas & memes, and the principle of fair play. Jewish supremacists of the Big Media(all monopolized by Jews) rig the game so that their Zio-Homo narrative gets preferential treatment while counter-voices are suppressed. Jews use power of finance to push their agenda. Jews told Twitter, “Big money for you IF you let ADL purge white national liberationists who refuse to serve as white submissvists at the feet of Jewish supremacists.”

Daily Beast is merely a megaphone of Jewish Supremacists who push for more Wars for Israel. The real supremacism in America is that the 2% rules over the 98%.
The ‘Twitter Purge’ is really ADL purge of those who see the reality of Jewish supremacist power and call out on it.