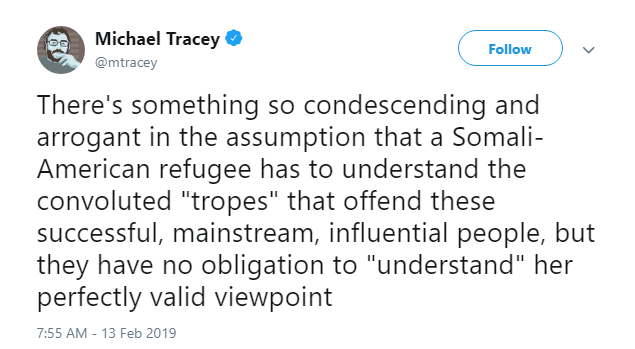 COTF(Coalition of the Fringes) is really a Judeo-Centrism. It's not about equality among minority groups but about non-Jewish minority planets revolving around the sun of Jewish Power. Notice that neither Charles Blow nor Sarah Jeong says anything much about Jewish Power or Zionist Occupation of West Bank. They are colored planets around the Jewish sun. And Ilhan Omar the Somali Congressman from Minnesota was meant to be a planet too. Jewish solaristics say, "White Sun bad, so color planets should revolve around Jewish Sun to fight evil white sun." Omar's sin was she suggested at Islamo-centrism. Instead of being a dutiful planet revolving around the Jewish sun, her truth sees Islamism as the core truth, the real sun. This messes up the gravitational laws of Jewish solaristics. For most blacks, Asians, Hindus, and Mexicans, what Jews are doing to Palestinians and Arabs doesn't really matter. They have no personal or tribal dog in the fight. So, they figure on playing the game and moving up the ladder by revolving around the Jewish sun that hogs the light and power. But Muslims do have a dog in the fight because so much of Muslim Consciousness has been about 'Evil Zionists crush Palestinians and attack Arab/Muslim nations'. Indeed, Muslim media and propaganda in Africa and Middle East are as anti-Zionist as Jewish-dominated Media in the US are anti-white. Muslims grow up inhaling this stuff as The Truth, just like PC-addled people in the US inhale anti-white-ism.

Another problem with Jewish solaristics is that the Evil White Sun also revolves around it now. Jews vilify whites the most, but whites make the biggest stink about how much they love Jews and Israel. Jews need this white support for Israel but also find it troublesome because it associates Jewish power with 'white racism'. If white sun is so evil and must be opposed by Jewish sun and its loyal color planets, why is it revolving around the Jewish sun and praising it?

It used to be Anglo-American Sun was at the center of America. And initially, Jews were an ethnic planet that revolved around the Anglo-American Sun... as did other ethnic-planets. But then, Jewish planet got radioactive and began to generate its own heat and became another sun. So, America became the ever-expanding Jewish sun revolving around the ever-dimming Anglo-American sun. But it's unstable for a solar system to have two suns. Should Jewish sun keep revolving around Anglo-American sun, or should Anglo-American sun begin to revolve around the Jewish sun? Anglo-centrism or Judeo-centrism? Around the time Cold War ended, the White sun began to revolve around the Jewish sun. US went from sentimentalizing the UK as special motherland to regarding Israel as its 'greatest ally'. US dropped the 'racism' of favoritism for Northern Europe and took up the 'progressivism' of favoritism for Israel. Why is favoring Jews over Palestinians a form of 'progressivism' than 'racism'? You got me. I guess control of the Word trumps the way of the World.

But Jewish Power was still not content with the White Sun revolving around the Jewish sun. As long as the White sun remains a sun, it challenges the mono-supremacy of the Jewish sun. It is typical Jewish mentality rooted in ancient habits: Jewish God is the only god, all other gods are false. So, Jewish sun is the only sun, and there shall be no other sun. Jewish sun power came from elite control of institutions and industry. As whites lost those areas to Jews, white solar power resided mainly in numbers. Whites were still the majority. Jews had quality sun power, whites had quantity sun power. So, Jews figured even THAT must be destroyed. If whites were to lose majority power, they will no longer constitute a sun and become just a planet wholly dependent on Jewish sun for light and sustenance. It will have no auto-generative power. Donald Trump won in 2016 purely due to quantity power. As virtually all the elite institutions and industries(even on the establishment 'right') were against Trump, he had only white populism to rely on. If white quantity power goes, white power got nothing. Whites will lose sun status and be just another planet.

Anyway, in the Jewish attack on white power, it needed Janissary and mercenaries. Jews may have elite power, but that is never enough. Just like generals need soldiers, Jews need the numbers. As they don't have it themselves, they gain numbers by the Janissary way and mercenary way. Janissary are white people brainwashed by PC to hate their own kind. Turks did this with Greek and Slavic boys. Ottoman empire scoured Christian areas under its control and conscripted the healthiest, strongest, and most intelligent boys. These Christian boys were trained in Islamic military academies and converted and trained to be rabid and virulent enemies of Christendom. Jewish power has done this to so many white kids via academia(for elite white kids) and idolatry(for white masses who become addicted to rap music, jungle fever, and Hollywood movies where white heroes are those who happily fight Wars for Israel or hate Russia). But Janissary whites weren't enough for Jews. So, Jews used immigration to recruit mercenaries. These non-whites are essentially bribed by Jews with tickets to the US. With tickets not only for themselves but for their relatives and their relatives and etc. As these people realize that their continued passage to white wealth depends on Jewish power and suppression of White American nationalism, they work with Jews even though they feel no love for Jews(and may even resent them). In politics, the choice is often not between what-we-love and what-we-hate but between what-we-hate and what-we-hate-more. It's like Jews side with Neo-Nazis in Ukraine because they hate Russia even more. It's like Saudis side with Israel because they hate Iran even more. So, when whites try to convince Jews to oppose non-white immigration because POC immigrants hate Jews, Jews scoff at the notion because they know non-whites can be made to hate whites even more, thereby siding with Jews. If non-whites hate Jews but hate whites even more for being a bigger obstacle to non-white immigration-invasion of the West, they will side with Jews who are at least letting them in as the New Ellisians.

AIPAC Jews are bitter about Ilhan Omar because she's supposed to be a good mercenary but isn't. Jews support the 'Muslim refugees' and make a big fuss about it for all the world to hear: "We Jews spend big money to bring you guys in to the West against the will of 'racist' white Nazi America." Basically, it means "We pay you to side with us against white people." Most non-whites, wink-wink, understand and play along. Take the Latin-American film-makers in Hollywood. They know who really controls the Film Industry. They know all about Jewish Power. But, because Jewish power is more welcoming of their kind while white America is more resistant, they play at being loyal mercenaries to the Tribe.

But things may be different with Muslims. Islam, unlike Christianity, lacks a soft side. It is militant and proud, just like Jewishness. It has its own kind of chutzpah. Also, Muslims lack 'white guilt' and, as members of POC, have been characterized as 'victims'. Indeed, Jews have been feeding this narrative, not least because 'Muslims as victims of white supremacism' is a convenient smokescreen for the reality of 'Muslims as victims of Wars for Israel pushed by AIPAC'. HAW or Hate-against-White is the glue that holds Jews and POC together.
In contrast, Jews count as whites, indeed so much so that Jews can conveniently repackage Jewish privilege as 'white privilege'. Also, because of the Palestinian issue, both the 'far left' and 'far right' sometimes use Muslims as a proxy against Jewish power. If it's taboo and 'antisemitic' for whites to criticize Jews, it's more complicated when Palestinians and Arabs do it because it is a fact that Zionism oppresses Palestinians and pushes for more Wars for Israel.
Also, white Janissary become awfully confused when it's Jews vs Muslims. Jewish-controlled PC instilled white Janissary with the simple moral formula of "whites bad, non-whites good." So, whom are white Janissary supposed to side with when it's white Jews vs non-white Muslims? Their NPC programming starts to go haywire. No wonder Jews try to distract everyone from all this with 'Gays are Holy'. Omar is either an idiot or savant -- or idiot savant -- when she invoked the tranny business to get some heat off her. She is learning. https://twitter.com/Ilhan/status/1092821831977975808

So, Muslims are troublesome mercenaries for Jews. Besides, Islam is powerful stuff. It has its own solar will to be the center of the world. Even if Muslims may never achieve political or economic mastery, they feel as the spiritual masters of the world. This is why Muslim nations have been more difficult to bend to the will of the West than, say, the East or Latin America. Japan and Latin American nations are awash with 'gay' stuff, but it's almost non-existent in Muslim nations. Pagan Japan and post-Christian Latin America have no core conviction, no sense of eternal or perennial truth. It's all about the fashion and what-is-hot, and that means mindless imitation of the biggest power in the world, the US. The Now is Wow.
In contrast, Muslims always put Faith at the center, just like Jews always put the Covenant at the center. So between Jews and Muslims, it's Core conviction vs Core conviction. Furthermore, Jews can't manipulate Muslims because the latter doesn't have a guilt complex the way Christians do. Muhammad was an unapologetic warrior, not a turn-the-other-cheek saint. So, while Jews could point to how Christians preached one thing but practiced another, they can't pull this trick on Muslims who believe their violence was sanctioned by Allah.

So, the current Jews vs Muslims battle resembles Romans vs Jews in the ancient world. Romans had the military might but they couldn't crush the will of Jews. And Muslims have the kind of will that cannot be crushed, not even with the full might of US and its Pax Judeo-Americana. In the end, profits can't beat the prophets, and Muslims have prophetic confidence.