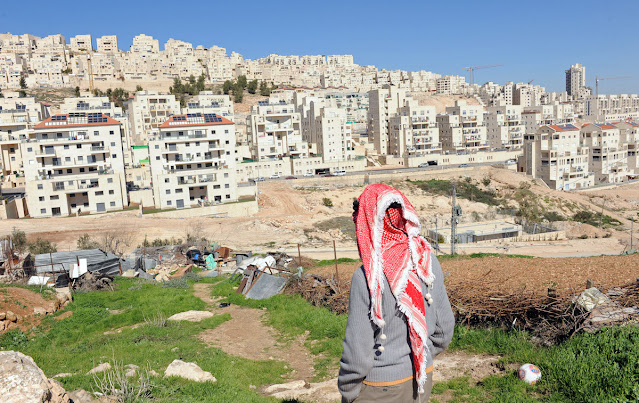 Israel has approved some 4,000 new settlement units as part of a massive settlement project spanning across occupied East Jerusalem and into West Jerusalem, Israeli media reported.

Zionist imperialism demonstrates that Immigration = 'Genocide'. Mass Immigration-invasion led to wipe-out of the American Indians in the 18th and 19th centuries. Mass-immigration-invasion by Conquistadors & other Old World peoples led to permanent defeat of native browns in what is now called 'Latin America'(even though it has much deeper Mayan, Inca, and Aztec roots). Mass immigration-invasion led to the natives of Hawaii losing their homeland to whites and Asians. And of course, it is leading to total eclipse of the Palestinians in West Bank by the way of demographic imperialism perpetrated by Zionist Jews with the full backing of World Jewry. The only kind of Immigration that is safe and beneficial for native or dominant folks of a nation is Replenishment Immigration whereby the newcomers are the same or very similar to the existing population(therefore, easy to assimilate). Otherwise, the grim fate is Replacement Immigration that replaces one people with another.

It seems the Fatah Party in West Bank is as useless as GOP in Congress. It is essentially controlled opposition that talks the talk but never walks the walk. Utterly corrupt and compliant with the Power behind the scenes. It made peace with Jewish Imperialists like Sal cut a deal with Barzini in THE GODFATHER.

People like Ann Coulter wonder why America can't be like Israel in controlling its own borders and immigration-policy. They fail to realize(or refuse to admit) that white Americans have more in common with Palestinians in West Bank. Both white Americans and Palestinians are now under Zionist-imperialist occupation. As the result, Jewish Caravans can stream into West Bank and take over yet more land, and endless tides of brown Caravandals can barge into the US under the political, legal, economic, and 'moral' protection of Jewish American Power. Jews want more Jews in West Bank to create Greater Israel, and Jews want more non-whites in the US to play divide-and-rule among goyim.

It's about time people like Ann Coulter stop asking, "How come we can't have a wall like Israel?" and start asking, "How come we are just like Palestinians in having no effective wall against invasion(and no effective say in immigration policy)?" Walls between Israel and West Bank only protects Israel from Palestinians; they do NOT protect West Bank from caravans of Jewish 'settlers'.

Do people like Coulter understand that the US has had only two elites? Wasps and then Jews, with most of Diversity serving Wasps in the past and Jews in the present.
It makes NO sense to bitch and complain about how current US immigration policy goes against the spirit of what the Founders wanted or how things used to be. The fate of a nation is decided by those with Power Now or Pow-Now. History matters less than Who-has-power-now.
When Muslims took over Egypt, its pagan past was swept aside despite its thousands of years of glory. When Constantinople fell to the Turks, its great churches were converted into mosques. When Japan lost WWII, its culture and customs were irrelevant in the new 'liberal democratic' order conceived and implemented to serve as the puppet of US. And, it didn't matter that Palestinians had been in the Holy Land for 2,000 yrs. When Jews took over, they instantly turned it into a Jewish state. As Jews have Pow-Now, they get to decide on policy over there in West Bank and over here in The West. Jews also get to rewrite history so that the US was always a Proposition nation. And Jewish-controlled BBC rewrites European history so that European historical figures are now presented as blacks.

Whatever the people in the past believed or wanted, they are dead and no more. The Present is controlled by We-The-Living. Sure, people draw inspiration and meaning from the past, but power is about what people do NOW. For example, there is NOTHING in Christian history or theology that blesses homosexuality, but a lot of churches in the NOW(as the result of Jewish intellectual and cultural influence) have decided to worship the holy homo, and that's that. The dead-and-buried cannot return from the graves and save us from the current power. We-the-Living must do it for ourselves in the Now. The Living will always decide. When they die, the next generation of Living will decide. It's like a rich person may leave a will and instructions to his children, but his children will ultimately decide what is to be done with the wealth and privilege. And even if there are legal clauses that bind the children, they can always find top-notch lawyers to re-interpret the will.
at February 25, 2019