"The Jew flourishes when borders come down, when boundaries blur, when walls are destroyed, not erected…. Again, we see, national borders and walls, wherever they rise, tend to trap Jews, not liberate them."

So, why were Jews fleeing from the Nazis? Nazis broke down borders all across Europe. They could access France and the vast fields for Russia for several yrs. Hmmm, funny that open borders under Nazism were bad for Jews back then. Open Borders meant Open Season on Jews.

When Nazis were on the rise, it seems Jews were seeking sanctuary in nations with working borders against Germany.

Under Nazi Open Borders policy, Jews were desperately fleeing as refugees to other parts of the world.

Today, it's Zionist Hegemonic Open Borders policy, and millions of Arabs and Muslims have been uprooted by Wars for Israel and forced to flee their own homelands.
Israel certainly doesn't want Syria to regain border control and keep out foreign Jihadis. Zionists want Syria to remain invaded by foreign terrorists and US mercenary troops. US pretends to remain to fight ISIS but is really there to aid 'moderate rebels' and Kurds against the central government. Why? All because Jewish supremacists control US foreign policy and don't want Syria to recover and recoup as a rival of Israel as Lone regional superpower.

At the height of their power, Nazis were for open borders in Europe because it meant Nazi power could go ANYWHERE. Jews feared this the most. After all, Jews who fled Germany for France were praying that France defend its borders against the German pan-European empire.

The fact that Jews are now so enthusiastic about destroying borders in EU and nations like Syria is proof that they are the main imperialists and hegemonists around the world. Open Borders means invasion by Jewish Power in every corner of the globe.

Imperialists flourish with open borders because they get to invade and 'include'. China certainly includes Tibet, like Japan once included Manchuria and Taiwan.

Nationalists protect and exclude.
Imperialists invade and include.

Anti-Imperialists flourish with secure borders because they can stop invasion and forcible inclusion by the world order. Palestine as a nation would still exist if Arabs had had the means to secure their borders and stop Zionist invasion that came to include Palestine as part of Jewish Empire. Jewish immigration eventually turned into Nakba Pogroms, of which 2018 is the 70th anniversary(but we hear nothing from the Jewish-dominant media), that wiped Palestine off the map.

Jews were not always for open borders. Many Jews had hoped to remain in one city and put down roots. But they were expelled to OTHER PLACES because of ethnic conflicts. And in the case of Old Jerusalem, the Open Borders and Open Invasion Policy sure didn't do much for the Jewish kingdom-state... that was wiped off the map by the invasive-inclusive Romans just like Palestine was later wiped off the map in the 20th century. For much of history, Jewish movements weren't about free trade and opportunity but expulsion and exile.

Eventually, Jews came to appreciate Open Borders because they piggybacked on Western Imperialism. Under protection and reach of British Imperialism, Jews plied the opium trade in China that had been forced open, invaded, and carved up China along the coasts. Because Jewish power has become so synonymous with Western Imperialism(much of which was funded by Jewish capital) and now American Global hegemony(dominated by Wall Street, Harvard, Hollywood, and Pentagon), Jews seek to weaken every gentile nation to gain influence over them. When Russia was opened up to US hegemony in the 90s, it was a grand opportunity for globalist Jews to gain control of policy and totally loot the place.

Also, Iraqi, Libyan, and Syrian borders were destabilized so that Jewish-controlled Foreign Policy could invade and weaken them for the interests of Israel. But these Jews who now call for the destruction of Iranian borders as well are always telling us that we must support and protect the ethnic integrity of Israel. I smell a weasel.

Imperialists and hegemonists want Open Borders. For Jews, this means financial, military, and cultural domination of all the world through Wall Street, Hollywood, Harvard, and Pentagon. And these Jews made a pact with Third World Demographic Imperialists who seek to invade white lands and leech off white wealth. Invade-Invite policy has adherents among Third Worlders. Consider the 'gold star dad' of Hillary's campaign. "You can threaten or invade my country militarily as long as you allow us to demographically invade your country." His family had access to the West, and his son, though Muslim, fought in an anti-Muslim war for the Empire of Judea, of which the US is the Jewel in the Crown. Fareed Zakaria and Nikki Haley are big adherents of this. Bomb Syria! And Let them in.

Ironically, the worst thing for Jews would be for white gentiles to listen to the advice of Jews: Whites should just forgo their white identity and join with rest of humanity and fight against privilege and hierarchy?

OKAY. The main targets will be Jews. Look at UK. Labour whites have given up white identity and joined with POC(people of color) against the Power. And Jews are freaking out because they got so much of it. In the UK, white 'progressives' and socialists side with Muslim immigrants who hate, hate, and hate Jewish-Zionist Power that pushes for Wars for Israel that have already killed over a million Muslims and turned so many into refugees. Jews feign sympathy for refugees but overlook the fact millions were forced into refugee-hood by Wars for Israel.

Trump called for end to Wars in the Middle East during the campaign. In contrast, Jews want more Wars for Israel. Crazy Netanyahu keeps bombing Syria and wants to drag US into a war with Iran. Indeed, one thing that Jews never criticize Trump for is his intermittent saber-rattling(mostly to APPEASE Judeo-Nazis) at Russia, Syria, and Iran. Judeo-Nazis want Trump to be warmongering, hostile, and chauvinist against any people or nation hated by Jews. After all, what is most of media but Judeo-Nazi hate campaign and propaganda against Russia, Iran, Syria, Palestinians(now gunned down at whim by Judeo-Nazis), and white gentiles.

Just ask yourself who the real nazis are. Richard Spencer or Jewish supremacists?

2. Who guns down unarmed Palestinians who are living under apartheid in West Bank and Warsaw Ghetto-like conditions in Gaza? Spencer or the Judeo-Nazis of the IDF?

3. Who financially raped Russia in the 90s and reduced so many Slavic women as sex slaves in a vast white slavery ring? Spencer or Jewish globalists?

4. Who used Wall Street to rape Main Street in the bubble speculations under Clinton and Bush? Spencer or Jewish finance-capitalists?

5. Who made all those Hollywood movies that dehumanized Arabs and Muslims as subhuman terrorists? Spencer or Jewish moguls?

6. Who keeps agitating for more hate, fear, paranoia, and hostility against Russia? Spencer or Jewish hegemonists? 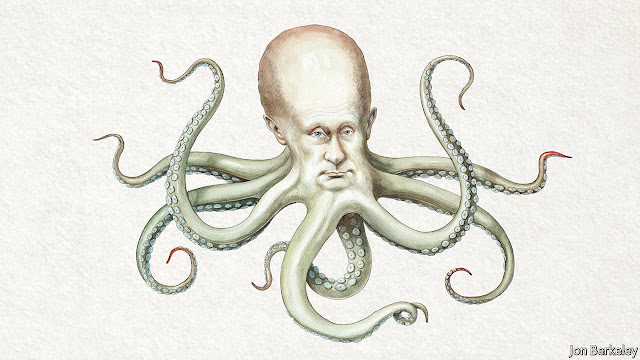 7. Who recruited Neo-Nazis in Ukraine to pull off a Coup? Spencer or Jewish neo-imperialists?

8. Who says Israel can have 200 nukes and receive endless aid from US while Iran is constantly threatened even though it has no nukes and allows inspections? Spencer or Jewish warmongers?

9. Who controls entertainment and pornified mainstream culture to the extent that your average girl in the US is raised to be a mindless slut consumer pig? Spencer or Jewish producers?

11. Who monopolizes media and platforms and uses censorship and repression to control the flow of information because they cannot win a fair debate? Spencer or Jewish tyrants?

12. Who holds AIPAC Nuremberg-like rallies to buy off whore gentile politicians to support Jewish supremacists interests over Palestinian national liberation aspirations in the Jewish-Palestinian conflict? Spencer or Jewish chauvinists? If Jews really are for equality, how come NYT won't hire Palestinian-American columnists? How come Jews insist that the US favor Jews over Palestinians just like Nazis favored 'Aryans' over Slavs?

It seems to me the real nazis of today are Judeo-Nazis. (((Weisman))) is just projecting his supremacist-imperialist-hegemonism on Trump and Spencer and other whites who want to respect the national sovereignty of other nations, serve their own national interest, and find ways for the world to get along on the basis that fences make for good neighbors.
Jews who are in neo-imperialist mode hate this for the same reason Hitler hated borders that prevented him access to other lands that he wanted to control for the sake of German supremacism. The real enemy of all of humanity is Judeo-Nazism.

Anyway, Weissman is to be thanked for letting the cat, or weasel, out of the bag.
He made it so plain as day what it’s all about.

The borders were still blurred. Nationalism and chauvinism were in check. Undocumented immigrants marched in the streets of Washington and Los Angeles demanding rights. The polyglot nation recovered…. The Jew thrived.

Jews are what percentage of the world population? Yet, all the world must be turned upside down with mass invasion(of course Israel gets Passover rights) just to profiteth the Tribe?

Of course, Weisman's formula applies ONLY AS LONG AS Jews can play non-whites against whites in the game of Divide-and-Rule.
But what would happen if indeed ALL whites did go SJW? Then, they would side with POC against Zionism and Jewish privilege. BDS is spreading among SJW whites like wildfire.

So, it's a kind of paradox. In order for Jewish divide-and-rule strategy to work, there must always be 'racist' whites. If whites were to all lose their 'racism' and mix with POC and just become a polyglot people, they could all turn SJW. Then, Jews won't be able to play divide-and-rule among 'racist' whites and non-whites. The polyglot of POC and SJW whites will come after Jews... like the British Labour Party is a mix of Whites-gone-SJW teaming up with Muslims and Africans against Jewish power.

Also, it is the 'racist' whites who are most supportive of Israel as 'western outpost' in the Middle East. It is precisely because white conservatives have been tainted with 'white guilt' that they cling to Israel First to show that they'd been redeemed from 'antisemitism' and 'racism'. It's their get-out-of-white-guilt-jail card to prove that they are no longer 'racist' when, in fact, they still cling to whiteness, even if in an implicit way.

But if white conservatives really did lose their 'racism' and decided to become SJW, they'd no longer need to cling to Israel or profusely flatter Jews for moral credit. They could just hug Diversity to get all the moral cred they need.
Indeed, this is why proggy whites aren't so pro-Israel. As they are pro-POC, they don't need to hug Jews and Israel to be 'redeemed'. Just by screaming BLM or championing 'dreamers', their 'white guilt' gets cleansed.

In contrast, because white conservatives tends to be less charitable to blacks and browns, their 'white guilt' washing station remains Israel First. But if white conservatives were to drop their racial interests and embrace blacks, browns, and POC, then there would no longer be a need for them to worship Israel to ritual-cleansing of 'white guilt' as it would be washed constantly by their support of POC such as Muslims and Palestinians.
at May 02, 2018