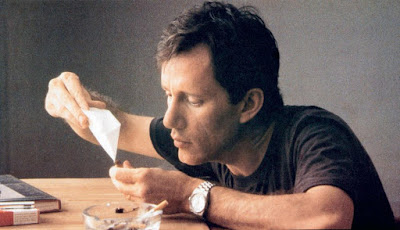 Why do people take certain illegal drugs. They want to get high and feel super. They want to be like insta-gods. Drugs — PCP, cocaine, amphetamines, heroin, meth, etc. — elevate their sense-of-being with euphoria that fills them with delusions of grandeur. Consider James Woods in the movie THE BOOST where his coke-head character feels he can do anything when high on powder. Cocaine boosts his ego with Mood Supremacism. He feels like the greatest player that ever lived. He feels invincible, better than all the rest. Addicted to the sensation, he returns to the drug for the high over and over and over, and eventually he can't do without it.

Our world tends to associate ‘supremacism’ with ‘white racism’, but wanting to feel superior/supreme is a common trait among all peoples. Religions fill people with a sense of spiritual supremacism: "Our god or gods are better than yours", "God is on our side", "I am holier than thou". And the reason why women are so obsessed about cosmetics and celebrity is because they're drawn to the culture of Beauty Supremacism. Women want to look better than other women.
And men are obsessed with sports that are premised on masculine supremacism of the tougher guys lording over weaker guys, making big bucks, and humping ‘hot babes’.

So, despite all this stuff about ‘equality’, our society is obsessed with supremacism of all kinds. And one of the easiest kinds of highs is Moral Supremacism. Thus, Political Correctness or PC is really a kind of drug. Karl Marx called religion the ‘opiate of the masses’. PC is crack for the self-righteous. Certain terms like ‘racism’, ‘antisemitism’, ‘homophobia’, and etc. have a drug-like effect on those who chant them. Though ostensibly used against bigots, chauvinists, and supremacists, the reason for their terminological appeal is the euphoric effect upon snorting, vaping, injecting, or popping doses of self-righteousness.
And this is why PC is dangerous. It really has to be treated as a drug addiction. Anyone who has observed so-called ‘SJW’ types will notice they are not amenable to compromise, understanding, and reason. They just love to repeat the mantras of ‘racism’, ‘antisemitism’, and ‘homophobia’(and sometimes ‘misogyny’, ‘xenophobia’, and ‘Islamophobia’) because another 'hit' of virtue-vanity gives them easy highs.
Trying to communicate with such people is like trying to get through to those intoxicated on moonshine or flying on speed. The smug are more prone to preening self-righteousness, and the easiest way to feel holier-than-thou is by resorting to PC. This addiction isn’t limited to a single group. Even Conservatives are addicted to insta-virtue by preaching that the Democrats are the ‘real racists’. No one wants to discuss complex issues with honesty and reason since they care more about supremacist sensations of easy virtue.
Even cucking is a form of PC drug addiction. Sniffing Cuckaine makes one bunch of whites feel insta-morally-superior to other whites(those who refuse to cuck). Cucks feel as ‘good whites’ attacking ‘bad whites’. It’s near-impossible to get through to them with honest debate since the likes of David French are so full of themselves as ‘good whites’ who say the Magic Words of insta-virtue.

In this sense, media and academia should really be seen as Big Pharma of the mind. They are drug-dealers who push PC as Uppers and Downers to the confused and impressionable who, by abusing terminological substances of PC, get to indulge in self-righteous supremacism as a raging high.
at January 18, 2018