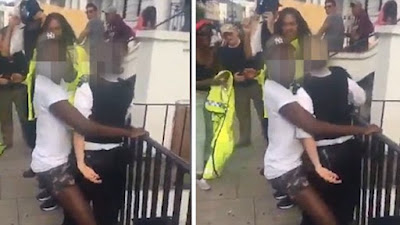 Nations can survive Decadence as all civilizations have cycles of rise and fall. The fall of the old dynasties in Turkey, Iran, and China didn’t end those civilizations as people and culture.
But current Decadence in the West is accompanied with 'Demodence' and 'Demomise', or demise of native populations. There is NO recovery from such disaster. If France becomes Africanized, it is no longer France and will never regain its true identity and heritage. It will forever be neo-savage land of Africans speaking French and colonizing white wombs(infected with jungle fever) to create more black babies who grow up to be ravenous savages. If Australia is repopulated with Hindus, Chinese, Arabs, and Africans, it will no longer be Anglo-Australia, the real Australia.

A nation or community can survive bad(even horrible) ideas or trends. Russia survived communism, even after losing millions of lives. China survived cultural decay, wars, and communism(and other disasters) too. Nevertheless, Russia remained Russian and China remained Chinese throughout the disasters, and they were able to re-emerge on the world stage as sovereign nations.

Globalism is more dangerous than bad ideologies or trends of the past because it uses decadence to weaken the pride and will of a people and then drives a stake through the nation’s weakened heart with demographic invasion and replacement.
To undermine national solidarity based on morality and values, globalism pushes a kind of sacro-decadence that conflates diversionary fun with divine faith. Decadence is no longer something to be tolerated and enjoyed(with guilty pleasure) but the very foundation of New Spirituality. Notice homomania is no longer just street celebrations & colorful parades but the new holy symbols in churches and the new sacred text in schools & libraries. Even the National Church in Washington D.C. hoisted the 'rainbow' flag.

If this madness were just a case of bad ideology or trend, it will blow away in due time. But in the age of globalism where countless peoples are on the move all over the world to invade & plunder wealthier nations, sacro-decadence weakens a people's pride & power to defend their domain and instead strengthens their passion for racial/national suicide as the highest expression of virtue. With debased values, weakened wills, and/or corrupted passions, the native/established peoples increasingly lack the courage and confidence to say NO to the invasion and push back. Worse, their moral vigor, as such may still exist, welcome the invasion and replacement as a spiritual prerogative.

When falsehood is the 'new truth', the most positive & affirmative emotions will honor and serve what is self-destructive while reviling what is most self-protective.

While it would be nice if positive emotions were always on the side of sanity, health, and truth, the problem is emotions always follow the programming of minds & senses. Through indoctrination and iconography, people's minds and senses can be made to affirm the false and insane. And then, their positive emotions flow toward revering those ideas and icons. People have wondered why so many seemingly sane people had positive passions for psychopaths like Stalin, Hitler, Mao, and Obama. Are so many people evil or insane? How could they have felt so positive about figures who were so demented?
It was because emotions follow the programming. It's like the positive affections of a dog can go to serve and love the most demented person. Emotions are blind. If a dog is made to believe that such-and-such person is the rightful master, its affections will flow toward that person. Likewise, if the people are made to believe in the 'greatness' or 'holiness' of a certain figure via manipulation of ideas and icons, their emotions will flow that way.
Emotions are 'innocent', earnest, and childlike. So, positive emotions don't automatically choose what is objectively or morally positive, and negative emotions don't automatically reject what is objectively or morally negative. As with dogs(that can be made to love bad people and hate good people), people can be made to associate their positive emotions to what is negative and their negative emotions to what is positive.

Demented ideology of PC and decadent iconography of Pop Culture have brainwashed so many white minds to revile white identity, interests, security, & survival as ugly and pathological while welcoming non-white invasion, moral degeneration, and homomania as the paragons of virtue and redemption.

So, what Western nations face today isn’t just decadence. It is decadence that leads to defenselessness against massive invasion, leading to'demomise' or demographic demise and 'demodence', the decay of an entire people as identity and culture.

In the UK, the BBC now regularly feature blacks and non-whites as British historical figures in movies and series. These aren't just bad ideas and icons but weapons to facilitate the massive invasion of UK by blacks and other non-whites who will turn Great Britain into European Africa, Pakistan, and Arabia.
at January 25, 2018