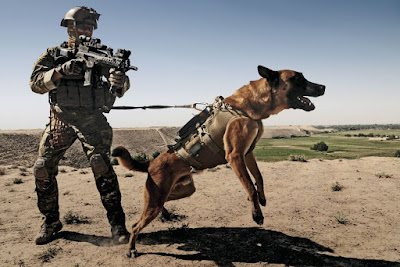 The Military instinct: The Human Race as Feral Dogs

Fred Reed: Recently the collapse of the Soviet Union appeared to offer a prospect of extended peace. There seemed nothing left to fight about, at least on any scale. Yet the United States quickly launched a half dozen wars of no necessity and threatened others. Why?

WHY? Well, which group in the US has (1) elite control over institutions and (2) special animus against Russia, Iran, and any nation that happens to be disliked by Judea and/or Israel?

The answer is simpler. It’s World Jewry or Jewish Globalist power. If Jewish Power had never gained supremacy in America, the US military would not have invaded Iraq, would not be foaming at the mouth at Iran, wouldn’t have engineered a coup in Ukraine, and would not have triggered a ‘new cold war’ with Russia, a nation with an economy on par with Italy!

True, there is a male-warrior instinct, but if US military ventures are primarily motivated by Male Aggression Principle, why isn’t US calling for war with Saudi Arabia or Zimbabwe? Or with Israel? After all, the UN has a long list of human rights violations committed by Israel.
The real issue revolves around the question of "Who gets to choose the targets(as outlets for male warrior aggression)?" ‘Male’ or ‘conservative’ aggression is satisfied with hunting and destroying ANY enemy, therefore real power rests in those who get to choose the target for destruction. It's like chefs will cook anything: fish, fowl, meat, or vegetables. It all depends on who's holding the menu and making the order. The US military is a kitchen of destruction. It waits for orders from those who are looking at the menu. And it's the Jews who got the menus.

It’s like dogs will happily hunt any animal. The real question concerns who gets to decide what is to be hunted? Should the hunt be for rabbits, foxes, wild boars, deer? Dogs don’t decide. They obey the master. In America, those who get to choose the prey for the predatory military are ethno-tribal in nature. They are Jews.

Fred Reed: Dogs form packs, mark territory, and bark furiously at strange dogs. So, it seems, do people. An empire is just the result of these canine instincts.

But dogs lack agency. They look to their master for orders and approval. So, even though dogs naturally love to fight, hunt game, or just growl at other animals, they rely on the master to decide what should be hated, hunted, fought, or growled at, as well as what to be gentle with, showered with affection, protected, and/or loved. A dog can love or hate another animal or particular person... depending on the wishes of the master.

Yes, the US military is like a dog, and it lacks agency. It follows orders. And its masters are in organizations like AIPAC. John McCain the militarist only hates nations and peoples hated by Jews. John McCain is McCanine. If Judea told him to be nice to Putin and treat Russia as a friendly nation, he will change his tune overnight. People like McCain not only crave an enemy to hate but a master to serve. As World Jewry are the current master of the West, dogs like McCain do their bidding.

Or consider the Wehrmacht. Sure, there were German generals and soldiers who relished a good battle and the blood-and-guts ‘heroism’ associated with war. But their animus or amity depended on the Fuhrer. When Adolf Hitler told them that USSR is an ally, they were happy to shake hands with Soviet troops. When Hitler ordered them to attack Russia, they did so at the drop of a hat and killed millions.

Actually, conservatives have more sympathy for people within the group, community, or tribe. Liberals feel less kinship sympathy for their own kind. Also, ‘empathy’ isn’t necessarily sympathy. It means the ability to read other people’s thoughts and feelings. The reason why some conservatives lack sympathy for certain other groups is precisely because they are empathetic in reading their minds. For instance, a keen conservative can read the mind of a Negro and see through the BS about ‘social justice’. They look into the Negro male mind and hear, “Where da white women at?” and read the Negro female mind and hear, “My booty be da center of everything.” And keen conservatives are empathetic in reading the minds of Jewish Neocons and their dirty tricks.

Liberals may appear ‘empathetic’ because they claim to be more open-minded about OTHER peoples, but this has less to do with genuine empathetic understanding of others than a naive conceit in their trust or superficial interest in the Other. Most Libby-dibbers who open their hearts and borders to Muslims have NO IDEA what Muslims are really after. Most Libby-dibbers who get all mushy about homos have no idea how the homo mind really works. Homos are vain, narcissistic, self-centered, and bitchy. But libby-dibbers see them as the New Saints who materialized out of ‘rainbows’. True empathy requires the keenness of mind to read the hearts of others. It’s like what Michael Corleone says in THE GODFATHER PART 2. He tries to see things as others see things.

Now, it’s true that many Conservatives are mere morons into ‘Muh country, muh God and muh guns, and etc’. But then, so many libby-dibs are into ‘Muh self-righteous vanity, muh Diversity and muh Inclusion, and etc’. They are enthralled with silly slogans and pat chants.

True, but the imperialist mindset can be construed as libby-dib. Most conzo-wonzos are content with what they got, what they are familiar with. It’s the libby-dibs who want more and get tired with what they already have. This leads to an imperialist mindset. (The ultra-conservative systems of Byzantine and East Asia were not interested in conquering or converting the entire world.) Also, libby-dibs believe they are intellectually and culturally superior, and such attitude leads them to believe that they have the moral right to remake the entire world in their image and ideal.

So, the US empire is a fusion of doglike conzo-wonzo soldiers and birdlike libby-dibby imperialists. After all, isn’t it odd that the US is now an empire that sends its soldiers to invade and transform other nations to… raise the Homo Flag?

So, aggression principle has both a conzo-wonzo aspect and a libby-dibby aspect.

Conzo warrior mentality is more defensive and preservative. Pre-Modern East Asia was very conservative, and its military was all about defending the realm from foreigners. This changed only in the 19th century as the the libby-dib West forced Asia to open up to world trade... or get blown to smithereens. (The two times Japan went into imperialist mode owed to Western influence. Hideoyoshi got guns and backing from the West. And modern Japan modeled itself on European and American empires.) Akira Kurosawa’s KAGEMUSHA is about the wisdom of cautionary conservatism in war. Be like a mountain and preserve the domain. Don’t risk losing the domain with vain ambition. But the reckless son wants to win it all and gambles everything, even losing the domain. (Ironically, the ‘far-rightist’ Hitler was more of a libby-dib warrior in ambition, and ‘far-leftist’ Stalin was more of a conzo-wonzo warrior in caution.)

Libby holy crusader mentality is more offensive and transformative. The West became the most progressive part of the world and waged offensives to conquer and transform all the world with Christianity, free trade, ‘human rights’, and etc.

Now, there is good and bad side to both conzo mentality and libby mentality.

Conzos are less aggressive outwardly and therefore less likely to conquer other peoples. But this ultra-defensive posture can lead to isolationism, stagnation, and fear of new ideas that might bring forth progress. This is why the Ottoman Empire and East Asia fell behind the more dynamic and liberal West.

As for Libbies, they are more aggressive, adventurous, and ambitious. So, unlike the conzo Hindusphere and East Asia, the more libby Western Europe discovered the world and created new trade routes and made advances in every field. But it also meant conquest, imperialism, slave trade on massive scale, genocide, and etc. And today, the cult of Tolerance among Western libbies is leading to mass invasion by the Third World that could very well mean the end of Western Civilization.

Ideal is a kind of balance of conzo and libby tendencies. But in the US, both the conzo and libby tendencies of gentiles are harnessed to serve the ethno-ambition of Jewish globalists who manipulate and command gung-ho US conservative soldiers to invade and destroy nations(hated by Israel) and also to ensure the spread of Homomania and Hollywood values. Instead of a meaningful balance of conzo-ness and libby-ness, both are perverted to serve ethno-supremacist ambitions and homo-negro degeneracy.

Now, the US could play a responsible role as the policeman of the world. After all, there’s always the chance of dogs around the world getting out of control and barking and attacking one another. If a responsible person were to wield the stick and command the field, the dogs would know who’s boss and learn to behave. US could play this role if it were ruled by sane and sensible leaders.

But instead, the US is like a demented master that trains and encourages some dogs to attack other dogs. Indeed, American Power is now like Jews-as-masters abusing and exploiting goy Americans as bulldogs. US has become the master of New World Disaster. It used Jihadis to tear Libya and Syria apart. It encourages Saudis to raise tension levels with Iran. It used neo-nazi elements in Ukraine. It provokes North Korea with military drills with servile South Korea, a yellow dog that takes orders from American dogs who take orders from the Jewish Master.
Even US allies come under US bullying. So, even if a nice nation like Hungary wants to be friendly with the US, Russia, and Iran, the big US bully steps forth and says YOU CAN’T TRADE WITH THEM BECAUSE WE SAY NO(AND WE SAY NO BECAUSE JEWS SAY NO); IF YOU DISOBEY, WE WILL DESTROY YOU THROUGH SANCTIONS AND INTERFERENCE VIA CIA.
It’s how the current world is.