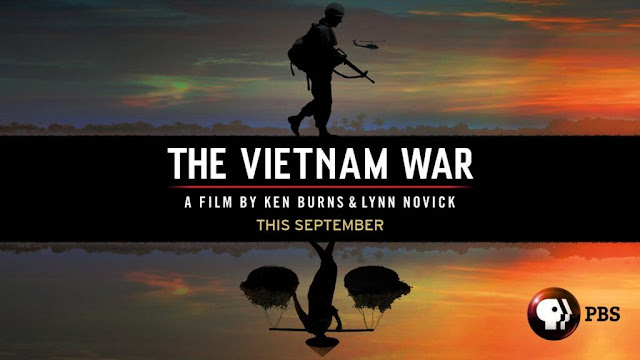 I don’t think Ken Burns is entirely wrong in empathizing with those who were involved in the conflict. Sure, there were warmongers, profiteers, and egomaniacs. And paranoids.

But Dwight Eisenhower, John F. Kennedy, Lyndon Johnson, and Richard Nixon were not particularly sadistic or cruel men. Now, Eisenhower could be aloof or angry. Kennedy could be vain. Johnson was plenty corrupt. Nixon could be nasty. But they were not psychos or radicals like Lenin, Stalin, Hitler, or Mao.

As for the military brass, well, what would one expect? They were educated, trained, and prepared all their lives to think of the world in terms of team sports. They were trained to fight and win, not to think of higher matters or deeper truths. Sure, West Point and Annapolis educated bright students who learned history and ideas, but it all came down to one thing: Fighting and Winning. As for the CIA, it is a sinister organization by design — an agency of necessary evil — , but then, let’s keep in mind that Soviets had a worthy counterpart in the KGB. Let’s remember Soviets infiltrated FDR’s government and stole a lot of secrets and planted a lot of subversives. Soviets even got the Bomb during the Truman era. Also, Soviets ruthlessly suppressed and persecuted dissent in their own empire. And EVERY nation has its own version of the CIA. If CIA did more damage, it was because powerful nations just have more means to do so.

Now, would the US have intervened in Vietnam if it was on the verge of being united under a non-communist nationalist? Probably not. After all, the US didn’t intervene in Indonesia when it gained independence under Sukarno. The only reason US got involved in Vietnam was because Ho was a Soviet-leaning communist. And even though Domino Theory is thought to have been ‘debunked’, it certainly made sense at the time. Even Soviets believed it. So did Mao, which is why China, though poor and backward, sent aid to rebel groups all over the world. Soviets believed that a sign of US weakness could spark revolutions all over the Third World that equated capitalism with imperialism. Che Guevara certainly believed in the Domino Theory. Communist victory over Cuba, he thought, would start a wildfire of anti-Yanqui revolutions all over Latin America and then eventually spread to the US as well. Che really believed this, which is why he spent some time in the Congo and later died in a failed insurgency in Bolivia.

Also, at least in part, the Domino Theory did come true. Not so much in Southeast Asia, though Laos and Cambodia also fell to communism. And keep in mind Indonesia could have become communist if the Peking-backed coup had succeeded. And keep in mind that the communist victory in Malaysia was prevented only by ruthless British strategy of hurling huge numbers of people into concentration camps and hamlets.
At any rate, communism did continue to spread after the fall of Vietnam. US power seemed to be on the wane, not least because of social conflicts and cultural decay that defined much of the 60s and early 70s. Americans threw in the towel after losing ‘only’ 58,000 men. The outside world got the impression that Americans no longer had the resolve to impose their hegemony on the world. If a ragtag army in Cuba could defy Uncle Sam in the early 60s and if guerrilla troops in Vietnam could defeat the greatest technological power, maybe America lost its warrior soul as the result of excessive freedom, pleasure, and individualism. It seemed like dejavu of Pax Romana's decline, what with a populace that was no longer respectful of authority and no longer willing to make sacrifices.

Not only communists were emboldened by American troubles(and ultimate 'defeat') in Vietnam. Vietnam became a metaphor for anti-Americanism all over the world. May 68 movement that almost brought down the French government was inspired in part by Vietnam(though it ignited as a silly scuffle about dorms and sex). Vietnam was bigger than Algeria because US was a World Power. French troubles in Algeria weren't all that surprising as France was an empire in decline. French defeat was a setback for a European power, not a World Power.

So, after the US abandoned South Vietnam, there was a sense that David could beat Goliath anywhere in the world. The Shah regime in Iran fell, and Islamists came to power. Afghanistan turned communist, and Soviets felt emboldened to roll in the tanks. Ethiopia, Mozambique, and Angola turned communist. Communists won in Nicaragua and almost won in El Salvador and Guatemala. There was a raging Maoist insurgency in Peru. Salvador Allende came to power through elections, and he was pro-Soviet and pro-Cuba. He was removed only by CIA-backed coup that did as much harm as good. It certainly blackened US reputation around the world. So, in a way, the Domino Theory wasn’t all wrong. Vietnam did signal a sea-change in world politics… at least in perception. Ironically, the Vietnam example inspired the US and the Mujahadeen to pull off something similar in Afghanistan against the Soviet Empire.

In the end, communism wasn’t defeated by the US. It defeated itself. Soviet economics just couldn’t sustain the empire. Its subsidies to Cuba were costly. Its support of Marxist regimes in Africa was a constant drain, like flushing money down a toilet. USSR had to prop up Iron Curtain nations economically. As Eastern European nations were limited in natural resources, their economies had to rely on manufacturing, which meant Soviet industry had to be suppressed. And Vietnamese communism was a disaster in economic terms. Maoism was hell on earth.
Some might argue communism failed because Capitalist West froze the communists out of world trade. But considering that the communist world encompassed resource-rich Soviet Empire, people-rich China, and lots of neutral nations willing to do business with communist nations — India and Arab nations had good relations with Soviets — , the real reason for the failure of communism was it just doesn’t work.

And when we look at the aftermath of communist victory in Indochina — brutal repression in Vietnam and Laos and psychotic democide in Cambodia — and when we consider how even communist nations like China and Vietnam eventually made the switch to market economics, it’s clear that US was on the right side of history at least on basic economic theory.

Also, the Vietnam conflict was complicated because both sides were aggressors. US was the aggressor in working with the French to divide Vietnam in half, occupying the southern half, dropping bombs, and using Viet women as whores. But the communists were also aggressors because they sought to impose Stalinism on the entire nation when, in fact, many people didn’t want it. After all, more people fled the north to the south than vice versa. Why? Because there’s something prison-like about communism. The commissars never leave you alone, and there are so many things you aren’t allowed to do. It’s a system where you can’t do so many things and are told to do lots of things that make little sense.

Also, North Vietnamese leaders, though inspired and patriotic, were ruthless in their own way, willing to sacrifice any number of people for victory… just like Japanese militarists were willing to Go All the Way in the Pacific War instead of calling it quits to save lives. Also, many atrocities were carried out by the communists as well. The massacre in Hue, for instance. In war, all sides do horrible things.

Still, in retrospect, Ho Chi Minh was a genuine patriot, a legendary figure much beloved by many Viets. And for that reason, US shouldn’t have intervened in the first place, and the whole mess could have been avoided. There is no getting around the fact that Ho Chi Minh was a genuine patriot who devoted his life to gaining independence for his people. Even though communism was an unfortunate choice, his formative years were defined by a world in which the great empires were capitalist while the Soviet Union lent a hand, symbolic or material, to Third World peoples yearning to gain independence.

CucKen Burns makes my skin crawl, but at his best, he can look at both sides of the issue instead of going for a b/w version of history with good guys vs bad guys.

That said, perhaps his rather sympathetic take on Cold Warriors reflects the neo-hegemonic worldview of globalism. As Proglobalists now control the US, the neo-Pax-Americana is about the dissemination of agendas favored by people like CucKen Burns: Homomania, Afromania, feminism, Diversity, and EOJ(or Empire of Judea). Today’s progs want the world to become neo-Americanized because America itself has been remade into a giant globo-experiment. We now live in a Metropolar World.
Indeed, in today’s Vietnam, as journalist Linh Dinh had duly noted, there is now homo parades and Afromania and Vietcuckery. So, considering that Viet communists had fought for patriotism and national sovereignty, it could be that the new Western ‘progressives’ now almost feel as though the US was on the right side of history all along.

After all, where was CucKen Burns when Obama and Hillary were destroying Libya, Ukraine, Syria, and etc. Where were he and his ilk when Jews were cooking up New Cold War with Russia with hysteria that would make Joe McCarthy blush? They all seem to have learned to love the empire. Their ilk are now in the commanding heights of all institutions and industries. So, US imperialism now means the spread of more proggery all over the world.