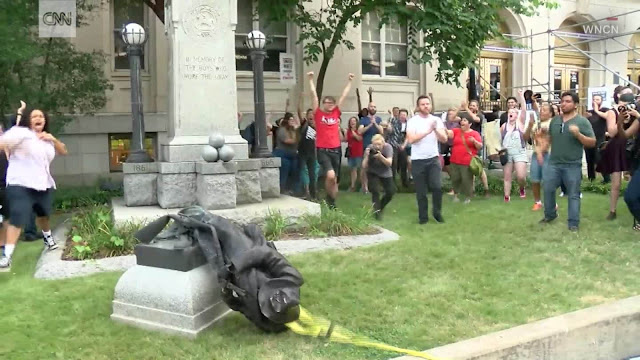 Some say Confederate and other White Monuments are being removed or desecrated across America because of demographic changes: As the US becomes less white, white monuments are targeted by non-whites. To an extent, maybe.

But consider the following examples that call into question the correlation between demographic change and iconoclasm.

Also, consider the Anglo-American remembrance of Indian Cultures. American Indians were killed off by disease or guns and pushed westward, finally into dreary Reservations. And yet, Anglo-Americans went about building monuments to these vanquished peoples when the dust settled. These were memorials to Indians erected by white folks who replaced them. So, even as demography favored white settlers over Indian savages, white folks honored the memory of Indians by erecting monuments, naming towns after Indians, and etc.

So, it’s not just about demographics but a state of mind that determines whether cultural markers are erected, preserved, or desecrated.

Anglo-Americans could be ruthless warriors, but they also had a culture of magnanimity, recognition and respect for worthy foes. David Yeagley expounded on this aspect of the White Man. It is possibly rooted in the honor code of the warrior and the Christian virtues of grace and forgiveness(or repentance).

But such mindset seems to be missing among most non-white groups. Too many Jews feel contempt for gentile cultures and want them utterly defiled and desecrated. Blacks only respect ugabuga gangsta thuggery of ‘muh power’ and have no regard for values and culture beyond ‘muh dic*’, ‘muh booty’, ‘muh bling’, and ‘muh badassness’. Muslims can be simple-minded iconoclasts(even though, to their credit, they didn’t destroy all the pagan and infidel heritage in arts and achievements… that is, until the US let loose the hounds of ISIS on secular Arab regimes). And Asians are yellow dog teachers pets who can easily be led into Red Guard mode.

As for whites... they are now deracinated cucks. The lack of fiery resistance on the part of whites(even in the Deep South) to the toppling of Southern Monuments is downright shocking. Such craven cowardice or, worse, total apathy and indifference to the eradication of their own heritage and remembrance of past heroism and tragedy is pathetic indeed.
But then, the globalized ‘muh burger and fries’ culture of the new US has severed the historical and ancestral roots of most Americans. Non-white mass invaders attack whiteness, but they too are severed from their own identities, roots, and heritages. Both whites and non-whites are merging into vapid deracination where most people mainly identify with pop culture. Their only culture is videogames and Negro-dominated sports and rap music.
Granted, most non-whites don't come to America with hatred for whites. That hatred is implanted by Jewish media and academia that saturate entertainment and education with images of Evil Whitey as scapegoat for all problems though, to be sure, non-whites can be villains too as long as they are not Jews, blacks, or homos.

The main anti-white animus is the product of Jewish control of media. In that sense, the main reason for the recent spate of anti-white desecrations are neither primarily demographic or ideological. After all, most blacks in the South didn’t much care about Confederate flags or monuments until recently. The symbols and monuments became an issue with increasing Jewish and ‘neo-carpet-beggar’ takeover of the South. It has accompanied the rise of ‘new conservatives’ such as Nikki Haley who take their cues from Jews. Also, the new Southern White elites are either financial stooges of Jews or were educated in Jewish-dominated elite schools. As such, they lack the soul and spine to call out on the Culture War against the South that is being Afro-ized and ‘Immigrantized’.

A place can change demographically but still let the monuments be. Or if a radical ideology takes hold, it seeks to wipe out everything that is deemed falsely idolatrous. The current Culture War we are seeing in the US isn’t primarily due to demographic or ideological factors. Most Mass Invaders(aka non-white immigrants) who come to the US don’t come with anti-white hatred, nor do they have any wish to knock down statues. Rather, their kids are taught to hate whites and white symbols in schools. They are taught by teachers whose worldview has been shaped by trickle-down anti-white hatred of Jewish elites.

Also, we know the core animating factor isn’t ideological because the targets are usually limited to whatever Jews don’t like. After all, if the New Values are about ‘anti-racism’, why are Emma Lazarus and Immigration celebrated when More Immigration meant more 'racist' ‘genocide’ against American Indians? Also, why don’t Jews fess up to the fact that their immigration patterns have always been White Preferist or White Favorist? In other words, even as Jews bitch about ‘genocide’ and ‘slavery’, they always trailed and followed whites who led the way in creating new civilizations and opportunities, at times even through genocide and slavery. But notice that Jews get ‘passover’ treatment from the ideological fervor despite the fact that Jews played a prominent role in financing Western expansion, slave trade, and imperialism.
True ideology doesn’t work that way as it calls for consistency. Under Bolshevik communism, both Christianity and Judaism were suppressed. And in ideological Red China, even Chinese ‘reactionaries’ came under attack. No one was spared because he was a fellow Chinese.

In contrast, the Culture War in the US always exempts Jews-as-targets. So, even though 'racist' Apartheid South Africa was targeted for sanctions, Israel was allowed to do as it pleases despite its greater violence against Arabs and development of nuclear weapons(which it even shared with Apartheid South Africa). Even though Joe McCarthy was reviled by Jews for violation of Constitutional Rights, Jews play loose with the law to shut down and effectively censor anyone they don’t like, e.g. Alt Right at Charlottesville and on the internet.
And even as so many Confederate monuments have been removed or destroyed, the ones of Benjamin Judah remain untouched because they are of a Jewish man. So, even though demographic changes and ideological fervor play a part in the desecration of white history, they are not the main impetus behind the violence.
It is Jewish tribal manipulation of hatred in order to administer lashings on white identity and consciousness so that white pride and prestige will be broken to the point where whites feel they have choice but to just surrender to the supremacist will of Jews. To be sure, the most effective way of breaking white will and unity(most crucially of white men and white women) is Jungle Fever and ACOWW(or Afro-Colonization of White Wombs), but it also helps to smash Southern symbols of White Resistance against the Biological Slavery under Blacks. After all, even though whites did force blacks into social slavery and used racial discrimination, the Confederacy and Jim Crow were also acts of white resistance against the Thug-Advantage of stronger, tougher, and more aggressive blacks. In other words, black-and-white relations were never simply black-and-white but held many grey areas.