To Combat Globalism, Whites in the West Must Restore their Own Nationalism, Not Attack Chinese(and Russian) Nationalism — Globalism Is Essentially a Jewish Creation and Tool, and Jews Suppress White Identity Necessary for White National Liberation in the West 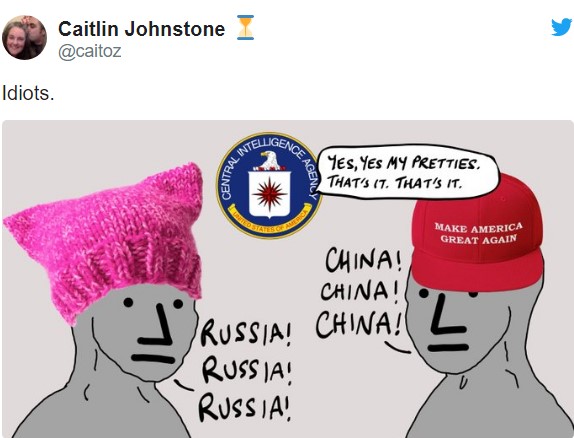 Using the Covid-29 crisis to push nationalism against globalism is good and sound.

Oddly enough however, so-called nationalists in the West are attacking Chinese Nationalism. But if Chinese being nationalist is wrong, it then follows that nationalism itself is wrong. And that means West shouldn't be nationalist like China(and Russia)... which is self-defeating to nationalists.

China used globalism for nationalist purposes. It believes in China First.
And Western nations should use the World Order for their own national interests.
But when people in the West attack Chinese nationalism, they are attacking nationalism itself. It's like Tucker Carlson denouncing China for being 'ethno-nationalist'. Funny coming from someone who opposes immigration on grounds that all of US will turn into California. (But his confused or hypocritical self is full of praise for Zionist ethno-imperialism.)

Russia has shown that a nation can be nationalist and work with China. China has never been opposed to other nations being nationalist. China and Russia get along despite tensions(historical and geopolitical) because both understand and respect each other: Russia uses the alliance for Russian interests, China uses the alliance for Chinese interests. Russia is okay with Chinese nationalism, China is okay with Russian nationalism... as long as neither goes imperialist on the other.

The problem isn't Chinese nationalism or even Chinese globalism. Pakistan and Iran are far less rich and powerful than the US, but they maintain their sovereignty vis-a-vis China. They trade and cooperate on certain interests without surrendering their power to China. Even impoverished North Korea(with 1/40th of the economy of South Korea) has managed to do its own thing in defiance of China.

But we are to believe that the rich and mighty West has been helpless to stop Chinese power and influence? ROTFL. True, Chinese business interests have moved aggressively into Canada and Australia, but whose fault is that? Anglos turned into a bunch of worthless cucks who measure everything in terms of money and 'woke' virtue-signaling about 'muh diversity'.
What did Sun Tzu say in the Art of War? Power is like water. It generally runs into open spaces. So, when Anglo nations went cucky-wuck and opened themselves to Chinese people and money, guess where a lot of people and money went? China didn't forcibly invade the West(like the West once did against China). Rather, Canada and Australia freely opened themselves up to Chinese people and money(as well as to Hindus, Arabs, and even thuggish Sudanese blacks).

But why did Anglos go from proudly race-ist and nationalist — Canada and Australia used to have WHITE ONLY immigration policies — to globalist, 'anti-racist', cucky-wuck, and pro-diversity? Why did Anglos allow Africans and Muslims to take over entire parts of London? Because Mao sent his Red Guard hordes to conquer them? Because Jackie China and Bruce Lee's ghost led an army of kung fu warriors to invade the West? No, because Anglos let Jews take over the West, and Jew filled white minds with 'white guilt', jungle fever, self-loathing, diversity-mania, and 'muh restaurant' lunacy.

Jews made Anglos cuck to the Other(the Primary Other being Jews of course). Once Anglos got into the habit of cucking to Jews, it was only a matter of time before other groups followed the Jewish Lead: Chinese, Hindus, Arab Sheiks, illegals from Latin America, the African invasion, etc. They all learned to chant 'diversity' and 'racism' to gain increased entry into the rich and clean West. And as white minds were colonized by Jewish PC, whites just nodded along. Keep in mind that until Donald Trump came along, 'nationalism' was a dirty word among nearly all Western elites, intellectuals, journalists, and managerial class.

But US, Canada, UK, and Australia are without Anglo sovereignty. Anglos(like Derbyshire himself) are sorry cucks to Jewish Globalists. If Anglos had sense, they wouldn't opt for anti-Sinicism. Rather, they would argue that white nations must be like China, Russia, and Iran in regaining national sovereignty and operating on the basis of national interest. This can be done without anti-Chinese rhetoric as Russia proved. Initially, China respected Trump as a tough-talking nationalist. Chinese nationalism can work with other nationalisms. Alas, Trump turned into just a cuck to Jews who talks nationalism but engages in continued US globo-homo hegemonism and imperialism. (Also, as Deep State operatives are addicted to the hyper-power game of globalist-imperialism, they despise nationalism as 'small potatoes'. For them, the only game that matters is the globalist contest of world domination. So, instead of envisioning a future where American Nationalism and Chinese Nationalism co-exist peacefully, they can only think in terms of American globalist supremacism vs Chinese globalist supremacism. They project their own supremacism onto others. It's like Jews project all their pathology onto Russia. The difference is China wants to trade with the world but has no interest in spreading 'Chinese values' or 'Chinese ideology', whereas American missionary impulse, Anglo imperial-adventurism, and Jewish supremacism are addicted to transforming the entire world.) 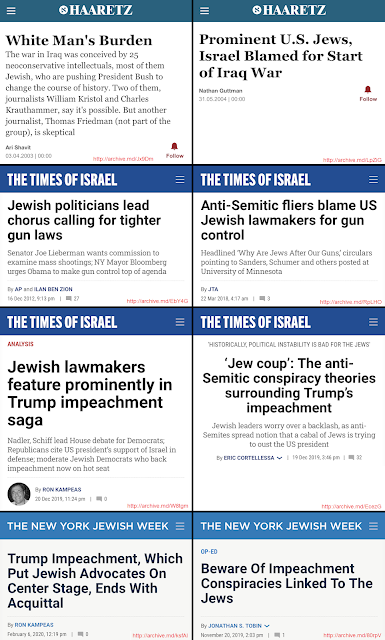 It's weird how Anglo nations are many times richer than Russia(that is strong in military but weak in economy) but politically many times weaker. The West is like one big Hong Kong under British Rule: Rich but a puppet of the Brits. Today, Anglo nations are rich but political and ideological colonies of Jews. When China deals with Russia, it is with a second-rate economic power but a first-rate political power. When China deals with the West, it is with a first-rate economic power but a third-rate political power. Just look at Justin Trudeau or the female leader of New Zealand. Even tough-talking Trump regularly takes it up the ass from Jews and acted as their hitman in the murder of hero Soleimani, the Iranian patriot who's been battling terrorists in Syria. All such Western goy politicians are mere tools and puppets of Jews. But Jews are so powerful that they can hide their power, and goy-cucks play along with the hope that, if they suck up to Jews just one more time, Jews will be nice to them. So, white 'liberals' blame Russia for everything, and white 'conservatives' blame China for everything. Jewish Power manipulates and corrupts US politics, but we had three long years of Russia Collusion nonsense. Jews control US institutions, but we now get 'China Inc or Chinc. controls everything'. It's downright hysterical.

There was a time when the West was both a first-rate political and first-rate economic power. White Christian elites ruled, and they were united as one people with white Christian masses. But over time, Jews took over, and white elites became managerial cucks serving the Jewish globo-homo agenda. And white masses were to be replaced by White Nakba, race-mixed with jungle fever & bamboo fever, and/or killed off with opioids(sold by Jews who once sold opium to the Chinese). Then, the cure is obvious: White Liberation from Jewish supremacism. Unity of white elites and white masses. Nationalism like in Hungary. But we hear NONE of this from the likes of Tucker Carlson. All we get is blaming China for globalism that is really the tool of Jews. The truth is China is prepared to deal with nationalist white nations. Rise of nationalism in White Nations may be disadvantageous to China in certain areas, but Chinese are not ones to tell white nations what to do. (The 'woke' anti-white Chinese in the West are the products of Western PC media and academia controlled by Jews. Chinese in China tend to despise the 'white left'.) They will adapt to the new reality. The one group that is most hostile to revival of nationalism in white nations is the Jews. This is why Jews are now urging whites not to restore nationalism in white nations but to attack Chinese nationalism as the source of globalism's problems. By blaming Chinese NATIONALISM, snuff nationalism in the West as well. 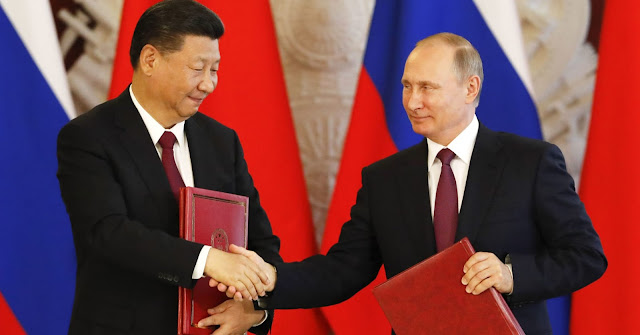 The problem is Anglos are doing NOTHING about the source of US enslavement to globalism: Jewish Power. If anything, they are pretending China is the master of globalism and forced globalism on the West. This is total nonsense. Jews pushed globalism on the West. Jews urged big business in the West to dump on their own workers and send factories to Mexico & China and outsource to India. Jews in Silicon Valley invited all those Hindus. Jewish New York Times hires Hindu and Chinese 'woke' scholars to dump on whites. China didn't create this World Order but merely took part in it. Also, despite all the corruption and brutality of current China, it did make real products and shipped them to other nations, which did a helluva lot more for the world than Jews in Wall Street making trillions via financial manipulation.

If Anglos followed the Putinist model, they could bring back white pride and white-majority nationalism in the West. And then, they could deal with China on the basis of mutual respect. If China currently doesn't respect whites, it's because whites cuck to Jews. Chinese know Jews rule the West. And as whites are cucks of Jews, whites adopted Open Borders and can't say NO to mass immigration-invasion. So, if whites want pride and power back, they must come to terms with Jewish Power. But whites are so in awe of Jews(and so frightened of them) that they are in Alex Jones mode: Jones was deplatformed by Jews but blames the 'Chicoms' for his woes, perhaps in the hope that if he grovels before Jews by blaming everything on China, his accounts will be restored in Jewish-monopolistic platforms.

Whites must blame Jews for globalism. Whites must restore nationalism and white identity by pushing back against Jewish Power. But people like Tucker Carlson and John Derbyshire suck up to Jews... even though Jews hate them most. (It's like Jared Taylor has been denied Twitter and Paypal by Jews, but the fool censors anyone who speaks truth to Jewish Power at American Renaissance.) Jews even fund Antifa that went to Carlson's house and threatened his family. Derbyshire has been de-personed in journalism because Jews smeared him as 'white supremacist'. 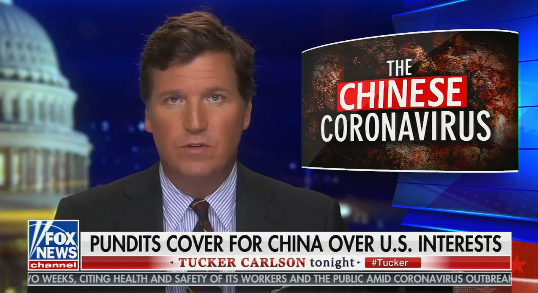 Also, if the West is to pursue nationalism, it must give up on imperialism. It is downright hypocritical for the West to bitch about China(and Russia) when the US and NATO invaded and destroyed nations in Middle East and North Africa in Wars for Israel. It is Trump, tool of Jews, who is interfering in Venezuela. Also, how many Chinese naval bases surround the US? How many US military bases surround China? Who created the mess in Ukraine by instigating a coup?

Wittingly or not, John Derbyshire is merely a shill of Jewish globalists who are trying to blame China for the World Order that Jews have created. If nations like US, Canada, and Australia were to go nationalist and ban further Chinese immigration and investment, China will accept the policies and learn to live with them. It is Jews who will go crazy and denounce white nations as 'racist', 'xenophobic', and 'nazi' at the slightest whiff of white majority interests. It's the Jews and castrated white cucks who insist that even the sentiment "It's Okay to be White" is 'racist'. Has China or Russia denounced Viktor Orban and Hungary? No, all the hatred comes from Jews, and those Jews are well-served by Anglo-cucks who now bark like dogs at the feet of their Jewish masters. 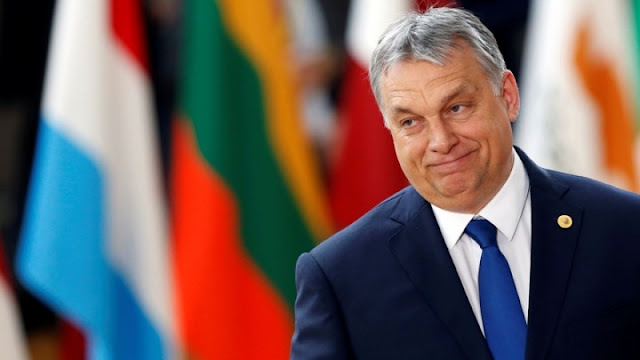