Some Notes on the Current Situation following the DEEP STATE DEMOLITION Celebration of January 6, 2021 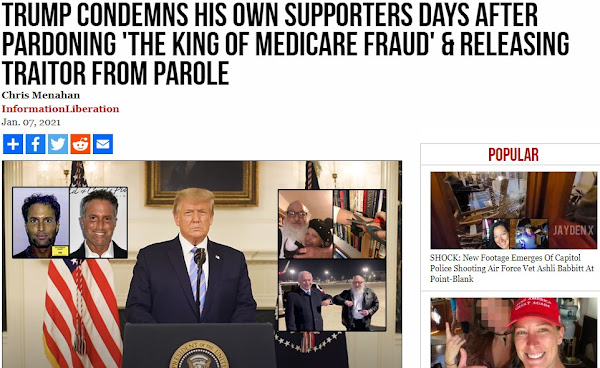 One thing for sure:
America will become less divided if Americans unite to oppose Jewish Power.

Jewish Power depends on the strategy of divide-and-rule among the goyim, therefore the more the goyim are united in their support of Jewish Power, the more Jews will use their power to create more divisions among the goy populace.

1. Jews produce far more lawyers than any other group but are most invested in unlawfulness. But then, if, as judges and lawyers, they rewrite the laws, what was once criminal no longer is. And if that doesn’t work, they can use money power to bribe politicians to pardon Jewish crooks or, better yet, just look the other way at all the dirty Jewish schemes. Look at the list of people pardoned by Bill Clinton, Barack Obama, Georg W. Bush, and Donald Trump. The expertise of law, especially under Jewish Power, doesn't exist to serve the law but to shape to Jewish Supremacist ends. By lawyerly tricks, Jews found ways to circumvent the laws. But as judges, top lawyers, politicians, and big donors, they've changed the laws so that the only working constitution is "USA exists to serve Jews and Israel."

2. BLM and Antifa riot and loot and burn down entire cities. They even attacked the White House and set Washington DC on fire. And yet, they were showered with billions by corporations. The Power made sure that Antifa thugs were released back into the streets, and BLM liars(of ‘systemic racism’) were elevated to the ranks of Great Thinkers and Sages.
In contrast, corporations say they will now shut off funds to the GOP because a handful of Republicans questioned election fraud. And Simon & Schuster canceled the contract for Josh Hawley’s book because he didn't get on with the Narrative. Reality being thus, how retarded that so many conservatives still bleat about ‘socialists’ and ‘communists’ when, in fact, super-capitalists treat them this way?

3. The uprising at the Capitol Building was the mutiny by nationalism against imperialism. Congress is no longer a national entity and doesn’t represent the American People. It serves the Globo-Homo Empire of the Jews. Of course, so many 'liberal' Americans are brainwashed and see the Democrats as the ‘good guys’, just like so many 'conservative' Americans still think the GOP has their back.

In truth, both parties repressive than representative of their voter base. Democrats serve the Jewish cabal, and GOP does the same. Most of the mutiniers at the Capitol may not have known it consciously, but theirs was a nationalist attack on imperialism, which is what American politics has become: The game of Invade/Invite whereby the US military and financial power invade and penetrate the world while peoples from all over are 'welcomed' to flood into the US as new peons. It was a case of patriots attacking the capital of Israel on American Soil.

4. What’s wrong with ‘insurrection’ against the government of infiltration and usurpation? The US government has been thoroughly infiltrated and usurped by forces of Jewish Supremacism. When US politicians are a bunch of treasonous servants of Globo-Homo-Schlomo imperialism, why should Americans show them any respect and loyalty? Traitors(serving globalist Jews than their own nation) demanding loyalty from the people is a real laugh. And they demand rule of law when they encouraged mass riots all throughout the summer?

5. There is power in unity. When BLM and Antifa mobs were burning down DC and smashing cities all across the US and attacking the police and tearing down monuments, ALL Democrats were united, from NY elites to DC power-brokers to big city mayors to lowlife on the street. Even as their cities were ransacked by Antifa and BLM thugs, blue city mayors stuck with the Narrative of ‘peaceful protesters marching against systemic racism’. And the Jew-run media stuck with this too. As crazy as it was, there was power in their unity.
But when a far smaller-scaled chaos ensued in Washington for an hour or two, the only kind of unity among Republican and official ‘conservative’ voices to 'condemn the violence'. They didn’t unite with the rightfully angry American patriots or with Donald Trump but with the enemies of the white race.
What does that tell you? When the Democratic side does violence, there is unity from top to bottom. When there is far milder violence by American Patriots, the GOP elites and ‘respectable’ conservatives condemn the violence as most un-American. And even Donald Trump gets cold feet and tells his people to ‘go home’.

6. The patriots should stop looking to DC for leadership and representation. No sense wasting time and energy on attacking the empire of the enemy. They should build a new capitol, a separate capitol, to initiate the creation of bi-nationalism as the new mode of American politics. Let Libbies and Progs have their own government and president(to serve the empire), and let patriots have their own capitol and president(to serve the nation). You don’t need geographical secession for this. It just takes a bit of imagination and chutzpah, which goyim need in these times.

7. You are either a meta-Israeli or a meta-Syrian in the current order. Jews of course and blacks and homos count as meta-Israelis. They are above the law. They can do all kind of violence. Even when THEY do the violence, their victims are the ones who are condemned. Anyone attacked by blacks is a 'racist'. Anyone attacked by Jews is a 'Nazi'.

It’s like Israel routinely shoots missiles into Syria and drops bombs. It supports ISIS and Alqaeda in to bring down secular Arab governments. But no one in the US government calls foul. In contrast, Syrians are fighting for their lives against terror and foreign invasion, but they are painted as the bad guys, and ‘Assad must go’.

Same logic operates in the US. Jews use Hollywood to make hateful anti-Muslim movies. Jews make all those anti-white movies, some calling for mass murder of whites as ‘nazis’. Jews promote hateful rap calling for murder of cops. Jews fund ADL and SPLC and other hateful groups. Jews spread lies and bring US and Russia to the brink of war. Jews pull off violent coups in Ukraine. Jews use blacks to burn down cities as a warning that things will get worse if Trump remains prez for four more years. But Jews are never called out on it.

But if whites have had just about enough of the lies and fraud and commit 1/1000th of the violence, they are treated like Assad and Syrians. They are the worst and must be destroyed. And Trump, as the American Assad, must go. But the irony! After all, what did Trump do for 4 yrs? He gave Jewish Power free rein on foreign policy, threatened Iran, and murdered the hero Soleimani. The failure of Trumpism proved that no matter how much you scream & shout and gather in large crowds at rallies and protests, NOTHING is possible unless you name the Jew.

In FULL METAL JACKET, all the firepower did absolutely no good until one guy finally identified the source of sniper gunfire. If anything, all that extra firepower had only created the illusion that there were many more snipers and served as a massive distraction. So, more valuable than all the clamor at Trump rallies is the calm and collected statement of truth that “Jews did this.”

There are those who know the truth but fear speaking about Jewish Power because of the charge of ‘antisemitism’. But, there is a rational step toward necessary criticism of Jewish Power. Just state the plain facts of Jewish Power. Before we say it’s good or bad, just state it as fact to establish it as a fact that we all must live with and deal with. With the fact out there, people of all stripes will begin to discuss the problems of power as crucially interrelated to Jewish Power. And that can start to change things from both the ‘left’ and ‘right’.

8. What is a more shameful day in the history of Congress?

When a patriotic mob stood up to the crooked politicians approving a fraudulent election?

When elected representatives bowed to a foreign leader of a terrorist nation, Israel?

People standing up to politicians is more inspiring than politicians submitting to the supremacist ambitions of another nation and tribe.

Of course, the irony is that Trump, though the chosen leader of the patriots, was a top-contender with Nancy Pelosi is licking Netanyahu’s anus.

America is united most in whoredom to Jews. And yet, these congress creatures talk about ‘terrorism’ and ‘treason’. What a shameless bunch. But then, Jews control the gods.