We Must be on the Side of Truth because the Truth fears Freedom far less than the Lie does — Freedom & Honest Debate favor Truth over Lies, which is Why Jews as the Masters-of-Lies Now Attack Freedom — Jews fear Freedom will Expose their Power, so They protect the Lie with hysterics over 'Hate Speech' 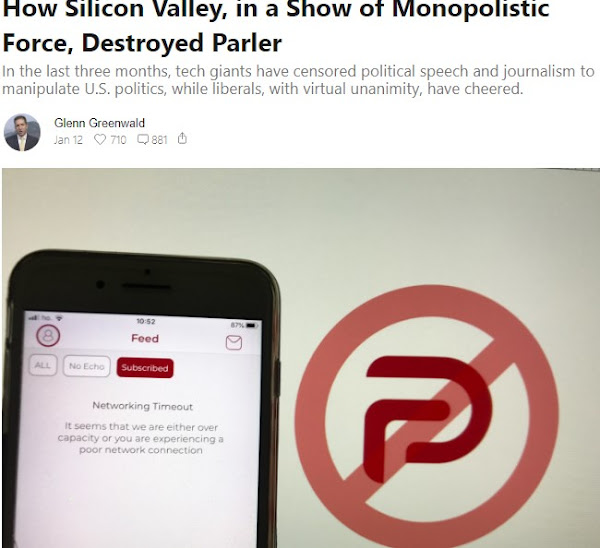 How Silicon Valley, in a Show of Monopolistic Force, Destroyed Parler. In the last three months, tech giants have censored political speech and journalism to manipulate U.S. politics, while liberals, with virtual unanimity, have cheered. By Glenn Greenwald - https://greenwald.substack.com/p/how-silicon-valley-in-a-show-of-monopolistic

The above article implies that truth is more on our side. After all, we aren't afraid of freedom of speech. While no side has a total lock on truth and no side is entirely false, it's generally the case that the side with more truth favors freedom(and free speech) while the side protecting the lie calls for control and restriction. The Lie fears freedom far more than the Truth does.

If boxer A says he is the best and if boxer B says he is, the better boxer will be happy to meet the other claimant in the ring. It is the lying boxer who will duck the contest and keep claiming to be the best without ever proving it out in the open.
All the censorious scum today are ducking the fight. They might as well be called 'ducks'. Globo-ducks and conzo-cucks make up the US discourse. In the past, black boxers wanted to face white boxers in the ring because blacks knew the truth was on their side as better boxers. White boxers, fearful of this truth, often ducked black boxers. Truth is like Jack Johnson in the ring.

In an honest and fair debate, the truth can be demonstrated via free speech and open presentation. If someone says 2 + 2 = 4 and if another says 2 + 2 = 5, the former can show that he is right in the court of public opinion. He can use a pair of 2 wooden blocks to demonstrate that 2 pieces plus 2 pieces do indeed make 4 pieces.
It is the person claiming that 2 + 2= 5 who is fearful of freedom and free speech because, when forced to make his case, he cannot show that 2 wooden blocks plus 2 wooden blocks make 5 wooden blocks. So, to protect himself, he might come up with a concept like 'bogus speech' and insist that the person who says 2 + 2 = 4 is 'bogus' and needs to be shut down for spreading bogusness. That way, he can maintain 2 + 2 = 5 as the favored truth. 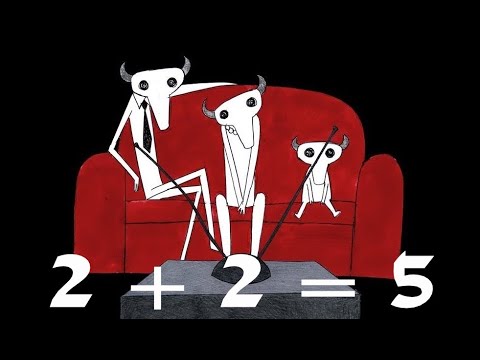 Now, some will say that free speech can unleash idiot holocaust deniers and people like Alex Jones, but such types can easily be exposed by the truth. Indeed, the main reason why the Holocaust Debate is restricted is not because the idiot Deniers are wrong(and they are wrong about most things) but because, in having an honest discussion about the Holocaust, it will also be proven that the Holocultists are also wrong on many accounts. While the Denier line that NO JEWS WERE KILLED is bogus, so is the myth that SIX MILLION DIED. A truly honest debate will lower the number of Jewish dead and blow up other shibboleths that have become the mainstay of the Holocaust Industry or Shoah Business. Truth will destroy the Deniers but also harm the Shoah Biz.
Also, keep in mind that people like Alex Jones thrive because the so-called MSM is so full of lies and suppress free discourse. MSM deceptions turn people cynical & suspicious and drive them to people like Alex Jones who claim to know the Secret Knowledge. If there were more freedom, free inquiry, free speech, and free debate, people like Alex Jones would lose their luster. While liars and lunatics will have their say under free speech regimen, they will be exposed and discredited sooner than later by those speaking the truth.

At any rate, Greenwald's piece has proven beyond a doubt that today's Liberals should be called LINOS or Liberals In Name Only. They are also LINOS because they LIE and say NO to freedom.

Unfortunately, Greenwald doesn't explain why 'Liberals' turned out this way. Yes, again it's Jewish Power. Jewish Liberals were never liberals first and Jews second. They were Jewish first and liberal second. For most Jews, liberalism was primarily a means to weaken and deracinate the goy majority so that Jews could gain more power and control. A typical Jewish Liberal will say to goyim, "Surrender your identity... and support OUR identity." On the occasion when Jews do support identity politics of goyim, it is as a weapon against the identity of the bigger foe, e.g. Jews supporting sham-versions of Ukrainian and Georgian nationalism against Russian nationalism or Jews supporting Kurdish nationalism against Syria.

In a nutshell, Jewish Power fears freedom because it will favor the truth that exposes the fact of Jewish Supremacist Domination. And so, Jewish Power promotes and protects the Big Lie and warns of freedom as a forum for 'hate speech'. What this really means is Jewish Power hates the freedom that allows the truth to be spoken to Jewish Power. Free inquiry will favor truth over lies. When both liars and truth-tellers have the freedom, the truth-tellers will win. Liars will win ONLY IF they are afforded freedom while truth-tellers are not. US is not a Liberal Democracy but a LINO Oligarchy where Jewish Liars have the freedom to say anything while cold facts and hard truth are suppressed as 'hate speech'. Watch the video below. This is what happens when the Lie meets the Truth in free and open forum.

Because Jews used liberalism as prop than principle, it's hardly surprising that they are for speech control now that they gained dominance. It's like the Bolsheviks spoke of freedom and justice on the path to power but were always about total control once they got the power. Still, if Bolsheviks were driven by ideology, Jewish 'liberats' have been all about identity.
But then, what about all the goy 'liberunts' who agree with Jews? That's due to the simple fact of our times: Jews lead, goyim follow. When Jewish Liberats were for free speech, goy Liberunts were for free speech. When Jewish Liberats are for shutting down free speech, goy Liberunts are for shutting down free speech. Jews lead, goyim follow. Master and dog.
It's the same among the conzos. Conzos will bitch and whine about how their free speech is violated by the 'Left' but then totally support the suppression of BDS by GOP and Democrats alike. They will rant about how the 'liberal' NYT fired Bari Weiss the free speech warrior(LOL) while totally ignoring the fact that, as student, she tried to have Arab professors critical of Israel fired.

Besides, even genuine liberals who believe in free speech have to go along with the Jews because Jews control the media. If you act like Chris Hedges or Glenn Greenwald, you will be demoted, fired, or worse. Also, Jews control the gods, true among both libby-bids and conzo-wonzos. The Tri-Supremacism of Just Jews, Holy Homos, and Noble Negroes has become such a fixture in the Western Imagination that people on both sides are more than willing to sacrifice freedom and principles to appease Jews and their gods.
But, there's something similar even in the Dissident Right, especially among the IQuters. IQuters like Jared Taylor, Derbyshire, Charles Murray, and others are so in awe of Jewish IQ that they would rather die than get real about the Jewish Problem and risk earning the opprobrium of the few Jewish friends they have. It's like many whites would rather die than be called 'racist'.

Greenwald didn't touch on the Jewish Question, maybe because he's Jewish himself or because the taboo is too powerful even for Subtrack; indeed, Matt Taibbi recently ridiculed the 'conspiracy theory' about Jews owning the media. ROTFL. I guess Joel Stein and Manny Friedman are conspiracy theorists. Friedman is an interesting case. Funny that Jews are more genuinely liberal in expression in a nationalist setting where they feel confident and secure. Maybe true nationalism is the best thing for liberalism. After all, a Jew in nationalist Jewish Israel is more likely to honestly and truthfully speak his mind than a Jew in diverse America where his priority isn't liberty, truth, and honesty but how-to-hoodwink-and-control-the-goyim-who-outnumber-us. That's why they are really just LINOS.

In a nutshell, Jewish Power fears freedom because it will favor the truth that exposes the fact of Jewish Supremacist Domination. And so, Jewish Power promotes and protects the Big Lie and warns of freedom as a forum for 'hate speech'. What this really means is Jewish Power hates the freedom that allows the truth to be spoken to Jewish Power.

Free inquiry will favor truth over lies. When both liars and truth-tellers have the freedom, the truth-tellers will win. Liars will win ONLY IF they are afforded freedom while truth-tellers are not. US is not a Liberal Democracy but a LINO Oligarchy where Jewish Liars have the freedom to say anything while cold facts and hard truth are suppressed as 'hate speech'.
Watch the video below. This is what happens when the Lie meets the Truth in free and open forum.