The Hispanic Vote: Can Republicans Compete with the Illegalism of Democrats? 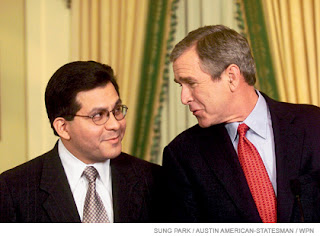 Some commentators say that the GOP must appeal to the Hispanic(and black) votes in order to win future elections. The problem is the only way to appeal to Hispanics is via Illegalism. There is nothing in the GOP platform that is anti-Hispanic. GOP welcomes Hispanics and wants Hispanics to succeed in America. GOP doesn't call for discrimination against Hispanics of any kind. Under rules of legality, GOP is a pro-Hispanic party.

What commentators mean when they say the GOP must appeal to Hispanics is it must be done on Illegalist terms. In other words, GOP mustn't only be equally welcome to Hispanics but must favor (even illegal)Hispanics over the legal white constituents who support the GOP; the GOP must favor illegal aliens over legal citizens and favor 'affirmative action' for Hispanics over non-Hispanic whites who are the mainstay of the GOP.
In a nutshell, it's not enough for the GOP to offer equality of law and opportunity to Hispanics; instead, Hispanics must be treated to extralegal privileges--such as 'amnesty' and 'affirmative action' over whites.  So, even though more than 70% of Hispanics go with Democrats, the GOP must offer better terms to Hispanics than to its loyal white supporters. (Extralegal privileges used to be the tool of European imperialists in non-white lands. Today, it is the tool employed by Jewish Supremacists to favor non-whites over whites in majority white lands.)

Democrats use terms like 'inclusion' and 'diversity', but their means of winning Hispanic vote has been through sheer favoritism and bribery. Hispanics are offered favors and things that should be illegal under the American Constitution. Illegal aliens are called 'undocumented immigrants' and showered with all sorts of benefits--though many of them don't even pay taxes. In other words, Democrats buy Hispanic votes. Worse, these votes are bought largely with white money. Whites pay bulk of the taxes, but liberals control most of the governments and bureaucracies--and courts--, and so Democrats get to decide how white tax-payer money is used. And it is used to bribe Hispanics to vote for Democrats.

Ideally, the GOP should appeal to Hispanics according to principles and not with payoffs. The principle should be EQUALITY UNDER THE RULE OF LAW. But, as it stands, America has gotten into the habit of winning over minority votes with bribes and special favors, something that began in the 60s with the Civil Rights Movement. Originally meant help blacks, it is now used to win minority votes across the board. Though the Nixon administration may have supported 'affirmative action' program for Hispanics in order to pit 'browns' against blacks to fight for welfare spoils, what it ended up doing is creating an alliance of blacks and 'browns'.

Anyway, as long as Illegalism is the mode of politics in winning minority votes, the GOP cannot win.
at November 07, 2012