How the Commoditization of White Women Serves Jewish Interests. 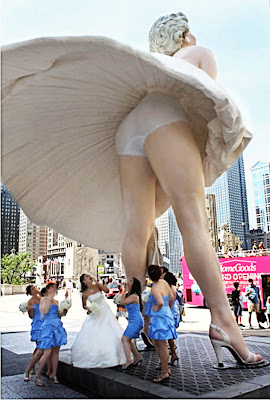 There is material reality and human reality. The reality of dollars and cents AND the reality of emotional value. You may buy or sell a car, but you would not sell your child. Car is a commodity, a child is not. Some parents give up their kids, but they are not allowed to sell them--unless it's an African Negro selling his kid to 'madonna'. There are things of material value and there are things of emotional or spiritual value. There's land that we can sell, and land that we cannot. We might sell a piece of real estate to the Germans or Japanese for them to build a factory, but we would never sell the Arlington Cemetery to foreign interests. It's hallowed ground. We would not sell the Jefferson Memorial to Thais or Russians.

No decent man would sell his mother, wife, sister, or daughter for money. Nor would he raise his daughter to see herself as meat to market and sell. And no decent woman would see herself as meat to be sold to just about any buyer. Mother, wife, sister, and daughter are part of the family. And all white people, men and women, are part of white racial family. Now, given the principle of individualism, white people can choose to depart from the white racial family and join the black, brown, yellow, or whatever racial family. If some white male individual or white female individual genuinely falls in love with members of other races, there isn't much that can be done about it. Lust and love work that way sometimes.

But there is something seriously wrong about the commoditization of white women from human value to material value. When white womanhood goes from emotional value to material value, it means it can be owned, bought, sold, and disposed by the highest bidder.  Though white women are the evolutionary product of tens of thousands of years from the womb of the white racial family, she no longer has any spiritual or emotional attachment to her racial family. Instead, she is just some packaged and glossy product to be sold as sex slaves in the so-called 'capitalist free market'.  (This is why libertarianism is no less damaging to the white race. Notice all the promotion of interracism with the black chef on South Park.)

It is no wonder that Jews, both Jewish 'male chauvinist pigs' and Jewish feminists, find great value in Marilyn Monroe. She was the ultimate symbol of the commoditization of the white female. She was brainless but stacked with a good figure. She was turned onto the cult of false glamour. She got ahead by giving countless heads to Jewish sharks in Hollywood. She had to spread her legs to every Jewish mogul who promised her goodies. And her tits and ass were splashed across the screen as dangling pieces of meat. This was different from sexy stars of the past. With Joan Crawford, Katharine Hepburn, and Barbara Stanwyck, sexiness was a part of their persona. With Monroe, sexiness was all that mattered.
She was not only turned into material property but fooled by Jews that maybe she wasn't so dumb. So, she took up reading and married an intellectual-artist like Arthur Miller. Jews used her as a consumer product and covered up this fact by pretending to admire her 'intellect' and 'great tragic soul'. We see this today in the porn industry. Jews use white women as pieces of meat, but all these girls are persuaded that what they're doing is 'empowering', 'liberating', 'progressive', and 'glamorous'. They are not merely sluts or video prostitutes but 'porn STARS'.

Of course, the commoditization of white women hasn't brought them any real freedom or empowerment. It only means they now spread their legs to Jewish money and black muscle. They only think they are 'liberated' because Jews have defined 'evil oppression' in terms of 'white male patriarchy'. Though white women are being enslaved by Jewish money and black muscle, they think they are being liberated and empowered because they are no longer 'chained' to 'white male patriarchal' power. It's like the character Iris in TAXI DRIVER thinks she is liberated because she is 'free' to have men pump her in the ass for $20. Would Jews be happy if their daughters ended up this way? Of course not.

The commoditization of womahood is aimed at white women. Jews have long feared White Power and perceived white power to be based on white majority rule over their land and the sacred emotional unity between white men and white women. So, Jews have sought to undermine white majority rule over white lands, and the election of 2012 is the fulfillment of the Jewish dream of white demise. And Jews have wanted to divide white men and white women. This was attempted by radical feminism, but it didn't work so well since it turned off so many women who wanted to be feminine instead of looking ugly without makeup and wearing overalls.
So, the new feminism embraced the commoditization of white women. Initially hostile to 'madonna', new feminism embraced her whole hog when her message was "My pussy is a commodity to be sold to the highest bidder."
And Marilyn Monroe, who used to be reviled by feminists as a 'sex object' has now come to be the Deflowered Mary of New Feminism. Instead of being seen as a victim of 'male chauvinist' piggery, she is seen as a visionary icon who paved the way for the sexual liberation of woman.  SEX AND THE CITY features the fusion within the new feminism: career women who dress and act like hookers. Since white womanhood has been commoditized and consumerized, it no longer has any emotional or spiritual tie to the white racial family. It is to be sold to any highest bidder. And with stuff like 'gay marriage', the marriage between man and woman is no longer a sacred bond rooted in biology and morality but just another form of modern lifestyle where anything goes.

No, the real sacred bond between white men and white women predate Christianity and has essentially been pagan-sensual in nature. Christianity was never a blood religion but a credo religion, whereas paganism was about blood. Greeks were into Greekness, and Germanic tribes had a powerful sense of their blood heritage--just like the Jews and Japanese. For a long time, Christianity became the defacto identity of the white race, but the core principles of Christianity were always anti-racial, which is why it eventually came to under white race-ism. Christian ethos, after all, gave birth to communism.

Truly sacred was the pagan-sensual connection between white men and white women. Pagan white men laid claim to their sacred ancestral lands and had the hearts of warriors. And white women respected white male power and prowess and were proud to be part of the white racial family and give birth to proud white boys and beautiful white girls. And this unity survived the Christianization of Europe, and it was the hallmark of most of white society through most of American history. It was that deep pagan-sensual bond that Jews sought to demolish in the new order.

There are two kinds of paganism: sacred and material. Sacred paganism is one of land and blood. Material paganism is Hollywood and MTV, and it commoditizes white women into tits and ass to be marketed like pieces of meat all around the globe. The white racial family no longer has any special claim to white beauty, white body, white dignity. Instead, white beauty is owned by Jews and abused by Negroes. White minds are owned by Jews too, as the best white minds who enter top colleges and come under the influence of political correctness spout the anti-white cliches fed to them by Jews.

Divide and conquer. Commoditize and sell. Jews are experts at it.