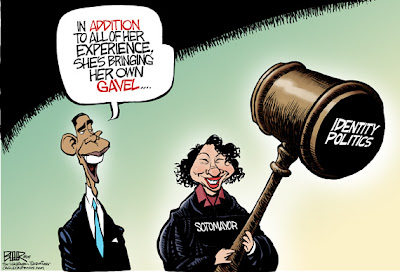 The following is a response to Ken MacLeod's article, "The ends of humanity
Socialism is dead, and the transhuman future looms. Is there any way to recover a sense of global purpose?" in AEON online magazine.

"Many on the left, of course, have found in identity politics a replacement for the universalism of their past. But identity can also be seized on by the far right. It can feed a resentful indifference to the plight of others that comes from having one’s own plight disregarded."

Ken McLeod is missing the point. So-called Identity Politics is rightist or even 'far-rightist'. The only reason why it's mistaken as 'leftist' is because non-white or anti-white groups are allied with self-loathing and suicidal white leftists and liberals. Muslims who call for Sharia Law in France and UK vote for leftist parties not because they support leftist or 'progressive' ideology but because stupid-sucker-leftists-in-power translates to more tribal power to their own kind, the Muslims. The REAL impulse and agenda as to why non-whites ally with white leftist groups are essentially rightist. Most members of Nation of Islam vote Democratic because they see the Democratic Party handing out more bribes to the black community. It is a case of black rightists allying with white liberals. White liberals get the vote, and blacks get more freebies. And most Hispanic-Americans ally with white leftists and liberals because the Democratic Party offers them more 'stuff' and looser immigration--which means more Hispanics in America which means more Hispanic power. If US bordered China or India instead of Mexico, and if most illegal immigrants were Asian, would Hispanic-Americans support illegal immigration and amnesty? Of course not. Why would Mexican-Americans want their jobs and opportunities to be taken from them by the Asiatic tide? Indeed, Mexican-Americans fully support Mexico's own draconian anti-immigration policies.

And why are so many Jews 'progressive'? The main reason again is essentially rightist. Jews are for maximizing Jewish power, and so in Israel where Jews are the majority, Jews will support nationalism, ethnocentrism, and tight border security. But in the US where Jews are the elite minority, they want to increase diversity because that allows the ultra-powerful and ultra-privileged Jewish elite to play divide-and-rule among the various goy groups. Jews don't really care about equality; they are promoting 'diversity' mainly to secure their own power.
Why was the British able to rule India for as long as they did? Because India was very diverse and divided by caste, language, religion, locality, customs, and etc. Therefore, the British imperialist elite, though greatly outnumbered by the natives, could always play one side against the other. When the Brits took over the subcontinent from the Muslim Moghuls, they sided with the Hindus. Later when the rising tide of Hindu nationalism challenged British authority, the Brits sided with the Muslims.
If India had been relatively homogeneous like China, Indians would have united much earlier to drive out the British. But because India was so diverse and divided, it took a long time for the people of India to develop something like a national consciousness and overthrow the yoke of British imperialism.

Jews want more homogeneity in Israel and more diversity in the US. More homogeneity where they are the majority and more diversity where they are the minority. If US were mostly white, there would always be the possibility of whites uniting against Jewish power. But if US becomes more diverse, Jews can choose and exploit all sorts of alliances across various ethnic and racial groups to boost their own power. As the Romans and the Chinese said, 'make barbarians fight barbarians'. Jews think, 'make goyim fight goyim'. It's what Jerry Springer does on his show. He invites white trash, brown trash, and black trash and make them bash one another while he, the clever Jew, stands back and watches amused.
So, Jewish 'progressivism' is really just a ruse for Jewish tribalism. Notice how even most so-called liberal Jews are silent about the massive oppression of Palestinians that is happening in Israel. NY TIMES is much more likely to bitch about what Chinese are doing in Tibet than what Israelis are doing to Palestinians.

The only people who are truly liberal or leftist are white gentiles who spit on their own identity, heritage, and pride in order to 'atone for their historical sins'--largely thanks to having been brainwashed by the Jewish-dominated media and academia--and to promote this murky thing called 'human rights' that overlooks Saudi atrocities in Bahrain but punishes the likes of Gaddafi. White liberals are all a bunch of suckers because they fail to realize that Jews, blacks, browns, and yellows are using so-called 'leftist' Identity Politics for their own rightist tribal interests.

Besides, the notion of 'white privilege' is ridiculous since the vast majority of whites have no privilege of any kind. They are not the descendants of the Rockefellers nor do they have anything like the wealth of Bill Gates, indeed not even of a doctor or lawyer. Most white people work all year around to make ends meet. And most of their ancestors are factory workers, toilers of the soil, truck drivers, plumbers, and etc.
It seems many affluent white liberals have it so good that they mistakenly believe that ALL white people lead the lifestyles of the elite 'creative globalist class' that grows richer and richer while white middle America grows poorer and poorer. Affluent white liberals PROJECT their own privilege onto all whites when, in fact, most whites don't have trust funds, haven't attended elite colleges, and don't have 'cool creative' jobs.

"It can feed a resentful indifference to the plight of others that comes from having one’s own plight disregarded."

That's pretty clever. Based on McLeod's airheaded progressivism, you'd think all those Identity Groups are full of regard for others and simply want equal justice for themselves. But let's look at reality. Do blacks care about non-blacks? Since when have blacks ever expressed sympathy for the victims of black crime and violence? Most of these victims are not rich whites but poor whites, poor browns, and etc.
And surely blacks know that so-called 'affirmative action' favors rich blacks over poor whites. It even favors black African immigrants--whose ancestors captured and sold slaves to whites--over poor whites.
And surely Mexican-Americans know that illegals from south of the border violated American laws to enter into America. Surely, Mexican-Americans must know that amnesty is a form of 'affirmative immigration' for Mexicans. I mean everyone else around the world has to legally apply to come to America and get in line. But all these illegals from Mexico cut in front of the line simply by exploiting the border between US and Mexico. How is 'amnesty' a form of justice? It is a form of favoring Mexican illegals to all other would-be legal immigrants. In other words, Mexicans don't give a hoot about other people. They only care about themselves.

And look at Jewish Identity. The Holocaust was a great tragic event, true. But notice how the Jews have cleverly exploited the Holocaust to wrap themselves in Holocaust Sanctity forever. Thus, if anyone criticizes Jewish Power--which is the greatest power in America and by extension in the world--, he or she is simply labeled and destroyed as an 'anti-Semite'. And look how Jews used the Holocaust cult to carry out lebensraum policies against Palestinians and wage war on neighbors. Look how Israel can occupy a people for decades and still remain as the closest ally of the US. Notice how Israel has 300 illegal nukes but receives billions in aid from US every year... while Iran, a nation with no nukes, a nation that has complied with all international rules on atomic energy, is being strangulated to death by Jewish-controlled America.

And does anyone wanna tell me with a straight face that gays are an oppressed group in America? After Jews, gays are the most privileged people in America. They use their gay-boys-network to favor gays over non-gays in high positions. Even liberal women have complained about how gay men monopolize the fashion industry.
And gays, working with Jews who control the media, have pushed the gay agenda and propaganda on all of us, indeed to the point where so many Americans now think that fecal penetration among men should the basis for marriage. I suppose if the Incest Lobby were as powerful and well-connected(especially to the Jewish community) as the gay community is, we would also be hearing about the evils of 'incestophobia'; there would be incest pride parades, incest would be associated with rainbow colors, and there would be calls for legalization of incest marriage or same family marriage. "In a world of so much hate and distrust, what is sooooooo wrong about a son loving his mother?"
at November 21, 2012