Commentary on "Hate Messages Show Up on University of Manitoba Campus" 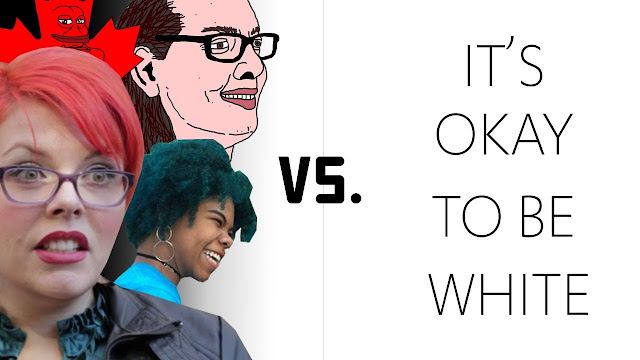 Now, why would it be wrong for whites to feel OKAY in being white? Because the only way to gain power over whites is to dehumanize them. Once dehumanized, white can gain(or regain) a bit of human worth only by seeking the approval of the Humanized Races. It’s like a dog’s sense of worth depends on the approval of its master. Dog is, by nature,submissive and seeking of approval.

White people are still economically and demographically dominant in Canada, but they’ve been ideologically and intellectually enslaved by PC that is enforced 24/7 by academia and media(and cucked out churches). Therefore, dehumanized whites can gain(or regain) humanness only by cucking out to and seeking approval from the humanized races, especially Jews, blacks, and homos who aren’t only humanized but ‘sacralized’.

According to PC, Jews-blacks-homos are the sacred groups. Non-whites are the humanized groups. And whites are the dehumanized group,and among them white males are the most dehumanized and have the most to atone for. As such, the ONLY way whites can gain humanness is by cuckery and dog-like toadiness to the humanized and especially ‘sacralized’ groups. Notice that the ‘sacral’ Jews count for much more than merely ‘humanized’ Palestinians. And in the case of brown George Zimmerman and black Trayvon Martin OR the Muslim store-owner and black Michael Brown, the ‘sacral’ blacks trumped the merely ‘humanized’ Muslim merchant.

That is why even an innocuous sentiment like “It’s Okay to be White” is regarded as ‘hate speech’ by PC. It doesn’t say whites are better or should rule the world. It only humanizes whites, but THAT is threatening to PC because globo-homo supremacism depends on White Submission. If whites regain humanity and autonomy, they will no longer feel that they must cuck out to OTHER groups to possess human worth. They will feel they have innate humanness regardless of what others think. Then, globo-homo will lose control of whites. There is a movement, MGTOW(men going their own way), but that is silly as men cannot survive without women. But WGTOW(whites going their own way) is sound because whites can do just as well(actually much better) without non-whites and other hostile groups constantly berating and leeching off them.
at November 05, 2018