How amusing to witness the rise of Zionist-Muslim alliance in the Democratic Party.

I find this curious. Donald Trump, sincerely or not, condemned Bush's WMD lies and Iraq War. He condemned Obama and Hillary as destroyers of Libya and enablers of ISIS in Syria. He said he would strive for greater stability and peace in the region(though it must be said his record in Yemen, as continuation of Obama's policy, has been disastrous; and his Iran Policy has been worse than Obama's). In other words, less Invade, less Intervention.

In contrast, Hillary, as the Democratic candidate, was threatening WWIII with Russia over Syria, which means Middle East will blow up even more. Also, she and her globo-feminist cohorts were largely responsible for the chaos and destruction in Libya and Syria.

Now, you'd think most Muslims would side with Trump over Hillary and Deep State Democrats. Granted, the GOP has been just as belligerent(if not more so) than the Democrats when it came to the Middle East, but Trump ran in 2016 as the most anti-war candidate, thus alienating many Neocons in the GOP. And as President, despite his sometimes volcanic rhetoric, he restrained the hawks when it came to North Korea and Syria. For these reasons, one would expect Muslims to be more favorable toward Trump as the politician who is less likely to spread more hell-fire and brimstone in their homelands in the Middle East. And I think they would have been... if not for the issue of immigration.

Suppose the US has had a zero-immigration policy since 1965 and took in no one from the Middle East, North Africa, and Muslim nations. Then, Muslims would have no hope of entering the US. Under those circumstances, I think most Muslims living in their home nations would have preferred Trump over Hillary(and Democratic Deep State hawks). Their worldview would have more-or-less run parallel to the position of the Alt-Right and Paleo-Con types who call for no more wars. They would have reviled Neocons, Zionists, and Liberal Interventionists.

So, why do so many Muslims(there and here) side with the very Americans(Neocons, Liberal Zionists, Democracy-pushers, hawks, New-Cold-Warriors, etc) who are most hellbent on wreaking more havoc in the Muslim World? Why do they fear America First more than America Thirst(for oil and domination)?

Because... even though the Alt-Right, Paleocons, and America-Firsters are more likely to be for peace and non-intervention, they are also likely to be more anti-immigration-invasion.
For Muslims, entry into the West is like a drug. They crave it and dream of it, indeed so much so that they will side with the very people who are doing most to destroy the Muslim World, the very homelands of Arabs and Muslims.

In a way, America/West has a narco-drug effect on all the world. These non-white folks seeking access to the West will join with ANY SIDE that serves the role as the PUSHER-of-the-'dream'. It's like an addict will neglect his own house, family, and kids to get another fix of that smack or crack from the dealer.

The desire to go where the mammoths are(white wealth is mammoth meat to the migrant-hunters of the world) distorts all values. It was the desire to go to America that made Fabrizio betray Michael in THE GODFATHER. He didn't personally hate Michael or his bride. But he wanted to go to America so badly that he was willing to betray the very people who'd hired him and trusted him.

This craving for the Invite-Immigration-Smack makes Muslims form an alliance even with Zionists and Neocon War-mongers. Also, despite their noises about Islamic values and Middle Eastern pride, they privately prefer rule by whites than by their own cousin-humping kind. 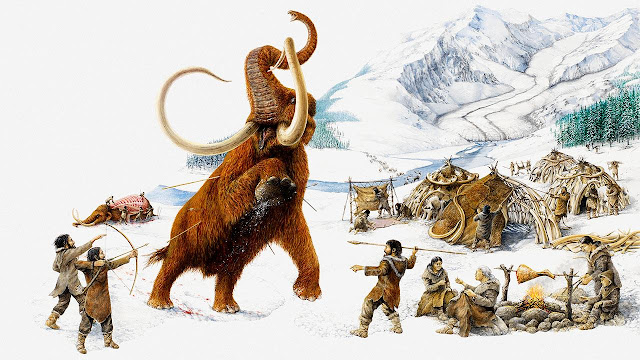 People do care about tribe and culture, but they are still organisms and prefer the Good Life, the place where the mammoths are. This is true of anyone. Suppose one had to choose between one's homeland where it's hot, dry, and requires lots of work to get by AND another land where the temperature is nice and where fruits grow in abundance. One's cultural sense might cling to the homeland out of loyalty and heritage, but one's organismic self will want to go to the land of mangoes. This is true of animals in the wild. They go where the plants, game, and water are. Among humans, it's somewhat different because humans don't just live off nature like their primitive ancestors did. Humans build their own economies, and it just so happens that whites have proven most adept at creating the best economies and most functional systems. (Even if non-whites were to face discrimination in the West, they'd still live in a stabler and more orderly system where whites do things better than non-whites do in their own lands. So, even left-overs and crumbs from whites are more than what they get in their own homelands where they may not be subjected to discrimination but have so little because people are so corrupt, inept, and do a crappy job of running things.) Indeed, it's amusing that so many Third Worlders head to Sweden, a cold dark part of the world with long winters(much of it in total darkness). So, why go there? Because Swedes build, manage, and run good economies, whereas non-whites are dysfunctional even in nicer lands with more natural resources, good climate, and etc. One thing for sure, the non-whites are not going to Scandinavia for the weather. They are going to feed off white mammoths. (As a result, whites may go extinct just like the mammoths that couldn't survive the onslaught of migratory hunters.)

Because whites developed the Midas-touch, they were drawn to primitive and backward places in the Age of Empire and could make a positive difference. Whites could go to South America, Australia, New Zealand, Africa, Asia, and etc. and build something from nothing. Even the great Chinese civilization was amazed by what the British could do with Hong Kong almost overnight. Turn a muddy island into a booming city in a short span. But the Age of Empire eventually came to an end. And whites were forced to go back to Europe from many parts of the world that they'd colonized. And for a time, non-whites believed they could do just as well as whites by building up their own nations... but only a handful of nations succeeded in this. And so, lacking the Midas touch, the ONLY way they could have the good life was by migrating to white nations. So, we are now in the Age of Demographic Imperialism. Reverse-imperialism, this time the migration of non-white peoples without the Midas touch heading to the lands of white people with the Midas touch. If, in the Age of Empire, white colonizers made something out of nothing in non-white lands, non-white reverse-colonizers will make nothing out of something as they leech off whites in ever greater numbers. Also, ACOWW or Afro-Colonization of White Wombs will create destructive black kids out of white wombs. Black leech-sperms will feed off white wombs to create horrible Negrolets.

The notable exception has been Israel. If the post-war West has been mostly about non-white migration-invasion to white nations, Israel was a concerted effort among Jews to favor cultural obligations over organismic wants. Materially, any Jew is better off in Europe or US than in hot and dry tiny Israel. But the call of culture inspired many Jews to settle in the Holy Land and defend it. But then, Jews, like white gentiles, are another people with the Midas touch, able to create something out of nothing. Jews know this, and Jews know others want what they got, so they erect barriers to keep their mammoths to themselves. But Jews in America fear that their mammoths might be taken by non-Jewish whites one day. So, Jews welcome more immigrant-invaders so that diverse gentiles will squabble over the white mammoth meat than salivate after the Jewish mammoth meat.

Things were much simpler right after WWII. Back then, neither the US nor Europe allowed mass immigration-invasion from the Third World. So, people in the Third World thought in terms of 'kick out imperialists' and 'do whatever is necessary to boost our power and sovereignty'. But ever since the West opened its door to immigration-invasion by non-whites, the priority of so many in the non-West is going to the West for easy mammoth meat than fixing their own nations and farming their own mammoth.

It's like how the slave trade distorted the economies of West Africa. While slave trade had always been a fixture among black Africans, the tremendous amount of wealth to be made from the Atlantic Slave Trade made so many blacks drop everything to go capture other blacks to sell to whites. Things got so bad that the Africans sacrificed humans to crocodile gods to stall the decline.

It's also like any gold rush. People hear about get-rich-quick opportunities and drop everything to look for gold. All these non-whites are addicted to White Rush. White lands are where the mammoths are, and it is the quickest and easiest way for them to attain anything in life. It might take a lifetime or many generations(or never) for many parts of the non-West to achieve anything approaching Western levels of success. But if you go to the West, they offer you sanctuary, benefits, favors, protection, housing, welfare, and etc. Also, there are lots of self-hugging white assholier-than-thouists who will defend you and even elevate to saint status.

In the US, Jewish power is undeniable. Jewish power may be less extensive in the EU, but Shoah Worship is stronger there than here. Also, EU nations are essentially servant-states of the US, and their intellectuals and bureaucrats take cues from ideas emanating from Harvard and Yale and US media.

Anyway, all this highfalutin talk of 'liberty', 'inclusion', 'diversity', 'proposition', and etc. are BS. It is really about nonwhite craving for white mammoth meat. It is organismic. Nonwhites pressure the white world to live up to 'high ideals' not because they prize principles but because they want access to easy white mammoth meat. If all of the US was one giant Detroit, would Jews or Muslims or any other people care if US was a 'proposition nation' or not? No one would want to come here, just like no one wants to move permanently to Africa.
at October 18, 2018