Commentary on "A Crash Course on the True Causes of “Anti-Semitism”, Part II"(by the Saker) 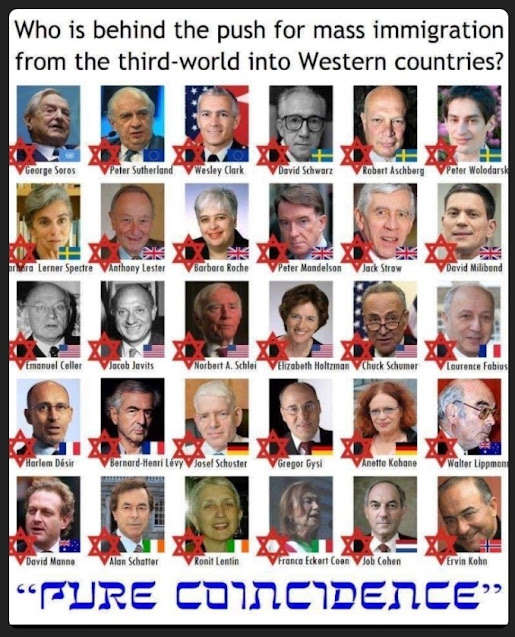 The Unspoken Truth about the history of American Power is that went from Wasp Elite to Jewish Elites. It didn't go from Wasp Elites to All Americans.

‘Antisemitism’ is now a trick term used by Jewish Elites to discredit any criticism of Jewish power and influence.

Contra the prevailing PC Narrative, the Power didn’t go from Wasp Elite Rule to All-American-rule(or power dispersed equally and proportionally among all groups of Americans). In other words, the power didn’t go from the Wasp tower to the American square. Rather, it passed from Wasp tower to Jewish tower. It went from Anglo-elitism to Judeo-elitism. THAT is the crux of the problem of American Power. If anything, the New Elitism of Jewish domination is even more unequal and unfair than the Old Elitism of Wasp domination. After all, Anglo-Americans made up a huge part of America. So, Wasp elites were representative of large section(the majority well into the 20th century) of America. In contrast, Jews are only 2% of America, and that means Jewish Elite Rule is really about domination over the 98% by the 2%.
Now, Jews may flatter themselves by claiming that their power is used for the good of all Americans and all peoples around the world. Really? Just ask the Palestinians. In fact, Jewish power compels the US to support Zionist mass murder of Palestinians. And Jews use US power to subvert Russia, Iran, Syria, or any other nation hated by Jews. Also, Jewish Power shuts down BDS movement in the US. Also, Jewish power favors the network of Jewish oligarchs in Las Vegas, Wall Street, Silicon Valley, and Hollywood who rake in all the profits for the globo-expansionist Tribe. And the ONLY reason Jews push for Mass Immigration-invasion is to increase Diversity among goyim so as to play divide-and-conquer over them. Notice Jews do NOT push for non-Jewish immigration to Israel.... even as they demean Hungary and Poland for wanting to maintain their ethnic, cultural, and territorial integrity.
According to the Jewish Narrative, Bad Old America was about Wasp elites hogging most power and privilege for themselves. So, the rise of Good New America was about the Power passing to All Americans equally. But it didn’t happen that way. The once-Wasp-Power went mostly to Jewish elites instead of to All of America equally. THIS is what Jews are trying to hide. They want us to believe either that

(2) The Power still remains with Big Bad White Male Privilege, and therefore, Jews and non-whites must work together to bring down this Nasty Wasp Country Club Power.

The problem with this Narrative is that it totally ignores the fact that Wasp Elite Power passed over to Jewish Elite Power. In other words, Jews are the ‘new wasps’. Actually, it’s worse. If Wasp Power was out in the open, Jewish Power remains hidden. It is plain-as-day for anyone who wants to notice, but if the observer is honest about what he sees, he is denounced and destroyed as an ‘anti-Semite’.
If awareness about ‘antisemitism’ in the past was about protecting vulnerable Jews from bigots, it is now about safeguarding the ultra-power of the super-privileged Jewish elites. Jewish elites simply want us to remain blind, deaf, and mute about the fact that Wasp elite power did NOT surrender to All-American Power of All Groups, white and non-white, but instead surrendered to Jewish elite power.

Jews want non-white Americans to see Jews as allies and fellow comrades against white elite power. In other words, the American People are to believe that Jews have been anti-elitist and working hard to transform the elitist nature of American Power(in the hands of Wasps) into something more democratic and egalitarian. Burn down the white-shoe country clubs of privilege and turn American Power into one big square for everyone.
But in fact, Jewish Power did no such thing. Rather, it took over the elite institutions from the Wasps and has been ruling America on the basis of “Is it good for the Jews?” Jews didn’t burn down the country clubs. They took them over or built bigger and more lavish ones for themselves. To hide this fact, Jews train and hire yellow dogs like Sarah Jeong to bark at the ur-specter of White Privilege.

The fact that Jewish power hates Populism with such rabid virulence gives the game away though. Elitism is their thing. As for the former Wasp elites, they carry on with the charade of dominance even though they take their orders from the Jewish Bosses. Why? Because as long as they obey the New Jew Bosses, they are given a seat at the table. Clintons, Bidens, and Bushes can have a seat at the table as long as they sing hosannas to Jews and Israel while turning up their noses at Deplorables and Palestinians. So, we have Wasp politicians signing on to Wars for Israel and promoting Hatred against any people Jews don't like: Palestinians, Russians, Iranians, Syrians, etc. Also, cucky Wasp toadies kinda like the idea of 'White Privilege' because, despite its anti-white rhetoric, it gives the impression that Wasps still have the Top Power. Thus, craven Wasp cuckery can masquerade as magnanimity. Thus, Wasp comprador elites(who suck up to Jews) can play at being generous and 'inclusive' of non-whites and helpful to Holy Holocaust Jews even though, in fact, they are just toadying up to Jewish Power that uses the smokescreen of  'white privilege' to conceal the reality of Jewish Dominance.
at October 29, 2018