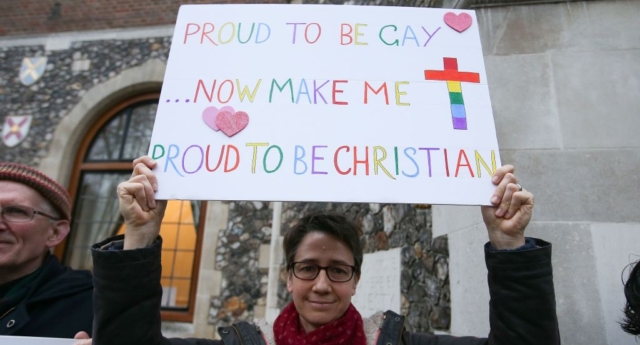 Unfortunately, there was hardly any non-religious opposition to the Homo Agenda except on willy-nilly libertarian or legalistic grounds. Hardly anyone mentioned the facts of biological hierarchy, i.e. real sexuality is meaningful, purposeful, and essential whereas homosexuality is a deviance in organic terms and perversion in moral terms. The secular and rational counter-homo arguments were heartless and bloodless, utterly failing to recognize the Homo Agenda as a war on biology and morality that it really was. As for the religious component of the opposition, which had long predated the half-hearted secular opposition(not least because the Bible adamantly commands that homosexuality is a sin), it simply didn’t have the means to summon up the kind of arguments that could persuade modern educated people. (Perhaps, the secular opposition to the homo agenda was weak because it was so unprepared for such a challenge. After all, most of human history, religious or not, had taken as granted the wrongness of homosexuality. There was no need to argue against it since it was understood that EVERYONE knew it was sick and gross even if not wicked and sinful. Perhaps then, it will take some time for a truly effective secular opposition and immune system to the homo agenda, which has metastasized into full-blown Homomania, to develop. As things stand, Homomania is the HIV of Western morality and culture. It is eating away at everything.)

At any rate, nothing in a republic/democracy like ours can be based primarily on religious doctrine or dogma. We can’t say “Evolution must be banned because it is an affront to God’s Creation.” Likewise, we can’t let religion decide matters on law and sexuality. We can’t ban or deny something on the basis of "God said so".

But then, opposition to the homo agenda didn’t need God on its side. Upon close scrutiny, it should have been obvious that a merely secular opposition had not only sufficient truth but all the truth on its side. What is this truth?
Truth is that some people are born homo and can’t being what they are. Therefore, okay, let homos be homos and do their own thing in their own spaces. However, homosexuality cannot some kind of ‘new normal’ but will always be a deviance that has no biological meaning or sexual purpose. That is also the truth about homosexuality. Among men, homosexual acts are downright gross and putrid. It’s about homo fecal penetration.
That said, we can acknowledge certain cultural benefits of homosexuality. Not in what homo do ‘sexually’ but in how they see and feel things that opens up new creative possibilities. Homosexual sensibility has certainly left its mark on arts & culture.

But homosexuality has no value in biology and family. Homosexuality cannot produce life. That is a truth. Marriage is a fusion of biology and morality. It must be based on the truth of life and the necessity of moral values. ‘Gay marriage’ is based on a lie. It makes believes that homosexuality has equal value with real sexuality. It makes believes that Tim Cook’s anus has the same value as his mother’s vagina that birthed him. Another observable and undeniable fact about homosexuality is that ‘gays’ tend to be vain, narcissistic, and self-centered in their ego. So, they have no sense of limits in terms of ‘sexual’ excess or self-aggrandizement. Homos have even pushed ‘gay rights’ into Gay Rites. They went from secular demand for ‘equal right’ to a quasi-spiritual demand to be worshiped as new angels and saints. Homos have even made ‘pride’ synonymous with homosexuality. They are so vain that they want to claim and own entire terms for themselves. And their chosen symbol hogs all the colors and associates homo fecal penetration and tranny penis-cutting with the miraculous rainbow that used to be primarily associated with the story of Noah where life is preserved by saving male/female pair for each animal.

Indeed, the Homo Agenda won not by rational argument but by the irrational appeal of sensual-sacro-propaganda. TV shows and Movies featured an endless parade of saintly homos were so well-groomed and more-normal-than-normal. Even as Progs generally mock 1950s culture of FATHER KNOWS BEST and the DONNA REED SHOW, homos were given a GAYS-KNOW-BEST make-over.
Homos won by having at their disposal the power of advertising, fanfare, spectacle, parades, and etc. It’s like communism mainly cast its spell with songs, music, pageantry, rallies, and etc. Its success owed more to the appeal of the irrational. It is no wonder that homos soon targeted churches and sought to associate everything holy & sacred with homo colors, which are intrinsically ridiculous since what does the rainbow have to do with homo fecal penetration or lesbian poon-mooshing? Or tranny penis-and-testicle mutilation?

Most importantly, the main reason the Right failed to oppose the Homo Agenda was due to its slavishness to Jews and the Rich. As many homos became rich, powerful, and well-connected, more and more money-worshiping members of Conservative Inc. began to suck up to Homo Lobby. It became a status-thing to be pro-homo in elite circles. Consider how S.E. Cupp broke down with tears of joy when ‘gay marriage’ was forced on the entire nation. Look how the kids of the Bush family are all crazy for homo, homo, homo. It’s what fancy elites go for, so anyone who aspires for higher status must follow along and flash the same cues. (Also, homos built up a network of spying, gossip, and blackmail. If anyone opposed their agenda, they would be ‘outed’ and scandalized. Look how the homos and their allies in the media dragged Carrie Prejean’s name through the mud when she opposed ‘gay marriage’ at a beauty pageant. They dug up all the dirt on her and attacked her to send a warning to all women what will be done to them unless they comply with Homomania. Homo men are especially foul in personality. They have male aggression plus female bitchiness and hysterics, like with the homo guy in MEAN STREETS.)

As the GOP became slavish to everything Jewish, Conservatives dared not voice any real opposition to homosexuality lest Jews get upset. Jews sent out a message, “the homo agenda is OUR baby, and we’ll be very very displeased if YOU oppose. Saying NO to the Homo Agenda is saying NO to us wonderful super-Jews”. So, Conservatives only pretended to sort-of-oppose it while effectively doing NOTHING to expose and condemn the sick, perverse, and evil agenda of Homomania. Look how even Ross Douthat(the so-called Catholic) and Charles Murray caved. That bald-headed lowlife bent over to Tinkerbell Curve.

The failure was due to the lack of courage to handle truth and facts on a rational and moral basis. After all, marriage is a primarily a Moral Institution rooted in proper biology. Morality must be based on truth and justice, and it is neither truthful nor just to pretend that what homos do to each other has equal biological purpose and moral value as what men and women do in their practice of proper sexuality. Or that what trannies constitute health of mind and body. Since when is using Frankenstein medicine to remove perfectly healthy organs to be replaced with fake organs of the opposite sex a sane or moral act?

We have spineless idiots on the Right. But then, the Evangelicals and Mormons are so eager to suck up to Jews and Money that they’ve also muted their opposition to Homomania. Mormons will do ANYTHING to have Goldman Sachs build more office in Salt Lake City. And Evangelicals will do ANYTHING to please Zionists and prove it is not filled with ‘hate’. Since Jews say, "If you’re not with homos, then you are against us Jews", the craven Mormons and childish Evangelicals have decided to add Homo-Worship to their liturgy.