Response to a Comment on "Bullseye" by Steve Sailer. Jewish Scholarship vs Jewish Merchants. 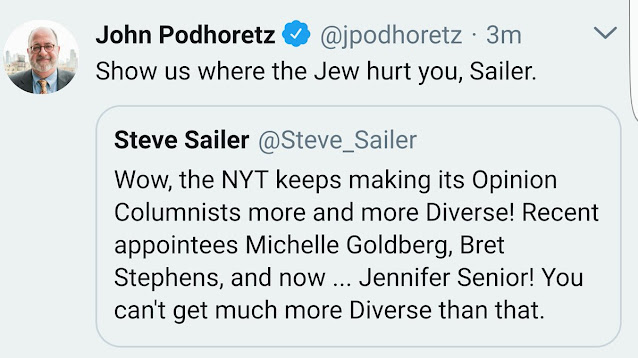 “Jews prioritize scholarship and have been widely persecuted, therefore Jews don’t really tend to have genes that correlate with intelligence.”

Jews were rarely persecuted for their scholarship, at least until the late modern era. It was usually for their business practices and promotion of vice in culture. This hatred of money-makers can be found in Jewish culture itself. Much of the Bible is about moralistic prophets condemning the materialist money-grubbing Jews. Greed eventually leads to decadence, and Prophets warn of God's wrath that descends upon Jews to teach them a lesson over and over and over. Much of the Bible is about the scholarly moralism of Jewish prophets vs wanton materialism of Jewish merchants who lose their way in favor of idolatry.

Same can be found in Chinese culture. Confucianism prized the scholar and hated the merchant, considered the lowest of the low. And anti-Chinese sentiments in Southeast Asia had little to do with Chinese-devotion-to-books. It's because they love money. I doubt if any Indonesian attacked Chinese because the latter was reading the Analects or Tao Te Ching. It was about Chinese business acumen and practices.

For much of Jewish history, there was a kind of understanding between the Rabbis and Merchants... just like the Saudi Royal Family(of tycoons) arrived at an understanding with the Wahabi sect.
Jewish merchants would make lots of money but donate generously to Rabbis who, in turn, would be less judgmental about avarice. Same kind of relationship existed between the Church, Aristocracy, and Merchants in Christian Europe.
And even though Confucianism officially condemned merchants, it was the business class that made the economy work, and so, it was tolerated and protected by the Power managed by the scholar class. And today, the rich class in the West maintains a wink-wink pact with the Prog-priesthood of PC. Homo Worship binds them together.

Still, there was a strain of Jewishness that was virulently anti-Jewish-profiteering. Christianity began this way, with Jesus condemning the close ties between Temple and Money. And Confucianism was anti-Chinese-profiteering. It favored scholars and peasants(at least in prestige) over the merchants.

This all came to a head with Marxism. He declared War on Greed. It was a new round of Jewish prophets vs Jewish merchants. But if this sort of thing was limited to the Jewish community in the past, it became international because Marx was a Christianized atheist German living in the center of World Power. If ancient Jewish prophets kept the debate within the community, Marx universalized the conflict within the Jewish Tribe between prophets and merchants(just like Jewish feminism later projected Jewish male/female neurosis on the rest of humanity). Unlike Christianity that has a passive and otherworldly element, Marxism said heaven could exist on earth.
This did make Jewish scholarship dangerous and threatening in ways that past Jewish scholarship hadn't been. For most of Jewish history in Europe, the main reason for the anti-Jewish hatred was Jewish 'merchantry'. Most Jewish intellectual ideas were for fellow Jews and remained in the community. So, Christians had little interest in Jewish learning or ideas. But Marxist scholarship spilled out into the larger sphere and affected all of humanity. Many goyim welcomed it as liberating and empowering. Many goyim opposed it as radical, repressive, and Jewish. Granted, it wasn't technically Jewish since Marx was irreligious, didn't consider himself Jewish, and called for World Revolution. But it was especially appealing to Jews just like Freudianism was. The prophetic style of Marx was very much in keeping with Jewish tradition.

Marxism spread to China, and Maoism was maybe the greatest war on greed in the name of virtue. But, both Jews and Chinese learned that you can't run a society on moralism and prophecy alone. So, both peoples have arrived at their own 'end of history' of coordinating moralism with materialism. This is maybe easier for the Chinese because China is about Chinese ruling Chinese. Chinese leaders figure that common and basic morality would be good for most Chinese. Wealth is good but must be built on the shoulders of virtuous people. Excessive capitalism has made Chinese overly materialistic and soulless, and the regime wants to change that.
In contrast, Jewish scholarship is more ambivalent about moralism. While goy majority moralism may make for a more orderly and sound society, it also cuts into Jewish profits in Vice Industries like gambling. Also, moralism makes the larger community feel proud and confident. Christian moralism certainly strengthened goy righteousness. To weaken the goy majority, Jewish merchants and Jewish scholars work together to theorize and market immorality-as-the-new-morality. The result, from stuff like 'gay marriage', is quite obvious.
at June 26, 2018