Will the Historical Dialectics of the US Invasion/Occupation and Taliban Resistance lead to the Synthesis of Better Afghanistan? — The Inadvertent, even Absurd, Fortunes of Historical Tragedies

FALL OF AFGHANISTAN IS NOW | WHY AMERICA FAILED 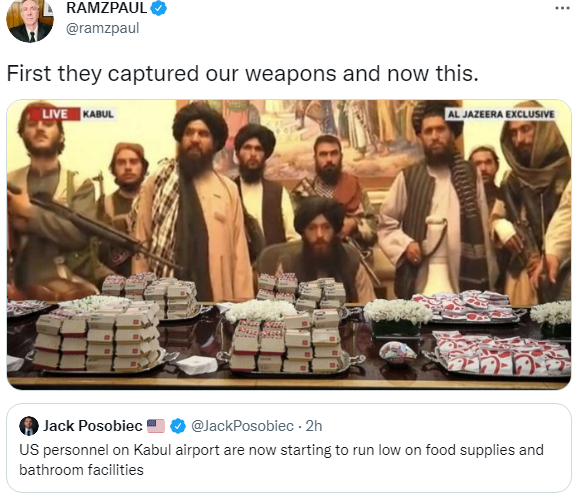 https://asiatimes.com/2021/08/forever-war-benefiting-afghans-follow-the-money/
The Afghan War was tragic for Afghans in many ways. But less so than many wars. For one thing, there wasn't much to destroy in Afghanistan. It wasn't like Germany or Japan smashed in World War II. Also, whatever had been standing had already been reduced to rubble in the long wars in the 1980s(when Soviets were there) and in the ensuing 'civil wars' among the tribes and factions. Also, Taliban were hardly great builders. They kept the country at the medieval level. Taliban folks were content to be backward, which they conflated with faith and piety. Even though the US invasion was initially brutal with devastating air strikes, it wasn't long-lasting because there really wasn't much to bomb and the Taliban soon scattered to the four winds. With so many mountains and caves, most Taliban just fled and hid. Soon after the invasion, most of the war consisted of drone strikes and limited skirmishes. Though the drone attacks killed some innocents, the entire casualty was in the thousands. Many more Vietnamese died in a single US bombing strike under Lyndon Johnson or Richard Nixon. So, this was hardly a genocidal kind of war, which could be said of certain chapters of the Vietnam War. Also, due to demographic dispersion and geographic barriers, the US occupation didn't unleash the bloodbath that the Iraq invasion did. In Iraq, US presence in the flat sand led to religious factions tearing each other part. There were no mountains to separate the Sunnis from the Shias. Also, whereas Afghanistan before and after US invasion had continuity in Pashtun representation, the Iraq invasion led to a sudden power shift from Sunni to Shia domination. This led to Sunni rebellion and Shia reprisals, a horrifying cycle of violence. Also, as certain Neo-Con or Zio-Con elements feared warm ties between Shia-ruled Iraq and Iran, they inflamed Sunni violence to make Arabs kill Arabs. Afghanistan, for the most part, avoided such internecine bloodbath under US occupation, at least on the scale of what took place in Iraq. If there had been no 9/11 and no US invasion, the Taliban might have remained as they were. Rigid, backward, insular, and isolated. There would have been hardly any opportunity for growth and development. This is where imperialism can do some good. Not because imperialists are good-hearted and well-meaning but because they shake things up. Would Japan or China have made progress into modernity if they weren't forced at gunpoint? Without Western Imperialist aggression, the ruling dynasties there would have suppressed any reform or change that could conceivably threaten their total grip on power. Indeed, they regarded stasis as synonymous with harmony with nature, history, spirituality, and the cosmic order of things. Only an outside force could act as catalyst for revolutionary and fundamental change, for good and ill. Though all societies evolve over time, the fact is East Asia didn't have sufficient internal spark/fuel to bring about fundamental change from within. This was also true of the Ottoman Empire that, upon falling behind the West in science and technology, simply couldn't muster sufficient energy for change. It took the traumatic defeat in World War I that forced a true transition to modernity. 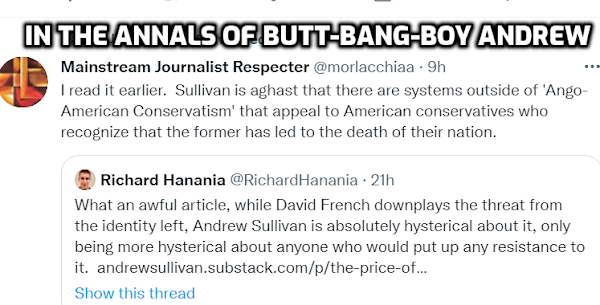 Now, it'd be foolish to hope that the Taliban will ever be like the Kemalists of Turkey, or even like Gaddafi of Libya, Nasser of Egypt, or Hussein of Iraq, all of whom embarked on modern and mostly secular development, albeit in alignment with Muslim values. And we can't expect the new Taliban regime to resemble Islamic Iran that, for all its religiosity, fully adopted modern science and technology(and even most modern facets of living, minus the overt decadence). Though the worst case scenario is that the New Taliban, high on the hubristic fumes of 'victory' over the US, will revert to the old ways, it's more likely that it will be more pragmatic, worldly, shrewd, realistic, and a bit wiser. It is the dialectics of history. Old Taliban had the power but got nowhere. US invasion forced change and built much infrastructure but its influence, at once overbearing and underwhelming, didn't catch. But, some commentators are hoping that the dialectics of Taliban resistance and US reconstruction could lead to the synthesis of a New Taliban that is more savvy in politics and business. Of course, such changes are possible without foreign invasion. Mikhail Gorbachev embarked on profound changes in the Soviet Union. Maoist China made the transition to Deng-ist China, and communist Vietnam adopted market economics. But the Taliban were so anti-modern that it's unlikely they would have done much to develop the country on their own without foreign intervention on a massive scale. Though the US failed to turn Afghanistan into a compliant outpost, it did construct lots of roads, buildings, airports, and infrastructure. Yes, much of the money disappeared into the hands of corrupt politicians and 'contractors' whose only talent was for swindling Uncle Sam(and the US Military-Industrial-Complex itself is a massive racket defrauding the US tax payer). Still, in the ensuing twenty years, Afghanistan did end up with cities with many more buildings and amenities. And a new professional class did learn certain skills in governance and management(and these people are likely to keep at those jobs even under the Taliban — surely, the US can't bring all of them as refugees, and the New Taliban might actually value their skills). Prior to the US invasion, Taliban-ruled Afghanistan was on friendly terms with only one major country: Pakistan. It had alienated Russia, China, Iran, and other surrounding -Stan nations. It was seen as a festering sore in the middle of Central Asia. Afghanistan didn't want anything to do with most other nations and vice versa; the feelings were mutual. And as long as it was ruled by the backward Taliban, it was hardly a threat to other countries that were far more developed and powerful. It could be ignored. Things changed with the US invasion. All of a sudden, it went from a backwoods(or back-mountain) country of ignorant nobodies to the base of US globo-imperial operations. Russia, China, and Iran feared that the US planned to use Afghanistan as part of an encircling campaign. Pakistan regarded US presence as Uncle Sam breathing down its neck. This made Afghanistan relevant and important to the neighboring countries, one deserving to be courted with special favors. BIDEN CLAIMS AFGHAN EVACUATION IS GOING SMOOTHLY, AS FOG OF WAR DESCENDS ON KABUL AIRPORT
They now had an interest in getting the US out and forging good relations with the New Taliban(if it were to come to power upon US departure). Also, the New Taliban was more likely to cut deals with Russia, China, Iran, and other nations precisely because it had gotten burned in the US invasion. Even though the New Taliban might feel a rush of hubris in the moment, the major lesson of the long occupation has been the value of humility. Though Afghanistan has been called the graveyard of empires, the fact is empires survived their misguided Afghan ventures. Alexandrian Empire collapsed due to other reasons. British Empire had setbacks in Afghanistan, but it was really brought down by World War I and II. Soviet Empire's collapse had little to do with Afghanistan and more with long bread lines. US empire survived setbacks in Vietnam and Iraq. So, the notion of Afghanistan as the graveyard of empires is a myth. But the fact is the invasions have turned the country into the graveyard for many Afghans. Though Afghan human losses weren't devastating under US occupation, the Taliban was pushed into subsistence in the periphery, and surely their patience was running thin(judging by the eagerness with which they acted to take control of the country upon sensing US withdrawal). 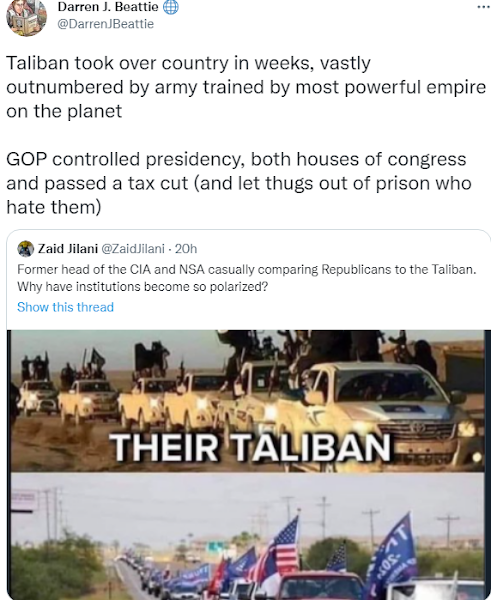 Prior to the US invasion, many in the Taliban were foolish enough to think Allah would save them. Now, they know better. They don't want to do anything to justify another US invasion(or massive aerial attack). And this means isolation isn't an option. They need constructive and mutually beneficial relations with Russia, China, and Iran as insurance against return of US imperialism. It's like the Khmer Rouge wised upon ONLY AFTER the Vietnamese invasion that forced the ultra-xenophobic and ultra-radical group to eat humble pie and adopt the pragmatic path of working with other nations to oust the Vietnamese from Cambodia. In this sense, one could argue that the US invasion and occupation of Afghanistan, though ill-advised and wasteful, may have inadvertently done much good for the country, that is IF the New Taliban learned the proper lessons from the dialectics of history and arrived at a more workable synthesis of diplomacy, commerce, and compromise. THE TALIBAN MEME WAR: TROLLING BIDEN & THE WEST