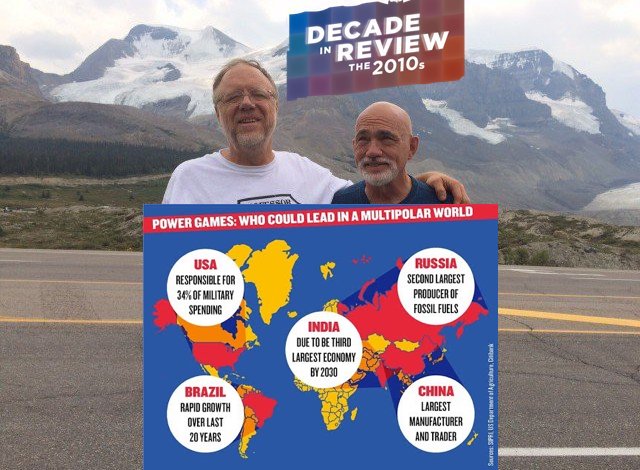 Decline of the US empire? No, US is still the sole superpower. More importantly, the real power isn’t ‘American’ but Jewish Supremacist. US is the main aircraft carrier and money bag of the Empire of Judea(EOJ), and the tentacles of EOJ stretch across many nations in North America, Europe, South America, Middle East, Asia, and Africa, esp South Africa.

If anything, the ‘Americanization’ of the world — which means falling under control of Jewish influence — still gathers pace around the world.

Even when nations supposedly oppose globalism in the name of 'populist globalism', all they do is invite more Diversity and suck up to Jews. Look at Brexit. Leaving the EU has led the UK to take in more darkies and suck up to Jews even more under Boris the Spider Johnson. Clever Jews hedge their bets and have puppets on both sides. So, no matter which side wins, Jews get what they want. Even Donald Trump, though loathed by most Jews, does little but suck up to EOJ. He even works with his Jewish masters to shut down free speech critical of Israel and Jewish supremacism. It's 'muh holocaust' or 'muh gay' all the time. And given that Jews are pushing Jungle Fever and ACOWW(Afro-Colonization of White Wombs), the US as sole superpower is turning into a Soul Superpower at least when it comes to its 'cultural capital' that is mostly about rap music and black-dominated sports.

The US can no longer get what it wants. It has wanted to take back Venezuela for two decades and can’t do it. It wanted the Taliban defeated and eliminated by 2002. It wanted a stable pro-Israel pro-US Iraq by 2004 at the latest. It wanted Iran, the “7th country in 5 years” destroyed (or “regime changed”) by 2006. It wanted Assad out. It wanted North Korea to give up its nukes. It wanted Turkey to stop working with Russia and give up the S-400. It wanted Pakistan to stop tilting toward China. It wanted the Ukronazis to win. It wanted Russia to cave. It wanted to stop Russia from being Europe’s biggest energy supplier. It wanted Chinese economic growth, and the technological and military power it buys, to flatline. And so on.

Meanwhile the other poles of the multipolar world led by Russia, China, and Iran have let the US spend itself into a corner. The dollar is hollowed out and will collapse whenever the other poles want it to. And the big expensive military that killed the dollar can’t even beat backwards tribesmen in places like Yemen and Afghanistan. So the 2020s will undoubtedly witness the US getting less and less of what it wants. The US ability to dictate terms to the world is over.

As for the Zionists, they are just a parasite that sucks whatever blood is available. America’s blood is almost gone. So they will diversify their bloodsucking, and are in fact already doing so.

The US can no longer get what it wants.

But the US never got everything it wanted. During the Cold War, it lost Cuba. And even its successes in Latin America smeared US reputation as it had to support 'right-wing death squads'. US pulled out of Vietnam. US power was at its zenith with the fall of Soviet Empire, but by the end of the 20th century, Vladimir Putin and nationalists were regaining power in Russia. And the Middle East was mostly intact except for Iraq that had been crushed in the Gulf War. (Still, Hussein was in power until 2003.) So, it’s misleading to say the World Order went from US getting everything to US not getting everything. The US never got everything.

But Venezuela is on shaky legs and is far weaker than in the Bush II years when Hugo Chavez was snubbing his nose. Chavez deserves praise as a nationalist, but his version of socialism was deeply flawed as it relied on high oil prices and patronage machine politics. Once oil prices plummeted, so did the economy. The regime in power is weaker than ever and just holding on. Also, US empire pushed back against the Latin National Left with considerable success. Ecuador is now in hands of US stooges. Just ask Julian Assange. Brazil is ruled by pro-Zionist Bolsanaro. Bolivia is now ruled by pro-US junta-backed ‘democracy’. Cuba, though independent, signed onto globo-homo nonsense.

It wanted the Taliban defeated and eliminated by 2002. It wanted a stable pro-Israel pro-US Iraq by 2004 at the latest.

Maybe, maybe not. In a way, the Taliban threat is a useful excuse to continue the US occupation. If the Taliban had really been eradicated, US would no longer have a valid reason to stay. US wants to occupy Afghanistan, not let it go. So, as long as the US has the Taliban Excuse, it stays and gets what it wants, thus encircling both Russia and Iran.

As for Iraq, it was a disaster, but that was good for the Empire of Judea(that rules the US) in a way. After all, a stable democracy in Iraq might still have turned out to be nationalist and pro-Arabist. It’s possible that once the Jewish-run US realized that the Shia-led regime in Iraq would lean toward Iran, it secretly armed and aided Sunni insurgents to attack and subvert the government. Make Arabs fight Arabs. Play both sides. To the extent that new Iraq had been a never-ending story of Arabs killing Arabs, the Empire of Judea loves it. After all, it created the exact same conditions in Libya and Syria. So, in that sense, the ‘disaster’ of Iraq turned out to be a useful formula, a handy template, in dealing with other 'rogue' Arab nations. Don’t invade and turn them into democracies. Just arm and fund certain ‘moderate rebel’ factions and set them loose to turn the Middle East upside down. While Israel is peaceful and prosperous, look at the horrible conditions in Iraq, Libya, and Syria. Total hell on earth. It looks like ‘failure’ but is actually a success to the extent that mayhem among Arabs means more power for Zionists. And Jewish-run US pulled it off with help from treacherous Saudi Arabia and Turkey.

As for Iran, it is reeling more than ever from economic sanctions. Given that Iran is a huge nation, it’s unlikely that the US wants a full-blown war. Rather, it uses financial terrorism and other means to undermine Iran, and they've been very successful. US didn’t topple Assad but got the next best thing. An utterly ruined Syria where US continues to occupy and steal oil. As for Pakistan leaning closer to China, that is the consequence of US growing closer to India, the much bigger prize. Though India is too big for the US to push around, it’s been working with US as bulwark against China-Pakistan. To be sure, the Hindus are clever and play both sides.

It wanted the Ukronazis to win. It wanted Russia to cave. It wanted to stop Russia from being Europe’s biggest energy supplier.

The Ukronazis did win. They are still in power in alliance with Judeo-Nazis. Also, the energy war is just beginning. With the shale revolution, the US aims to export tons of liquid gas to the EU. As for China, who knows what will happen. It’s debt is 3x its GDP. Very troubling.

The dollar is hollowed out and will collapse whenever the other poles want it to. And the big expensive military that killed the dollar can’t even beat backwards tribesmen in places like Yemen and Afghanistan.

But even now, nothing comes close to the power of the dollar. And Chinese economy depends so much on export to the US. In that sense, the US has China by the balls. China relies far more on the US market than the other way around. Also, US military didn’t engage in Yemen. In Afghanistan, it is there to occupy and continues to do so.

So the 2020s will undoubtedly witness the US getting less and less of what it wants.

But the US is still the #1 destination for smart people around the world. Concentration of brain power will determine much of the future. They are coming to NY, LA, and San Fran to serve the US in its high-tech domination. Immigration is mass treason(except for Jews who control what it means to be 'Pro-American', which today is invariably Pro-Jewish-Supremacist-and-Zionist). Hindus, Muslims, Chinese, Russians, and etc. come to the US to make money and to serve the Empire of Judea, often against their own kind. Palestinians in the US pay taxes that go to support Israel’s oppression of Palestinians.

As for the Zionists, they are just a parasite that sucks whatever blood is available.

The problem is Jews are para-hosts. Yes, Jewish power is parasitic and sucks blood, as in the 2008 bank bailouts. But Jewish Smarts do create lots of new enterprise and money, and goyim(esp politicians) suck on Jewish money as craven dependents. Jews are not like the Sicilian-Americans in GOODFELLAS who are purely parasitic or like Gypsies who only steal. Jews do a lot of bad shit but are also at the front-line of creating the new world of technology and markets. Thus, too many goyim have grown dependent on Jewish money-making. They suck the blood of Jews who suck on the blood of goyim. Jews suck but are also sucked upon. Thus, they are more than parasites. They also serve as hosts, or parahosts.
at December 31, 2019