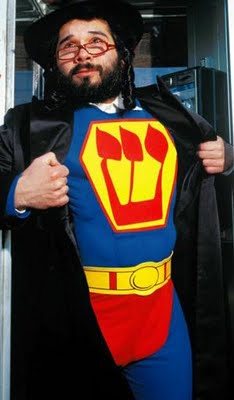 Irving never directly addresses in either book the Holocaust. He does document the massacre of many Jews, but the picture that emerges from the factual evidence is that the holocaust of Jewish people was different from the official Zionist story.

One of the problems of Holocaust Remembrance(akin to Holocaust Worship, which leads to Worship of Jews) is that it 'esoterically' carries the seeds of Judeo-Nazism. In other words, it is supremacist, or yet another form of supremacism even as it denounces the 'master race' supremacism of Nazism. The rites and rituals of Holocaust Remembrance aren't really about the evil of mass murder, six million dead, or a people being targeted for mass extermination. It's really about the outrage that it was done to JEWS. The moral logic would suggest that Jews are the superior race, the true master race, the holy race. Therefore, the real crime of the Holocaust was that a false wanna-be master race(the Teutons) dared to mass murder the true master race, the Jews. In remembrance, what we hear is not the outrage of killing 6 million people(though some analyses point to numbers closer to 3 million) but 6 million JEWS. So, the real abomination of Nazi Criminality was that it targeted Holy Jews than mere humans. One gets the sense that the Holocaust wouldn't have been deemed so evil and unforgettable/unforgivable IF Nazi Germans and their collaborators had killed another people while sparing Jews. Abe Foxman was once recorded admonishing Ukrainian leaders NOT to conflate the 'Holodomor' with the Holocaust. The Shoah is a jealous god, and 'thou shall not worship no tragedy before(or alongside) it'. If Jews really regarded the Holocaust as a crime against Humanity, they would welcome comparisons of Jewish suffering in the Shoah with the sufferings of rest of humanity in similar tragedies. But Jews insist on maintaining the singularity of the Shoah because the victims weren't merely human but JEWS. Now, it's understandable why a people would be more upset with their own dead. After all, Armenians are more upset over what the Turks did. Chinese are more sensitive about the Nanking Massacre. The difference is that Jews don't merely grieve over their own dead among themselves but try to force all the world to feel that the Shoah was worse than any other tragedy because it was done to JEWS. Indeed, Jews want goyim to believe that suffering of Jews is worse than even the suffering of their own goy kind. Whites, it seems, have truly bought into this. They are so obsessed with protecting a single hair on a Jewish child in Israel but turn a blind eye to the grisly deaths of thousands of whites in South Africa(because whites expressing white identity will displease the holy Jews). As long as the super-rich Jewish diamond industrialists can rake in billions by bribing the black-run government, who cares if white gentiles get slaughtered on farms?

The 20th century has seen lots of bloodshed and mayhem. But most mass-killings have been forgotten, ignored, or suppressed. Even rationalized. Many will argue that the Holocaust was especially evil because it wasn't just mass-killing but a targeted genocide of a specific people. Fair enough. Still, one can't help but feel that the real outrage is over murder of JEWS than murder of mere people, the goyim. Suppose millions of Jews had died not by targeted genocide but by a broader movement, like forced collectivization in the USSR. Suppose a political campaign ended up killing millions of Jews by famine and starvation than by extermination squads. Would the deaths of those millions of Jews be mostly ignored like the deaths of millions of Ukrainians or Chinese(under communism)? I think not. The reason why Jews are far less harsh on communism is because most Jews greatly benefited in the USSR just when millions of Slavic Christians were being dispossessed and killed by starvation. It was good for Jews, and the victims were goyim. And do Jews feel even a smidgen of remorse or conscience about what they did in Russia in the 90s? Most Jews don't. If anything, they even make alliances with Neo-Nazi elements in Ukraine to undermine and eventually take over Russia, as if it belongs to them as well. Jews kvetch about one dead Jew in Israel but show NO feelings about countless dead Muslims resulting from Wars for Israel.

The 'moral' logic of Holocaust Remembrance is like that of Globo-Homo-Mania. Initially, the 'gay' agenda was sold as freedom for homosexuals. We didn't have to approve them or welcome them. It was based on the scientific truth that some people are born with homo tendencies, and it's not their fault. Also, as people have feelings, it's not good to insult and harm homosexuals. Just let them be. And most Americans went along with this. But, it soon turned out that this GloboHomo business wasn't just about tolerance of deviancy and freedom for perverts but a supremacist idolatry of homos(and even trannies) as an angel-like special people whom we must feel compelled to celebrate, praise, lionize, and rhapsodize over. As for those who refuse to do so and call out on the true nature of the 'gay' agenda, they are to be deemed as 'homophobic', or sick in the head and unfit to reach upper ranks of society where all the goodies are. Even a huge chain like Chick-Fil-A is to be denied access to cities like Chicago where mass celebrations of Anno Sodomini takes place annually. Apparently, Dick-Fill-Ass is what the US is really about.

Both Holocaust Remembrance and Globo-Homo have been sold as being about justice, equality, and anti-supremacism, but both are actually predicated on the supremacist notion that Jews and homos(their main allies and most tireless globalist agents) are special and deserve praise, adulation, and obedience above and beyond all other peoples. Clever Jews have coated the poison pill of Jewish supremacism with anti-supremacist sweetener. In the mouth, it tastes like 'equality and justice' but dissolves in the stomach to spread mindless support of Jewish Supremacism. At AIPAC rallies, Jews and cucks make big speeches about 'Never Again' and 'No to Hate', all the while pledging undying support for Zionist tyranny against Palestinians, Wars for Israel, mindless hatred against Iran, and defamation of whites who insist on having an identity emancipated from the clutches of the Shylock Doctrine.

Jews could have used Holocaust Remembrance to learn and teach a greater lesson for all mankind. It could have been about how it's wrong for ANY would-be supremacists to wipe out another people. Alas, the lesson has become just another form of Supremacism, i.e. we need to remember the Holocaust forever and ever because the victims were JEWS, the holy and superior race. The lesson became selective than universal.
Even the Jewish-controlled Narrative of the US is about "Is it good for Jews?" Jews say Immigration was noble because it was great for their own kind. But didn't Immigration of Europeans and Jews lead to the 'genocide' of native indigenous folks? Didn't Jewish Hollywood make tons of Westerns lionizing the white pioneers who rubbed out the Indians? Didn't immigration lead to Nakba Pogroms that wiped Palestine off the map? Never mind all that. Too inconvenient for the Judeo-centric Narrative.
Jews say they are for universal principles and reach for a global audience on that basis, but their ultimate message isn't "equal justice for all humans" but "all humans must agree to praise, worship, and serve Jews and furthermore ensure that all the world will be good for Jews". Jews are not surrendering to universalism but exploiting its reach to make humans serve Jews as the god-race.

But then, the very notion of Jewishness is essentially supremacist as it's based on the conviction that the one true God chose Jews to be masters over all humanity. Indeed, when so-called progressive Jews cling to Jewishness, they are sticking to an exclusionary identity-ideology that says Jews are special and more blessed than others. Even among secular Jews, this mental habit seems to remain. Some Jews argue that Jewishness is about Jews minding their own business and demanding to be left alone by goy bigots. But Jewishness isn't like being Amish, a culture that really just wants to be left alone. Jewishness is about Jews excluding goyim from their own world but making all the goy world include Jewish Power as the righteous master and ruler over all of humanity. It is a mad contradiction, a psycho-political dilemma at the root of the world's biggest problems and conflicts.

If Holocaust Remembrance really has a universal lesson to impart, it should be that ANY PEOPLE can act like Nazis and ANY PEOPLE can end up like Jewish victims. If the message is truly anti-supremacist, then no people are innately nobler than others & no people are innately more wicked than others. Germans who were once Nazis could suffer like Jews did under Nazi tyranny. Jews, who were once victimized, could become like Nazis and terrorize the world. In other words, any people, even Germans, could become 'Jews' in the metaphorical sense, and any people, even Jews, could become 'Nazis' in the metaphorical sense. But according to Holocaust Remembrance, we are to fixate on Jews as the Eternal Victims no matter what they do in the future. Such Moral Privilege is a form of supremacism. It implies that even if Jews were to act like Nazis, they shall always be morally shielded with the Anne Frank card. And even when Germans face replacement and extinction, they are to be regarded as 'Nazis' forever. This is crazy, and the Holocaust is now just a Holo-Curse.
at May 17, 2019