How Might the US end the sanctions against Cuba while satisfying the Cuban-American community in Florida? — Cuba's tragedy was choosing Communism than Fascism against US Gangster-Capitalism and CIA deep state shenanigans 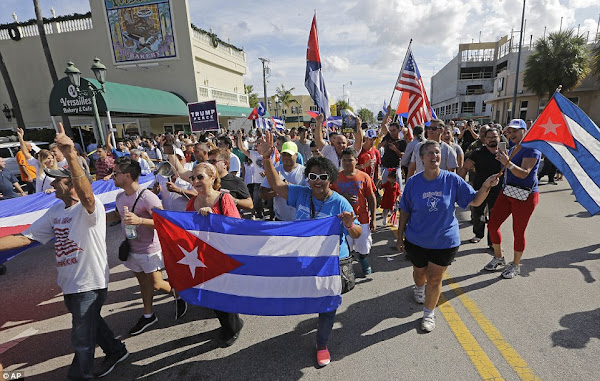 It makes little sense to blame Joe Biden(or his predecessors) for America's outdated Cold-War-era policy toward Cuba(but then, the crazy US seems to insist on Russia as the bogeyman in a 'new cold war'). Biden is just a senile puppet of the Jews. Indeed, he is perfect exemplar of what has become of the White Goy Elites. They are little pimps serving the Jewish mafia dons. This latest Cuban business is all about Florida. Donald Trump won Florida decisively in 2020 because he played on the Cuban vote. Apparently, Obama's semi-conciliatory policy toward Cuba rubbed off badly on many Cubanos. As Florida is a key swing state, it's mostly a matter of electoral politics. True, Cuba, as an ally of Venezuela, which in turn has warm relations with Iran, has upset many Jewish hegemonists who cannot tolerate anything that defies, directly or indirectly, Zion.

What is to be done about this? Cold War is long over, and US should stop with the sanctions against Cuba. But both political parties play to the Cuban-American vote which is most decisive in Florida. Is there any viable solution? I think there is, something akin to the Indian Casino Policy. Casinos were allowed to proliferate all across the fruited plains on the basis of their reparatory benefit to Indians. Personally, I think it was a bad idea to expand casinos as gambling is theft and invariably Jews will skim off the casinos as the 'Injuns' are too ill-educated and backward to run the daily operations, but that's neither here nor there.
Anyway, there might be a way to sweeten the bitter pill of ending the anti-Cuban sanctions for Cuban-Americans. How about, for the next fifty years, all the (or at least 50% of) business between US and Cuba must be through the Cuban-American community? Lots of money to be made by Cuban-Americans, and 'greed' alone might persuade the Cubans in Florida to take the deal. Just like Indians got a sweet deal with the casinos, give Cuban-Americans an extra-sweet deal in the prospect of ending sanctions. All or much of the selling to Cuba must be done through Cuban-American businesses. And Cuban goods must be brought to the US via Cuban-American owned companies. That might be a win-win for both those who want the sanctions to end and the Cuban-American community that figures to cash in on doing business with the devil.
It could be called THE WILD BUNCH solution. In one scene, the young Mexican bandit Angel refuses to go along on the train heist but changes his mind on condition that he could take one case of rifles and one case of ammo. Angel did it for his village at the cost of his share of gold, but gold is what usually mints the deal. It's like the guy in STATE AND MAIN. Jews gave him money, and he just goes along.

Cornel West says that most of his black colleagues failed to back him because they are afraid of Jews. He'd be closer to the mark in telling them, "Jews gave you money." If not Jews, then super-rich oligeeks like Jeff Bezos in cahoots with Zionists. He gave $100 million to Vance Jones the 'communist'. You can bet Jones won't make much fuss about super-capitalism or Zionism; he will just spout off about those 'white supremacist' truckers and opioid-addicts. If commerce can buy commies, it sure can buy Cubanos in America into accepting the end of sanctions on Cuba. For all their principled protestation against Castroite Tyranny and Communist Evil, they will sing another tune when ending-sanctions comes to mean mucho dinero for the Cuban-American community. Mormons want to invest in Cuba? They have to go through the Cuban-American community. Jews want to invest in Cuba? They need Cuban-American contacts. Hindus and Chinese-Americans want to invest in Cuba? Call you local Cubano. (Of course, Jews will be one exception. More than Cubans, they own Florida and there's no way Cuban-Americans are going to say NO to anything Jews demand.) 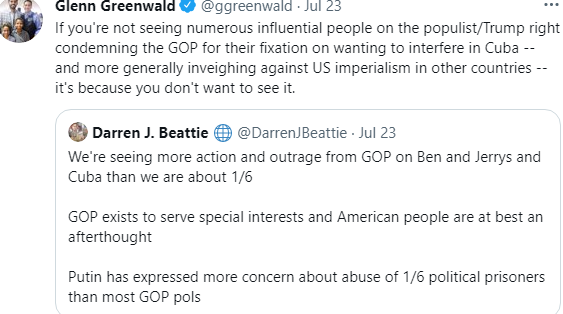 While the continuation of sanctions after the Cold War made little sense, the Left hasn't made much sense either. On the one hand, they say US and capitalism are all about exploitation and piggery. If so, shouldn't Communist Cuba be blessed for not having economic relations with the capitalist Yanqui US? And yet, the very communistas or socialistas, who condemn the US and capitalism, argue for economic ties and trade between Cuba and the capitalist US. Why is this? It seems capitalism works a helluva lot better than communism or radical socialism. And even social-democracy needs a vital capitalist base that produces goods and wealth that can sustain a degree of socialism. Communism was bound to fail because it's like City Hall running everything. Imagine if your city hall or town hall had to run all the hotels, restaurants, health clubs, boutiques, markets, auto-shops, drug stores, computer stores, electronics services, and etc. There's no way it would be efficient.

Granted, it's understandable why Cuba turned against capitalism. Its variant in Cuba was associated with old oligarchy, the mafia, CIA shenanigans, Jewish bankers, and all-around US-meddling. Cuba was turned into something like Disney Land for the hedonists, degenerates, hoodlums, goons, and imperialists. In that, Fidel Castro and his men did achieve something heroic. And it's understandable why Cuban Independence couldn't allow 'liberal democracy' and 'free trade'. So-called Liberal Democracy is really rule by money. US-funded or US-associated Cubans(as puppets) would have gained control of all media and institutions, and the 'democratic' politicians would have been shills like Marco Rubio. The Yeltsin-Russia of the 1990s was proof that 'liberal democracy' is bound to fail when rich and powerful foreign forces meddle in domestic affairs. Russians weren't allowed to develop and shape their own democracy but had to live under one imposed by World Jewry that protected Jewish gangsterism and fostered Russian cuck-compradors. To this day, Vladimir Putin hasn't done enough to remove this poison. (Jewish media always play up sensational stories about Russia poisoning this person or that person, but Jewish Power poisons entire nations with financial blood-sucking, globo-homo degeneracy, and socio-cultural destabilization.)To the extent that Fidel Castro created an independent Cuba, he did good for his country. 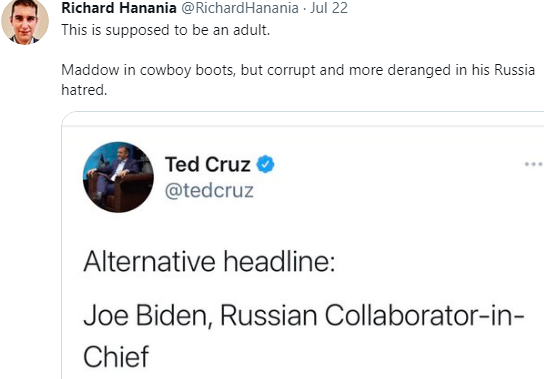 Where he failed was in adopting communism than fascism. Now, given the negative connotations of the term, it wouldn't have made sense to call any system 'fascist'. But one can have fascism with a different name. Look at current Israel, Russia, and China. They are closest to the fascist model. Israel and Russia are democracies but, especially in Israel, there is a higher principle than mere 'liberality' or 'individualism'. The core political theme of Israel is Jewishness, Jewish state, Jewish identity, Jewish culture, Jewish unity, Jewish survival, and Jewish power. Where Zionism went wrong was it turned imperialist and morphed into Yinon-ism, but Zionism, at least as a limited nationalism, is far more viable than the so-called 'liberal democratic' model of the US, Canada, and EU, now in disarray because its central emphasis on 'individuality' and 'liberality' prevent those systems from emphasizing the core themes of ethnos, territory, and heritage — with the rise of Political Correctness, 'Wokeness', and Censchwarzship, the so-called Liberal West is even losing freedoms and rights once associated with individual liberty and conscience. (The only racial/cultural identity and nationalism that white people are allowed to express is their gushing and undying support for Jewish People and Israel.) Another problem with 'liberal democracy' is the super-rich end up controlling everything. Worse, as businessmen tend to be shallow/hollow, they come under the influence of rasputin-like charlatans. Look at the US today. Consider the super-rich hollow/shallow jerks like Jeff Bezos, Warren Buffett, Bill Gates, and the like. Sure, they are smart people but have nothing on their minds but making money. So, to burnish their credentials as Good, Committed, and Important People, they consult the 'leading' 'intellectuals' and 'activists' who are either crazy, cynical, delusional, and/or opportunistic. (If Jewish-controlled media promote Kendi X as the guru of the moment, all these rich fools are slobbering all over him and the like. Jews do control the gods.)

Then, 'woke capital' makes perfect sense. These shallow rich people are smart enough to make money but shallow/hollow about everything else. Out of fear, anxiety, and/or desire for approval, they latch onto the latest fads and fashions foisted by the 'intellectual' class ensconced in the elite institutions of media and academia, both of which are controlled by Jews. To be sure, in a paradoxical way, the current West is profoundly ultra-nationalist precisely because it is so extremely anti-nationalist, i.e. in the interest of "Is it good for Jews"-based ultra-nationalism, all vestiges of white nationalism must be expunged. Jews suppress nationalism among whites not as a general anti-nationalist principle but to bolster and secure their own nationalism-imperialism, much like the British suppressed Indian Nationalism to maintain British national-imperialist rule over India.

This is why a secure and healthy system must be fascist. Mao Zedong was nutty in many ways, but he was sensible about how Politics must command Economics. As a young man, he'd seen how so many business-minded Chinese were willing to sell out their nation for personal profits in association with imperialists. He didn't want China to become one big Hong Kong. And Castro understood this as well as he grew up in a Cuba dominated by US gangster-capitalism. What the capitalists couldn't do in the US(which has some rules and regulations), they did in Cuba as if the island-nation was little more than one big Red-Light District for Ugly Americans.
Where both Mao and Castro failed was in throwing out the baby with the bathwater. Instead of working to develop national capital, they waged total war on capital and enterprise, thus depriving their nations of incentives and innovations necessary for a modern economy. But China since Deng's reforms understood this. It followed in the footsteps of Japan and the so-called Asian Tigers, and then, Vietnam followed as well. Though China and Vietnam lagged behind in economic growth, they had one advantage. They created systems where Political Power would control Economic Power, whereas Japan and the 'Asian Tigers'(especially with the advent of 'liberal democracy') became all about corporate dominance. Just like shallow/hollow business class of the West, the ones in Japan now promote jungle fever and ones in Taiwan & South Korea promote tranny craziness and globo-homo nonsense. Businessmen are soulless and, if allowed to rule, will just take cues from charlatans drawn from the so-called 'intellectual' class. (What passes for intellectualism in a world defined by Popular Culture is mostly junk. Idolatry over Ideology.) And in our post-religious age where so many are hungry for spiritual meaning, the cult of vanity and narcissism(especially of Negroes and Homos) is provided for the pop-culture and political-correctness addled masses. Fascism provides a Moses-like prophetic figure to counter-balance the excessive influence of the Golden-Calfers. How the history of Cuba could have been different if Castro had chosen a fascist than a communist path. He could have had a far healthier economy with elements of capitalism and socialism, both bound to nationalism and sovereignty. 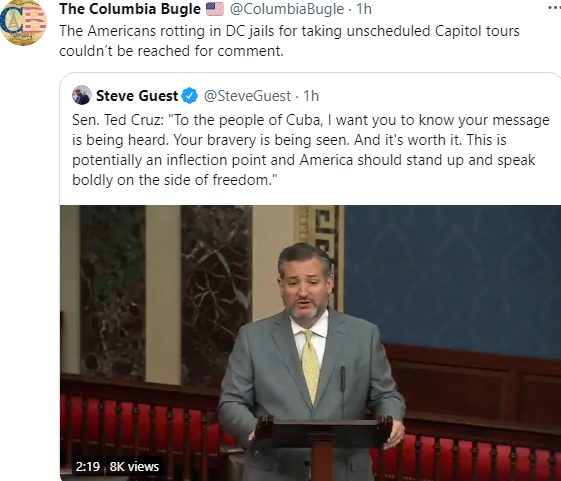 Of course, there is the black problem in Cuba. Though no one wants to live in a police state, Cuba has done better with its black problem because blacks have a tendency to abuse freedom and go wild. While a police state suppresses a lot of good freedom, it also clamps down on bad freedom, and so, the black problem never got to the level of Brazil or Venezuela. Still, Cuba suffers from TMB or Too-Many-Blacks, and the liberalization of society may turn parts of like the favelos of Brazil or the hellholes of South Africa & Haiti.