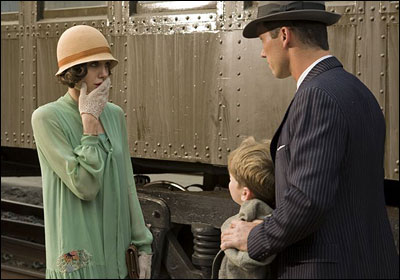 Congressman Steve King said the West cannot preserve its cultural legacy with somebody else’s babies or children. Europeans and European-Americans are members of a racial-cultural-historical family. They are unique and not replaceable by other peoples.

King's sentiments are not unlike the dramatic tension in THE CHANGELING, the movie by J. Michael Straczynski & Clint Eastwood.

In the movie, a mother’s child goes missing, and he is replaced with another boy who is not her son. She insists the kid isn't hers, and naturally she's unwilling to pretend that her real child has been restored. She can't pretend that this new kid(who is not her real son) is as dear to her as her real child. But the INSTITUTIONS demand that she accept the kid as ‘hers’. If not, she will be deemed sick in the head and treated accordingly.

What we are seeing with mass-migration-invasion in the West is THE CHANGELING on a massive scale. It is mass-replacement of a people with a new one that pretends to be the real thing. It's worse than the INVASION OF THE BODY SNATCHERS.

All these non-white invaders are changelings. They are to invade the West and replace Europeans, but Europeans are supposed to welcome and embrace these usurpers as their own, as suitable and even rightful replacements for native Europeans. The ‘new Europeans’.

The Changeling Phenomenon is happening both physically and culturally.

So, if a man says he is a woman, he is a ‘she’ who can take the place of a woman on a women's sports team. He is to be regarded as a 'woman' and replace a real woman. If women complain that he is not a real woman, they are denounced as 'intolerant' and 'hateful'.

Even Rachel Dolezal got into the changeling act and pretends to be ‘black’.

Homomania replaced Christianity as a neo-religion or 'neoligion' that's supposed to fill people's hearts with rapture. MLK or Mandela is the replacement for Jesus.

Fantasy is the new reality.

It used to be that reality was the center of life, and fantasy/imagination was appreciated as extra-mental-activity adding color and escapism. But now, fantasy isn’t merely an addition to reality but the changeling to supersede reality itself. So, we are to believe some Meso-American indicted on murder charges is a ‘they’. http://www.unz.com/isteve/pablo-gomez-jr-is-suspected-of-homicide-but-they-deserve-to-be-known-by-the-gender-pronoun-they-prefer/

We are to accept 50 genders(maybe more) as replacement for two sexes. We are to believe the new Russia(that wants peace) is a bigger menace than the old Soviet Union in a New Cold War. We are to believe homosexuality is just as normal and useful as real sexuality.

We are beyond fake news. We live in the world of Fantasy News. When fantasy replaces reality as the fulcrum of culture, we can be led to believe just about anything. A warped habit of mind has a way of corrupting cognition and poisoning perception. Normal cognition feeds on honest perception. It assesses truth based on what is seen, heard, and felt of the real world. But PC injects the cognitive faculty with fantastical notions, and resultant ideological hallucinations distort even honest perceptions that are misread. When cognition is contaminated with the notion that 'gender is fluid', even someone who is obviously a man pretending to be a woman is seen as a real 'woman'.

It used to be that we understood the truth of life and how it is created. There is real sexuality, and from that comes life, but there are also organic deviations from the genetic norm, such as homosexuality.
Sane people can accept homosexuality as a minority deviance from real sexuality.
It is an odd branch that sprouts from the tree of real sexuality. But now, we are to believe that this deviant branch is as good or even better than the Core Tree... or that IT is the core tree.

Once the Changeling Syndrome takes effect, people get into the habit of believing that anything is replaceable with something else. It’s a habit of mind that trivializes and corrupts everything.
at September 25, 2018