The Lesson of Anti-White Madness on the 50th Anniversary of Moon Landing(made possible by the white race) — Whites must have Give-and-Take relationship with the Other, but Jewish Power set the Take-and-Take Template that Other Groups are now emulating — Why Jewish Globalist-Imperialists are like the Aryan-Brahmins who ruled India for 1,000s of years 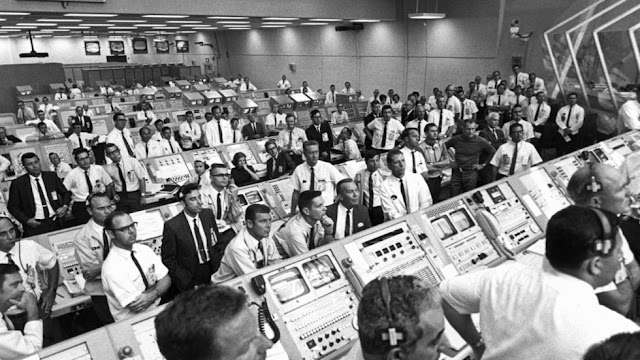 From Russia Today:
Attempts to diminish the triumph of Apollo 11 and to reassign credit don’t just taint the 50th anniversary of the moon landing, but presage the technological decline of the US if it persists with identity politics. With the Founding Fathers now rarely mentioned in the media without side notes about their slave ownership, and the Betsy Ross flag offensive to Colin Kaepernick and Nike, there is nothing new about liberal attempts to strike at the very heart of American identity. But – leaving aside the conspiracy theorists – the moment Neil Armstrong stepped on the surface of the Moon on July 20, 1969 was objectively such a universal milestone that to qualify it seems a fight against human endeavor itself. It would seem like the more logical route, for those who resent that this was a feat of white un-woke America, would be to try and diminish their role in favour of supposedly unsung heroes. HIDDEN FIGURES, the Oscar-winning film from 2016 was the perfect archetype of this revisionist history, exaggerating and fictionalizing the role of a cadre of politically suitable black women, who did an entirely replaceable job and were no more important than thousands of others involved.
This just goes to show that white give-and-give policy urged by Jews proved to be utterly destructive to America.

Naturally, the world should operate on the basis of give-and-take: Whites give but also take & Non-whites take but also give. But with Jewish ascendancy in the US, they pushed a take-and-take policy for themselves while enforcing give-and-give policy on whites. And whites fell for this. By groaning about 'antisemitism', Jews insisted that they could criticize and shit on others but OTHERS, esp whites, cannot criticize and shit on Jews. When Israel pulled the infamous USS Liberty Attack, it was a clear case of take-and-take on the part of Jews. They not only got away with bloody murder but pushed the US into a defensive and accommodating position of weakness. No apology from Israel. No admittance of guilt. Instead, white America had to swallow its pride and just go along with Jewish BS that it was all just an innocent mistake, nothing more to see folks, so just move along. 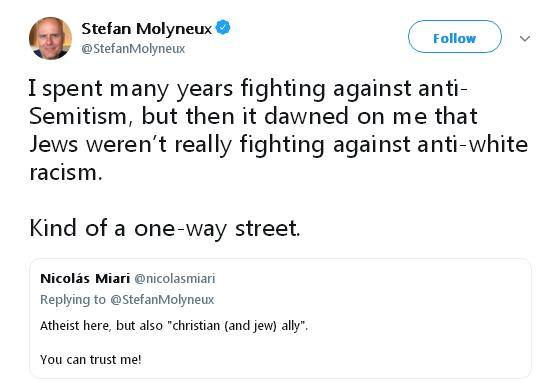 At some point in US history, conscientious(and affluent) White America sought a give-and-take understanding & compromise with non-whites. For example, White America would learn to 'give' by admitting to blacks that slavery was wrong in the Land of the Free. But White America also insisted on the 'take' from black America. Blacks would have to admit that, despite their tragic history in the US, they also made great gains and attained opportunities non-existent for blacks who remained in ugabuga Africa. Despite their suffering, blacks did gain a foothold in the most advanced nation on Earth fated for great things.
Same give-and-take understanding developed between whites and American Indians. True, whites would admit that American Indians lost their sacred hunting grounds to the white invaders. But Indians would also admit that whites built a civilization that Indians could not have on their own. So, neither whites nor non-whites monopolized all the righteousness.
Whites were willing to 'give' more on the basis of reciprocity. If whites offered more(in material or moral concessions), non-whites would appreciate the gesture of 'give' on the part of whites. They wouldn't just 'take' but 'give' back to whites an acknowledgement that whites were sincerely trying to redress past wrongs, therefore urging both sides to bury the hatchet and learn to live together. The best example of such give-and-take sentiments was when Japanese-Americans who lost property during World War II were offered an apology and financial compensation. It was done more in the spirit of national healing than righteous indignation.

But Jews didn't play by this game. They were into take-and-take mode. They made demands on whites but never gave an inch to whites. Jews never admitted their role in Western Imperialism and slave trade. Their role in communism and organized crime. Their role in corruption and espionage, such as slipping Josef Stalin the secrets to the Bomb. They made demands on White America to support Zionism without ever saying 'thank you'. But then, why should whites have expected much in the way of conscience among Jews when most Jews, 'liberal' or 'conservative', have expressed zero conscience about what they'd done to Palestinians(and Ukrainians in the 'Holodomor'). Jews used take-and-take with Palestinians, and if White America were smart, it would have woken up to the possibility that Jews would come to regard White America as the Next Palestine with Whites as the 'Next Palestinians' and non-white mass-invaders as the invasive proxies of Jewish Globalists.
Granted, Jews made great contributions to America in fields of science, medicine, technology, and etc, but most such achievements were to increase Jewish power and influence than serve All America, white or non-white, as a whole. Consider the sheer concentration of power and wealth in Jewish hands esp since the 60s. It's the result of Tribalesse Oblige. 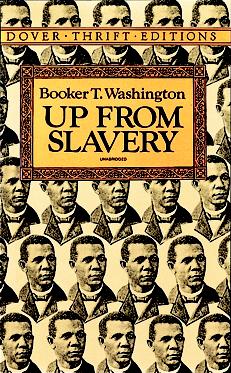 Because whites submitted to give-and-give mode in relation to take-and-take Jews, such has become the New Template for all other groups who've decided to learn from and copy the Jews, the most powerful people in the world. Booker T. Washington was a give-and-take Righteous Negro when he wrote the book UP FROM SLAVERY. Even while reminding whites of slavery's injustice, he acknowledged the opportunities and freedoms opened up to blacks as the result of the contact between white world and black world. He called upon whites to do more for blacks but also insisted upon blacks to make the most of the freedoms availed to them. Thus, reality was not a matter of absolute right and absolute wrong, of total white and total black. Indeed, such was also the attitude of victorious Northern whites over Southern whites after the Civil War. Even as the Northern Yankees pushed their own righteous narrative of preserving the Union and ending slavery, they also conceded that many Southern men fought with bravery, honor, and own sense of loyalty.

Blacks were always problematic, but they learned the take-and-take attitude from Jews. And now, many other groups are copping the same attitude(as they can't help noticing take-and-take Jews got so much from whites). We see it among Hindus, Mexicans and Guatemalans, Muslims, and etc. Their rabid and virulent anti-whiteness was learned from the behavior of a certain group, and it was mainly the Jews. And Jews concocted such attitude not to combat injustice and promote equality but to weaken whiteness as a rival power so that Jewish Power would reign supreme. After all, isn't it odd that, even as the mass demographics of America grows more diverse, the elite 'oligraphics' of America grows more Jewish-supremacist by the day(though the full extent of this is shrouded by the fact of Globo-Homo as proxy of Jewish power)?

It's not a given that blacks should be so utterly nasty. Look at Cuba, a nation with history of slavery even more extensive than the US on a per capita basis. But Cuban elites, even or especially under communism, fixed the Narrative so that black Cubans have been made to regard their relationship with whites on a give-and-take basis. Blacks take the narrative of their 'noble suffering under slavery' but also concede that they gained much from the white way and white rule, especially under the Castros. Such black-and-white understanding used to be the arrangement in the US as well, but Jews took over and decided to totally shame whiteness as a special kind of evil so that whites must never take and instead only give-and-give and always concede to the Other. Granted, there are waivers as when whites are encouraged to hate and kill Muslims OVER THERE as the enemies of Holy Israel. When white soldiers drop bombs on Muslims OVER THERE, they are 'heroes' according to Jews. But once the Muslims come OVER HERE, Jews goad them to join the POC brigade and dump on Evil Whitey(the relatives of the white soldiers fighting in Muslim lands) as the source of all problems.

Nothing real is possible until whites finally square things with Jews. No more give-and-give with Jews. The only decent terms between Jews and whites should be give-and-take for both sides. If Jews insist on take-and-take stance vis-a-vis whites(as they've done with Palestinians), whites should fight back in kind by going into take-and-take mode against Jews. And if Jews dig up dirt on evil white history, whites should do likewise and show how Jews ran the finance of Southern Slavery, how Jews colluded with Communist Russia, and myriad other crimes of Jews. And whites should deconstruct Jewishness as a supremacist social construct that says Jews are the favored and chosen of all the human races, i.e. 'Jewish Supremacism' is a redundancy because Jewishness itself is a supremacism.

Now, neither side needs to be so nasty and hostile, but IF Jews insist on playing a virulently anti-white game, white people have no choice but to fight fire with fire... if they are to survive as a race and regain pride(that of late has been associated with homo fecal-penetration and tranny penis-cutting thanks to Jewish-controlled media and deep state). If Jews won't give but only take and take, whites must do likewise with Jews. Never given an inch to those who won't give it themselves.

As for white domination of the space program in both Russia and the US, it's a historical fact that whites were far ahead of rest of mankind in science and technology. That's a historical fact, not a matter of historical injustice. It's like there were lots of Jewish nuclear-physicists because many brilliant Jews went into such field. Things may change in the coming years, especially with rise of Chinese and Hindu scientists and engineers, though given IQ differences among groups, it's difficult to imagine blacks will be dominant in those fields. On the other hand, blacks dominate many sports because they have natural advantages in stronger bones, fast-twitch muscles, and other factors. A film like THE RIGHT STUFF(directed by Jewish Philip Kaufman based on book by Wasp Tom Wolfe) had no problem with the whiteness of the American air and space program, but that was still a time before the US was totally taken over by mean-spirited Jews and mentally diseased with PC nonsense that has turned so much of media and academia into Oleannaville.