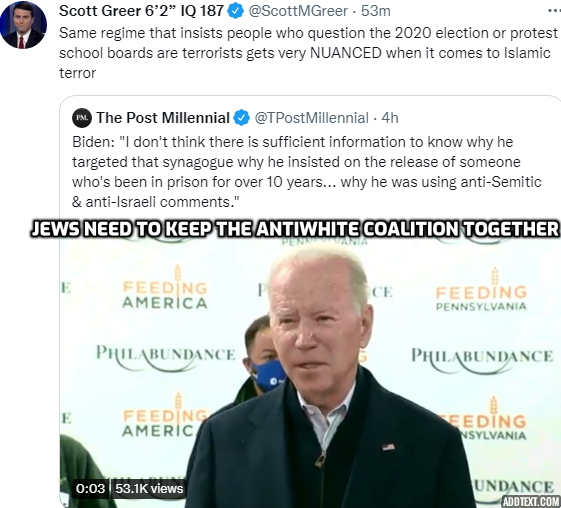 Colin Flaherty did great work in reporting on the epidemic of black crime, but alas, he was just another useless ‘boomer’. He would usually ban any commenter on the Jewish Question or denounce anyone as ‘Anti-Semite’ who noticed the obvious. His page on minds.com was especially censorious.

Stuff like BLM(or Black Lives Matter) isn’t really about blacks. It’s about whites. Jews don’t care about black lives, anymore than they care about Palestinian or Iranian or Russian lives. Indeed, if the world had no white people, would Jews push BLM? Of course not.

It really boils down to the formula: Black Lives Matter = White Obedience Matters. Or, BLM = WOM.

White Obedience Matters to what or whom? To Jewish Supremacist Power. How can Jews maintain White Obedience? By White Guilt and White Shame, which fosters to White Submission and White Hope for Redemption.
Jews used the Holocaust Card, and it’s been very effective in Europe but less so in the US with its triumphalist pride of ‘We beat the Nazis!’ So, against white Americans, Jews use the Black Card. Again, it’s not because Jews care about black lives. Jews promoted gangster rap that encouraged violence in the black community, leading to more deaths. Jews pushed all manner of social licentiousness that led to family break down, which has been especially devastating to blacks. Also, it was Jewish Power decided to lock up record number of blacks beginning with Bill Clinton when 'inner-city' pathologies were threatening to undermine big cities and boost support for White Conservatism.

BLM is really just a tool directed at whites because Jews fear worsening conditions will begin to awaken white consciousness in search of autonomy from Jewish Authority. Jews fear white awakening like Catholic Church feared the rise of Protestantism, like the British Empire feared the awakening of Indian National Independence Movement. 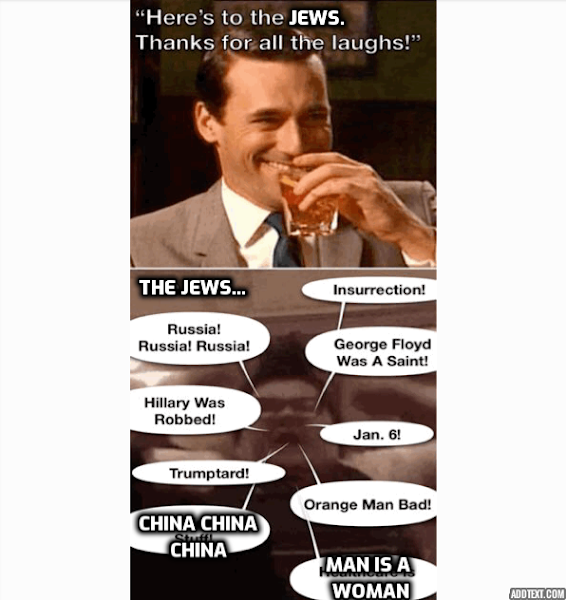 Jews have been disadvantaged in Russia because they don’t have something comparable to guilt-bait Russians with. Sure, there’s the thing about pogroms, but Russians can fire back and point to Jewish role in communism that killed many more lives. Besides, Russians were the main destroyers of Nazi Germany. So, if anything, Jews owe the Russians. And besides, Russians remember what was done to their country in the 1990s by Jewish 'oligarchs'. (Furthermore, as Russian sports and popular culture are dominated by national folks, Russians are less enamored of the Other as 'heroes' and 'idols', whereas white Americans have come to idolize blackness in sports and music. No wonder then that Jews can manipulate white feelings about blacks.)

At any rate, Jewish Power ultimately depends on control of White Americans. Jews feel they must control the gods that decide what is sacred or profane in the US. This is absolutely crucial because it’s the sacraments and taboos that decide the character of a civilization. Power and wealth aren’t enough. After all, we can badmouth Bill Gates even though he’s super-rich. We can insult Elon Musk and Jeff Bezos. We can also put down Mark Zuckerberg as a billionaire geek but never ever as a, guess what? A Jew!
So, being rich isn’t sacred in the West. Wealth can be attacked, and rich people can be mocked. But being Jewish is sacred. Indeed, putting down a super-rich oligarch is less dangerous than putting down a Jewish plumber. If a politician impugned a super-rich hedge-fund shark or Big Tech oligeek as a greedy a-hole, his career will remain intact. But if he muttered something negative about the ethnic traits of a Jewish non-entity, he would be in Big Trouble. It’s like the FBI and Justice Department can go after someone for being rich and corrupt but better not touch anyone or anything associated with Jewishness. So, Ghislaine Maxwell has been convicted of sex charges but shhhhhhh about her Israeli-Jewish connections.
Jewishness is like the Kim Clan in North Korea. As long as Jews control the gods in the West, Jewishness is sacrosanct. And in order to control and subdue whites, Jews also made blackness sacrosanct. Again, it’s not because Jews care about blacks but because they see the advantage of using blackness to milk ‘white guilt’. BLM is really about controlling whites. Because blackness has been sacralized, the death of some lowlife black punk like George Floyd or Arbery gets more attention than the deaths of affluent non-blacks murdered by black criminals.

If Jews care so much about human lives, why hasn’t there ever been a Palestinian Lives Matter campaign?


If Jews talk of Jews and blacks uniting against whites, isn’t it about time whites talked of whites and blacks(or any bunch of goyim) uniting against Jews? But, as Jews control the gods, that would be ‘antisemitic’ because Jewishness is inviolably holy. Jews can put down whites and whiteness, but no one better put down Jewishness. Jews can recycle so many anti-goy tropes of rednecks, ‘racists’, Christ-tards, and etc., but woe to anyone who dares say anything suggestive of ‘antisemitism’.

Who controls the gods is of utmost importance. Consider: In the Jewish community, you could badmouth Jesus all you wanted because He wasn’t holy among the Jews. If anything, He was much reviled and it was even obligatory to demonize him. But among Christians, Jesus was the holiest of the holy. Now, how could Jesus, a Jew who was killed long ago, exert such power over the Christian West? Why did even kings and generals bow down before Him? How come anyone could be burned at the stake or tortured horribly for having blasphemed the name of Jesus? Jesus, while alive, had no worldly power and was humiliated in the worst possible way before being put to death. Yet, He came to reign over the West as the King of kings. Why? Because He was worshiped as God. 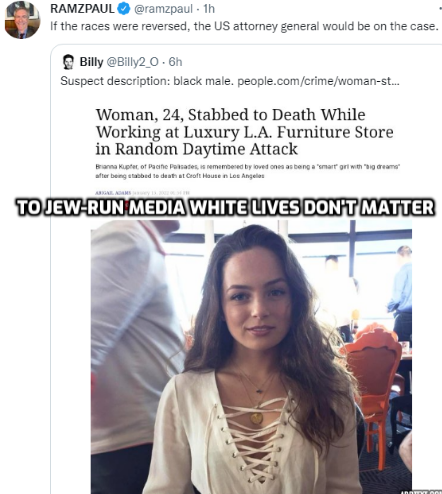 Secularism turned out to be a fraud in most cases because so-called secularists merely sought out new gods. So, Stephen King put down the Bible and Old Religion but worshiped at the feet of some Magic Negro/Negress of his befouled imagination. MATRIX also sacralized Negroes as holy, as founts of spirituality and wisdom. All those ‘well-educated’ whites who never go to church will get all weepy at the thought of St. George Floyd and volunteer to wash stinky Negro feet. They will look upon Anne Frank as the new madonna. It’s all so tiresome.

At any rate, the human mind shall always remain ‘spiritual’, and this is why it’s of utmost concern as to who controls the gods. Jews present themselves as secular and ‘liberal’, but they are really neo-theologians and propped up ‘wokeness’ as the new faith. And BLM, along with globo-homo, is meant to be the new faith for goyim. Jewish message to all goyim is “Worship blacks and homos(whom we control and fund) above everything, even your own kind.” And it’s especially directed at whites as Jewish Power relies on white obeisance.

So, next time BLM is promoted, remember that it’s really WOM or White Obedience Matters.

The history of India illustrates how crucial it is to control the gods. The Ancient Aryans who invaded India made sure they controlled the gods. They made themselves the Brahmins, the elite spiritual caste to revered and consulted by the rest. Thus, their authority over the brown natives wasn’t merely military, economic, or political but spiritual. Likewise, the Spanish remained as overlords in Latin America because they converted the brown natives to Catholicism. The browns came to worship the God brought to them by whites, who also dominated the clergy.

In contrast, the British ruled over India with political, economic, and military might. Spiritually, the British allowed for Hindus to remain Hindu and for Muslims to remain Muslim. So, while the natives admired and feared the British for worldly/material reasons, they didn’t look to the British as holy. Unlike the Ancient Aryans, the British didn’t make their authority SACRED in the eyes of the natives. And so, it was only a matter of time before they were expelled.

This is why Jews are so eager to control the gods, to weaken white identity and undermine Christianity. They must colonize the SOULS of goyim, especially of whites.
In Soviet Russia, Jews went about wrecking churches. In the US, Jews destroy Christianity by rotting its soul with BLM and globo-homo, whereby the faith is associated with worship of punkass Floyd and reverence for homo bung-donging. Any religion that goes that way becomes soul-dead. A religion losing its soul is worse than losing its body. After all, Jesus was killed in body but not in soul. Soviet Russia killed Christianity in body but not in soul. But under Jewish control, Christianity is turning into cucktianity where the new clergy put on globo-homo garb and praise trannies who cut their dicks off. 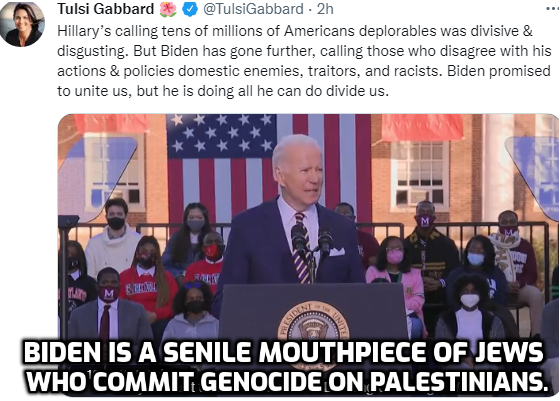 Jews seek to spiritually colonize white souls with globo-homo and BLM. And what’s truly shocking is how many whites fell for this. It goes to show that White Individualism was largely a myth. Whites were mostly conformist and obedient. Individualism only mattered at the top among the talented and creative. Most whites were suckers and schmucks. Just look at the Covid hysteria, especially among Anglos. What a bunch of cuck-tard conformists.

US is a ‘liberal democracy’ in name only. It’s a mere shell. At its core, it’s an Ethno-Oligarchy. Even if we can’t do anything about Jewish supremacist power(for the time being), we need to see it for what it is. US is a Jewish Ethno-Oligarchy, an empire of lies. And despite all the Jewish-fomented crises since 2000, things will only get worse unless the Jewish Power is named and outed for what it is. The key motivating factor behind so many recent disasters was insatiable Jewish Supremacist greed and ethno-mania. Jewish Power will never stop unless it is called out for what it really is.

If Jews bitch about ‘antisemitism’, it needs to be pointed out that their behavior gives most credence to ‘Anti-Semitic’ tropes. With so many lies spread by Jewish Power, it’s only a matter of time before people begin to question the Holocaust. If Jews lie so brazenly about so much, who's to say they didn't lie about the Shoah as well? Should we trust Jews on history when they pushed the Russia Collusion Hoax, Covid Hysteria, and BLM bullshit? 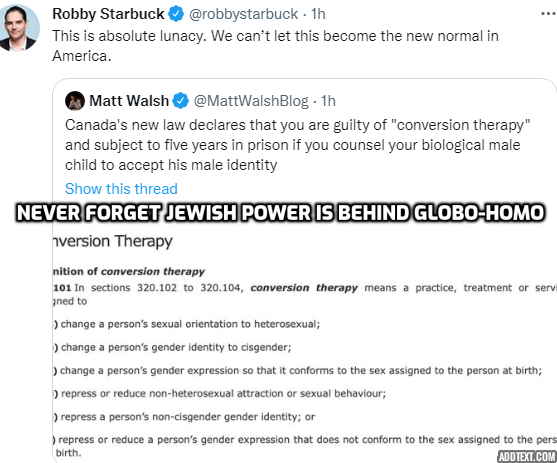