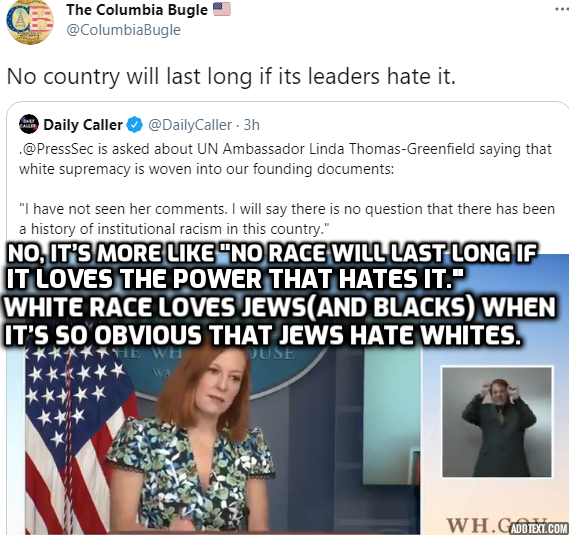 The dirty secret of America is that 'conservatives' have a Critical Race Theory of their own: Philosemitism and Hypocritical-Cuckery or Hypocruckery. 'Conservatives' will say that, unlike the 'left', they are not obsessed with race and committed to seeing-and-treating people as individuals with agency and responsibility. So, the 'left' is all about Identity Politics(usually anti-white), whereas conservatism is about colorblind treatment of all peoples as individuals deserving of equal respect and protection.

But this is utter BS. 'Conservatives' don't believe in equal treatment and dignity for all peoples, to be judged as individuals. No, they bleat about how Jews are so special in history, culture, values, ability, and etc. and therefore, Jews as an Entire Group are deserving of more respect, support, sympathy, praise, protection, favors, love, awe, and etc. Just ask any Palestinian or Syrian if American 'conservatism' is about colorblind treatment of all as equals.
In a way, 'conservative' version of Critical Race Theory(premised on Jews Uber Alles) is worse than the 'leftist' counterparts. Ironically, the so-called 'leftist' ones are actually more right-wing, i.e. they are based on tribal pride and empowerment. For blacks, CRT means more pride and power for blacks. For Jews, it means more pride and power for Jews(as if they don't have enough). This can be said for other non-white groups as well. It's about OUR interests vs YOUR interests(usually white-whatever).

In contrast, 'conservative' CRT is a wussy version of liberalism, or wiberalism. It's about white people suppressing white pride and rejecting the concept of white power so as to meekly appeal to Jews, blacks, and nonwhites to adopt colorblind individualism. This might be viable IF Jews, blacks, and nonwhites showed any interest in adopting colorblindness for themselves, but there's no such sign. Thus, it is utterly useless.
But it's far worse. If, at the very least, 'conservatives' truly promoted colorblind individualism for all, they could in good faith argue that they are opposed to the dynamics of Critical Race Theory, i.e. they defend the rights and liberties of all individuals regardless of color than promote one group at the expense of others. But even this isn't true given how American 'conservatism' favors and sucks up to Jewish Power uber alles. When have 'conservatives' been about colorblind equality between Arab-Americans and Jewish-Americans? And in foreign policy, when has American 'conservatism' been about treating all nations with equal respect? No, the GOP foreign policy has been about defaming, demeaning, demonizing, alienating, and even invading/destroying other nations at the behest of Zionist Jewish Supremacists. If 'leftist' CRT is about Jews, blacks, and nonwhites propping up their own pride at the expense of others(especially whites), 'rightist' CRT is about whites suppressing their own power/pride and cheering on Jewish pride/power as the apex of Western Values, rather funny given that Jewish Power has been most effective in destroying whatever is left of Western Civilization.

So, if 'conservatives' claim to oppose Critical Race Theory on grounds that it favors certain groups at the expense of others and rejects dignity premised on colorblind individualism, they have failed miserably with their own words and actions that clearly favor Jews and Zion uber alles. Consider the cuck-governor Abbot of Texas. He claims to be for free speech and against Big Tech censorship, but he cucked to Zionists and waged war on GAB as an 'antisemitic' platform even though the site offers free speech to ALL groups. So, in other words, GAB is evil according to Abbot the 'cuckservative' because it offers free speech and equal time to both Jews/Zionists and Palestinians(and detractors of Jewish Power). According to American 'conservatism', free speech means JEWS GET TO SAY WHATEVER and those who dare to be critical must be silenced with Censchwarzship. And was Donald Trump any better? Even as Jews spat on him and smeared him with feces, all that the orange buffoon ever did was suck up to Jews and demean Palestinians.
And even on the Dissident Right, there is a tendency to name-drop prominent Jews in the hope that, gee whiz, maybe the superior race will see the light and join with whites. It's all so pathetic the non-stop swooning of how such-and-such Jew is a Fellow Conservative or Fellow Patriot when most Jewish Conservatives are for Jews Uber Alles at the expense of whites. David Mamet is a good example. He claims to be a libertarian who sees the wrongness of statism, but he's totally for the US using all its might for Jews Uber Alles and Zionism; and his kind of libertarianism is perfectly fine with Jews amassing tons of cash and using it for Jews Uber Alles. It's all a con-game on his part. It is time to put to rest the dichotomy of capital vs the state because, in the current climate, both deep pockets and the deep state are little more than the two arms of Jewish Power. 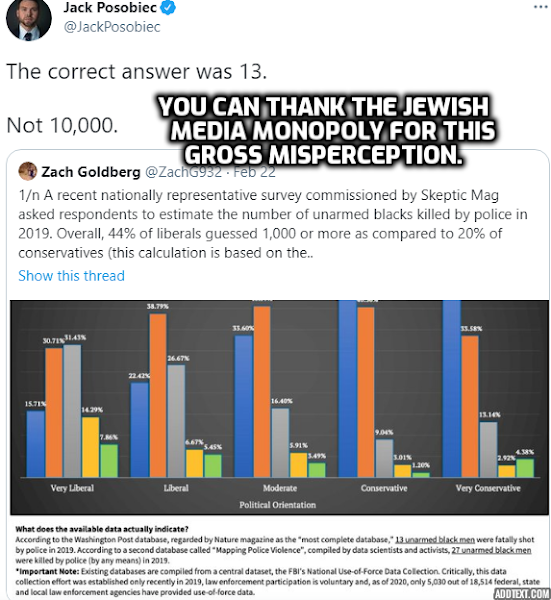 Even though 'conservatives' are most obsessed with Jews Uber Alles, they also practice a form of CRT with blacks. A black 'conservative' is treated like royalty on the basis of the person's race. What he says carries more weight simply because he's black. Kanye West has been a sick moron all his life, but he was praised to high heaven by 'conservatives' for donning a MAGA hat. Most 'conservatives' look the other way on the issue of black-on-white crime or black crime in general... unless it impacts Jews. Oh, Jewish Lives are so precious, and black violence must be condemned ONLY WHEN it hurts Jews. When blacks were attacking cities and rioting, Trump and Maga-tards were more likely to blame the white Antifa for most of the violence(as if innocent blacks were goaded to act badly by 'leftist' whites); it was just another variation of blaming bad black behavior on whites. If 'leftist' whites blame 'racist' whites, 'rightist' whites blame 'leftist' whites. Apparently, blacks have no agency to act bad on their own.

According to 'conservatism', it was an unforgivable sin for Americans to have discriminated against blacks, BUT it's totally 'conservative' to support Zionist apartheid, Jim Crowitz, and mass brutality against Palestinians. It's so obvious that 'conservatives' practice a group-identity politics when it comes to Jews. Even when 'conservatives' acknowledge that Zionists can act brutally, they justify such violence on grounds of History. So, Jews are not to be judged as individuals doing bad things to Palestinians but as a group whose tragic history justifies their harsh oppression of Palestinians and wanton destruction of Arab/Muslim nations(even though the Shoah was the doing of Germans, not the Arab-Semites and Persians). What's the difference between such philosemitic logic and the justification for black mayhem? You see, it's 'muh history'. Blacks are right to riot and loot because of 'muh history', and Jews are given license to wreck and destroy entire nations(and ruin millions of lives) because of 'muh history'. Apparently, crushing Palestinian aspirations for nation liberation is justified by the Never Again cult. But did Palestinians run the Treblinka camps? The notion that the Holocaust Card gives Jews-as-a-group license to commit countless acts of violence against the world is hardly different from the logic at the core of Identity Politics. So, any 'conservative' who claims to oppose and denounce CRT should look in the mirror and abandon his own Philosemitic version of CRT that says Jews as a group should be allowed to run amok as they please because... 'muh history'.

Financial de-regulation and national legalization of gambling have led to a massive Jewish looting operation. Insider Jews rig the game and rake in gazillions. And Jewish casino monopoly means goyim are turned into degenerate gamblers and hand over their hard-earned money to Jewish oligarchs like Sheldon Adelson and others who used pressure to get Jewish crooks pardoned from jail. It's no wonder Jews support BLM. Jews get to loot the economy from the top, and blacks get to loot the economy from the bottom. Jews use their loot to finance black looting, and Jewish Power rubs 'white guilt' in all this mess. The understanding between Jews and blacks is Jews will fund and defend black pillaging IF blacks used their demigod status to support Jews and Zionism, thus providing moral cover for what Jews do to Palestinians. "Gee, how can Zionism be bad when Jews are allied with the People of MLK?" And of course, both are protected by 'muh history'. We can't denounce Jewish looting because it'd be 'antisemitic', and we can't denounce black looting because it'd be 'racist'. Jews are forever the holy holocaust people, and blacks are forever the sacred slavery people, as if genocide only happened to Jews and slavery only happened to blacks. But there it is, Jews have effectively monopolized genocide-sanctity and blacks have monopolized slavery-sanctity(with help from Jews, of course). So, whites are robbed from top and bottom, but what do white 'conservatives' have to offer? "Uh duh.... it's the communists and the Chinese! We must protect rich capitalist Jews from socialists!" "Uh duh... white Antifa are making good decent patriotic blacks riots and loot." "Uh duh, Joe Biden is an Anti-Semite because he might make a deal with Iran. Israel forever!" Ridiculous. 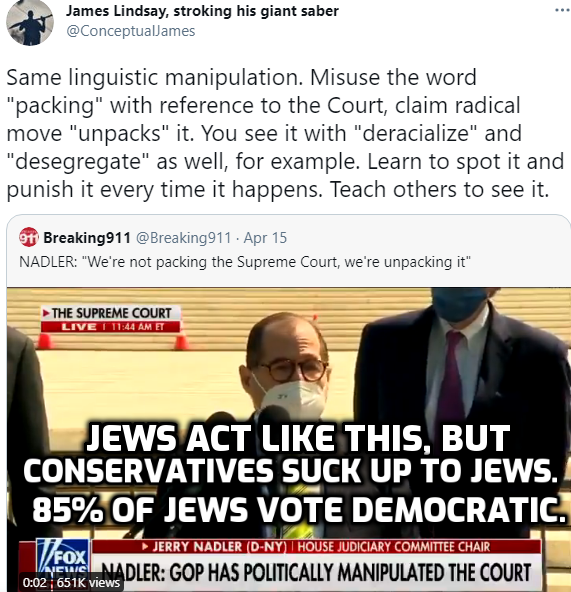 TUCKER CARLSON CALLS OUT JEWS FOR HAVING DOUBLE STANDARD ON DEMOGRAPHIC CHANGE AND IMMIGRATION
at April 16, 2021