White Liberation must be based on Man-Mentality, NOT Dog-Mentality — Charles Murray is Worthless because, even as he speaks for White Welfare, his Innermost Emotion is Dog-like Servility to the Jewish Master 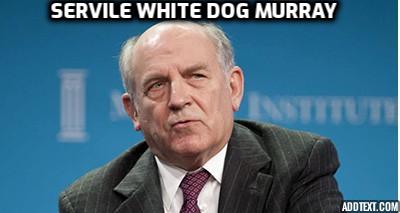 It all comes down to whether one has man-mentality or dog-mentality. When a man believes something is right and wants it, he feels it in his bones. He tries to get it, and it's not matter of what others think. He prioritizes what HE feels to be right and righteous. He has autonomy, agency, and independence.
In contrast, no matter how much a dog wants something, the desire takes backseat to the dog's need for the master's approval. This need for approval stands between the dog and what it really wants. No matter how much the dog wants something, it won't run after it IF the master will be displeased.

This is why Charles Murray is ultimately worthless. He has a dog mentality. He may want good things for white folks in a country defined by liberty and civic nationalism, but when push comes to shove, this Biden-voting lowlife scumbag's innermost emotion is abject servility to the Jewish Master. (I can understand Murray despising Donald Trump and not voting for him, but how can anyone who cares for America vote for Joe Biden? Only a status-starved craven scumbag who wants to be invited to cocktail parties.)
Because of Murray's dog-mentality, even what he wants very dearly — decent treatment of white folks like himself — must take backseat to sappy servility to Jews and eagerness to win their approval. So, even as he lays out the argument for innate racial differences, it all comes down to, "I'm doing this for YOU, my Jewish Master. It's to prevent the rise of white consciousness lest it challenge your deserved Chosen-People supremacy over us inferior goyim." What a worthless cuck pile of dung. We can't have such dogs to speak for the white race. A true patriot must be pro-white because he feels it in his bones. Because it is his innermost desire and passion. All his thoughts and actions must flow from his pride of whiteness. Anxiety about Jewish Approval must not stand in the way between him and his desire. 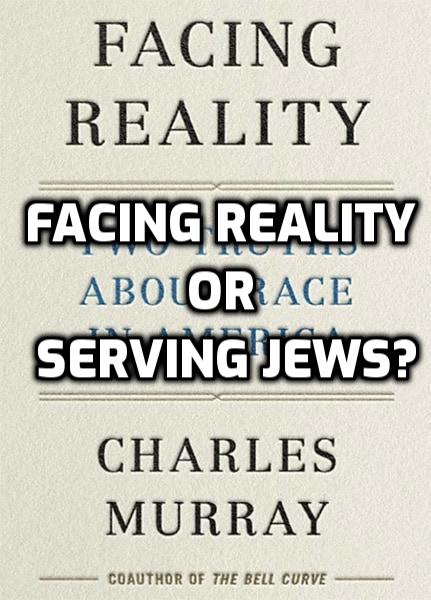 When a man wants to hunt rabbit, he does so because he wants to. He doesn't look over his shoulder for approval. In contrast, even when a dog is most eager to hunt rabbit, it first looks over its shoulder for the master's approval. If the master signals NO, the dog refrains from its biggest desire because its innermost emotion comes down to servility to master's approval and abject fear of his disapproval. Murray is just a white dog, a pathetic hound.

But then, Jared Taylor isn't much better. Unlike Murray, Taylor will express pride of whiteness and need for white interests. But when push comes to shove, he is ever so fearful of spelling out that the main enemy of white consciousness and white liberation is Jewish Supremacist Power. He's not full-dog like Murray but is nevertheless half-dog.
One of the unfortunate aspects of HBD is IQ-centrism. As Jews both count as white and possess the highest IQ, there's this ridiculous awe laced with sentimentality that dreams of a magical Jewish-White Alliance, especially useful to whites as Jews come with moral shield as the Holy Holocaust people: "How can we HBD people be 'racist' or 'antisemitic' when Jews are on our side?" Keep dreaming! But philosemitic HBD clowns do keep dreaming and hoping that their position may gain the seal of approval of the Jews with higher intelligence and holier morality points. It's dog-think.

White Consciousness and Liberation must be based on man-think. White people must want what they want regardless of what Jews think, feel, or demand. If Jews want to join the White Liberation and Empowerment Movement, fine, but if not, the hell with them. If whites want to hunt rabbit, they should just do it. Don't look over the shoulder for approval from the Jewish Master. That is White Liberation, the only real path to freedom and power. Especially when Jews are calling on black thugs to hunt whites, whites shouldn't need permission from Jews to go hunting and choosing their own targets.

By the way, it's not enough to mention higher crime rates among blacks. The real problem is BAMMAMA or Blacks Are More Muscular And More Aggressive. Reality is race-ist, and evolution produced different races. Blacks evolved to be more muscular, more aggressive, wilder, and less inhibited. THAT is why they act the way they do, and that has been the cause of White Flight and Jew Flew from blackening areas.
But because Jewish Supremacists need to keep whites in submissive mode in servility to Zion, Jews concoct horror stories about 'systemic racism' to paralyze white folks with 'white guilt'. This is all very amusing since Jewish bankers funded much of Western Imperialism and Jewish merchants played a role in the 'genocide' of the American Indians. Jews were also the biggest sellers of opium to the Chinese, destroying millions of lives(and recently Jews peddled opioids to the white working class, leading to the deaths of 100,000s of whites). Jewish Bolsheviks worked with Josef Stalin to kill millions of people. And of course, Jewish Power ethnically erased the Palestinians in the tragic Nakba, and the Jewish-led Wars for Israel effectively led to the ongoing Arabocaust in which over a million Arabs and/or Muslims have died. So, where is Jewish Guilt in all this? Jews feel NONE. What a vile bunch of people, and yet, sucking up to Jews is the highest value in currently sicko America.

JEWS AND AMERICA - MOST FACTUAL 40 SECOND CLIP YOU WILL FIND