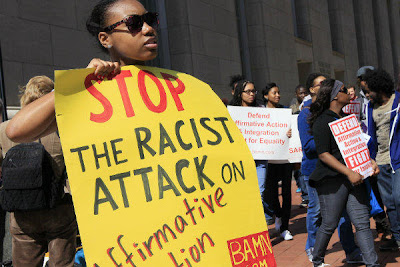 This is in response to a piece "Poison Ivy—The Ups and Downs of Affirmative Action" by Blaine Greteman in the New Republic magazine.

Affluent black students found that well-intentioned faculty members assumed that they were poor, and more obnoxiously, the fact of racial preference in admissions led some white students to question the intelligence of minority students. Black students also reported judging by this same poisonous standard. As Christopher, an affluent black student recounted, he sometimes held his black friends in contempt when they failed to meet his academic expectations: “How did you get in here? It must have been because you’re black.”

Greteman here employs the trick of adjectology to force his viewpoint on the reader. Notice the choice of words, "obnoxiously" and "poisonous". Now, liberals pride themselves for their reliance on reason and facts to make their (superior)case, but if you've noticed lately, liberals often take the short-cut of adjectology to end discussion via the toxicological method. (I will henceforth refer to this kind of liberals as decalibs as liberalism, as generally practiced today, is about as decadent and desperate as any ideology can get. And don't be fooled by the victory of Obama in 2012. It had nothing to do with the ideological or intellectual triumph of liberalism and everything to do with the demographic rise of anti-intellectual blacks & Hispanics who voted simply for more freebies and with the cultural dementia of a young generation bred on junk culture and politically correct indoctrination. I will not refer to today's so-called 'progressives' as 'leftists' for, even as I oppose the Left, leftism used to be a struggle for important issues such as workers' rights and greater justice for all under the law. What goes by the name of leftism today mainly serves the interests of globalist Jews, snotty pampered 'feminists', and privileged gays.)

Notice Greteman doesn't explain why the views of white students are 'obnoxious' or why the views of rich black students are 'poisonous'. He offers no argument, no facts. He just condemns certain views as toxic. He doesn't want a debate or discussion. He fumes like a bitch and just wants us to shut up. What kind of liberalism is this? Just how are the ideals of reason and fact-based reality served by some self-righteous prick fumigating the readership with the notion that certain ideas--indeed certain attitudes and emotions--simply must not be allowed. And why not? Well, because Greteman finds certain views 'obnoxious' and 'poisonous', end of discussion.

Now, I don't know if Greteman is doing this consciously or subconsciously, but he is part of the decalib movement to stamp out certain feelings, attitudes, and views by condemning them as diseased, infectious, pathological, or toxic. Indeed, 'toxic' is now one of the most oft-used words by decalibs--along with 'noxious' and 'odious'. So, you'll read an article by a decalib where something or the other will be denounced as being 'toxic', 'poisonous', 'noxious', 'obnoxious', or 'odious'.  The favorite words of liberals used to be 'rabid' and 'virulent', but maybe they're a bit worn. Maybe 'noxious' and 'odious' have a certain SWPL ring to it.

You will notice that decalibs offer no explanation, no reason, and no facts as to why certain views, attitudes, or feelings are 'toxic', 'poisonous', 'noxious', 'obnoxious', or 'odious'. By the mere use of those adjectives, they feel they've won the argument, and nothing more need be said.
Now, I ask you, since when does reasoned debate and assessment of reality work this way? And what is so open-minded about such use of adjectology if indeed liberals take great pride in their open-mindedness?
And if indeed liberals care so much about facts, why are they so obsessed with adjectives, most of which describe emotional states than objective facts. I can say, 'gays are obnoxious and toxic', but what does that prove? It only means I feel that way. If I say, 'Jewish finance capitalism is dirty, filthy, craven, venal, odious, noxious, obnoxious, poisonous, toxic, and/or venomous', all I've proven is that how I FEEL about Jews. Unless I offer facts and reasoned argument to make my case, all my adjectives are just that: adjectives describing my emotional states.
So, if liberals are rational and fact-based, why do they rely so much on adjectology? Why do they take a toxicological approach to ideas, speech, debate, discussion, and etc. as if certain views shouldn't even be argued with but simply gassed to death?  It's almost as if decalibs regard certain views and ideas as disease-carrying like sewer rats and must be exterminated by adjectological fumigation. Ideocide?
But what does adjectology really prove? A Jew can say 'radical Islam is toxic' and a Muslim can say 'Zionist racism is toxic', so who won the argument? As the saying goes, opinions are like a**holes, everyone has them. But even opinions are better-formed and argued than the mere use of adjectives, which is what Greteman goes for.
A Muslim and a Jew insulting one another with adjectives only proves that the Jew hates certain Muslims and that the Muslim hates certain Jews but without explaining the why and for what.

I believe some decalibs know full well what they are doing when they employ adjectology. With the rise of the science of psychology, advertising, marketing, and the like, many experts in the academia and media now understand what works in swaying public opinion and manipulating mass sentiments. The controllers of the media and academia are less interested in using facts and reason to win us over to the truth than in pushing the right 'irrational' buttons in our psyche to make us conform to their agenda. Advertisers know all about subliminally toying with the circuitry of the mind. Hollywood has perfected the formula of blockbusters by offering the right combination of sound, images, symbols, and effects. Music industry approaches music less as an art than a science of what kind of rhythms and beats will produce the biggest hits. Indeed, the 'science' of celebrity-making has been perfected to such extent that a nobody can become a somebody simply by the way the media packages and hypes him or her. Indeed, even a president can be elected this way by the new scientific method of celebrity-oriented cult of personality. People can be made to believe that style is the substance if certain buttons in their psyche are pushed.  We are all guinea pigs in the new order.

Even so, one would like to believe that in an intellectual magazine like the New Republic, a writer would offer sound reasons backed up with facts to prove his case that certain views, attitudes, and feelings are 'obnoxious' or 'poisonous'.

I wonder, did Greteman use adjectology consciously because he knows of its effectiveness, or is he one of the guinea pigs indoctrinated by political correctness who 'thinks' without really thinking? Is he one of the lab scientists or just one of the guinea pigs?
The dirty secret of the modern liberal understanding of human psychology is that most people, regardless of ideology/race/creed, are followers than free-thinkers. And this isn't simply a matter of intelligence. It's a matter of personality and human nature. The kind of personality that 'pathologically' insists on forming its own thoughts regardless of what others think is relatively rare. Due to human nature, most people wanna be liked and want to belong. They don't want to be shunned or left out of the community. Evolution made us this way, and so, even intelligent people who ought to know better will go along with the prevailing falsehood if it's to their social advantage and psychological well-being(and being liked by others is central to that feeling of well-being).

Now, let us consider the facts. 'Affirmative action' does indeed favor less qualified and less intelligent blacks and Hispanics over whites and Asians. This cannot be refuted. All evidence points to this, and indeed, it is a defacto official policy. If Greteman denies this, he should offer evidence to the contrary, but of course, he cannot.
Now, if universities admit a sizable number of blacks with considerably lower grades than whites and Asians, why would it be wrong, let alone 'obnoxious', for white and Asian students to feel that some of the black students on campus didn't make it on merit and don't belong there? Why would such a feeling be 'obnoxious' if it's based on facts and reasoned observation? It seems to me that the truly obnoxious one is Greteman who thinks he's so morally superior that he can condemn others as 'obnoxious' for the simple fact of noticing reality for what it is.

To use a counter-example, we all know that blacks, being naturally stronger and faster, dominate football and basketball. Suppose in the name of 'diversity', 'inclusiveness', and 'equality', a bunch of less qualified Mexicans, Asians, Muslims, and Arabs are allowed on college teams. Suppose black athletes believe that many, if not most, of the the non-black athletes have been favored for reasons other than athletic merit. Would it be 'obnoxious' for black athletes to feel that way? If we follow Greteman's logic, yes, it would be. But of course, Greteman--probably a Jew by the look of him--is probably the kind of decalib who plays the game of 'who, whom' when it comes to passing judgement on the world. Since blacks are part of the 'victim group', we must never ever have any negative feelings toward them, but it's okay for blacks to feel all the rage, hatred, paranoia, and hostility toward other races.

Indeed, 'who, whom' applies to the entire world, and surely Greteman knows this as he writes for the New Republic, one of the biggest hypocritical Zionist mags in the world. As you know, Iran has no nuclear weapons--not a single one--and has complied with every international inspection. Israel, in contrast, has violated every law and has anywhere from 200 to 500 illegal nukes. Israel also oppressesd Palestinians just like Nazis oppressed Poles and Jews. But US, which is controlled by Jewish power, uses its muscle to economically destroy Iran while the criminal state of Israel receives billions in aid from American taxpayers every year. And the New Republic is fully behind this state of affairs. Now, THAT is obnoxious, poisonous, toxic, odious, noxious, and everything else under the sun. But do you think Greteman will ever approach the editors of the New Republic and ask for permission to write an article about how Zionist-Americans have perverted US foreign policy?  Of course not... as he's too busy pointing out that people who notice the truth on college campouses are 'obnoxious'. So, if white and Asian students rightly feel that a lot of blacks in colleges were admitted by racial preference, they are 'obnoxious'. And if smarter blacks in college who really made it on merit feel that blacks who made it on 'affirmative action' undermine the black intellectual brand, they are under some kind of 'poisonous' delusion.

I don't know if Greteman is a Jew or not, but he sure looks and sounds like one. For starters, he's a total hypocrite as the real outrage in American higher education is that Jews, who make up only 2% of the population, hog an OBNOXIOUSLY disproportionate share of elite positions in academia, media, law, finance, entertainment, government, courts, publishing, and etc.  It's Jew, Jew, Jew everywhere.
If Greteman really cares about fairness, he should call for Jews to be categorized as a separate group so that white gentiles can finally have more positions open up to them at the expense of overly privileged and powerful Jews. And if any Jew were to complain that a less intelligent white goy was favored over the smarter Jew, I mean let's not be 'obnoxious' and 'poisonous' about it.
at December 04, 2012